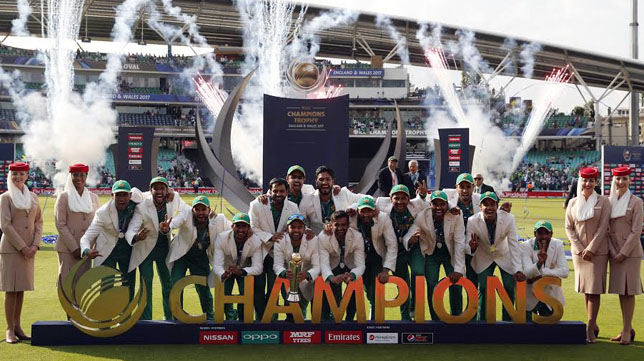 Well done and well played in a highly competitive environment, while facing lots of onslaught on electronic & social media from across the border, as well as from some self-styled experts within the country. So well braved too! One must appreciate and felicitate our boys in green.

While so much has been said about the win, unexplainable incidents including Ramzan factor, a catch of a no-ball, bails not dislodging after ball hitting the stumps. To top it off, the best Indian batsman was dropped, and then dismissed on the very next ball with a catch of the day! So on and so forth.

Well done and well played in a highly competitive environment, while facing lots of onslaught on electronic & social media from across the border, as well as from some self-styled experts within the country. So well braved too! One must appreciate and felicitate our boys in green.

Nothing makes a blind bit of sense, key characters appear out from nowhere, supernatural forces are at work and inanimate objects can talk.” Yes, Pakistan Team’s performance that day can be attributed to such an imaginative work of art that cannot be explained!

But, I would like to tread upon the cricketing path, and attempt to bring about some reasoning to the unexplained. Though, I am myself convinced of the happening out of the blue, during the final encounter. One reason being that the media never expected the boys in green to perform! or portrayed the Indians as an invincible team!

Not realising the fact that (every) Pakistan Team has been known for this unpredictable and mercurial quality over the decades, strictly in accordance with “Cricket is by chance”, if one understands what is meant by chance!

Let us be magnanimous in giving credit where it is due. I feel credit must be given to the Selectors for selecting such a young and talented yet untried team. Praise must be given to the talent of the boys, who when tried and given an opportunity to prove, proved their mettle without an iota of doubt! Further acclaim must be given to the captain, who believed in their ability and prowess to devotedly commit towards team effort.

In addition, I am sure that he must have given them confidence through a pep talk before every match. Lastly, utmost credit must be given to the coaches and backroom staff for their efforts in inculcating the boys with their experiences on and off the field. I believe that the coach and captain would have briefed the boys after having lost their first encounter with the defending champions.

A lesson to learn must have been the topic aimed at motivating and infusing spirit to fight back, knowing fully well that talent is present in abundance. Lastly, credit must be given to Senior Management of the board, and the National Selection Committee for restraining from undue interference during the tournament.

Having paid well deserved tribute to all concerned, I now wish to get to my subject of “Let Sanity Prevail”. Fundamentally this is my concern relating to the way the game and the event was promoted in the electronic and social media, especially in those so called Cricket Chat Shows. Their anchor persons whose language and the content not only fall in the area of “it’s not cricket” but it is also not cricketing parlance.

Alongside this, the language used was certainly un-gentlemanly. The worst was the competition between two countries TV Channels in this indecent idiocracy, resulting in promoting hatred amongst the common fans of the game and the players, and not the understanding of the game and its spirit as a sport that is supposed to make friends and not foes.

In our desire to claim high TV ratings and to supposedly promote the game to a wider audience, we have somehow overlooked the norms of the game and its finer points. Cricket, more so than any other sport has been known to be a gentlemen’s game! It was so, even with the commoners.

The white uniform, the blazer and the club tie, dictated certain level of behavior and some unwritten laws towards enjoying and letting the crowd enjoy the game. Perhaps this is the sign of the changing times. Though, introduction of day & night limited over game, the T20 added greater excitement for the new generation of enthusiasts, bringing in a certain level of flexibility towards the dress code, but surely that does not mean a change in values of the game itself!

This dog fight on electronic and social media must now come to an end. Either voluntarily, or forced upon them by the Regularity Bodies on both side of the fence. Alternatively, we the cricketing enthusiast must publicly denounce this sort of unscrupulous reporting & presentation of the game. I cannot help quoting yet another very sensible piece from an Indian writer in Times of India—M.S. Sharma.

The electronic and social media instead of promoting these values of the game, and learning from the arch rivals England & Australia on how to create an environment of yearly Ashes between the two countries, or from the West Indies, the Rulers of first two the World Cups, having to lose the title at the hands of Indians in 1983. Did their media created ruckus or their houses back home were attacked by mobs?

It is time to ponder! Especially by the new breed of sports scribes and anchors, who are probably under pressure for “rating” of their shows! May be they will be better off taking up few short courses on Reporting and Anchoring. Creative treatment to reporting and presentation could not meet up with challenge of the mushroom growth either. On the Indian side this breed took to the Bollywood style of language (sorry, slang not language) and forced their Pakistani counterparts to denigrating their beautiful language in an attempt to match to their level of response.

Since, on both side of the border there has been mushroom and unchecked growth in the electronic media, while the Regulatory Bodies were found with their pants down as regards to their editorial control!

Pity that no one realised what damage they are inflicting on the masses and their audience. And, in return demeaning players on both sides to listen to the reaction on the street, instead of being praised and looked up to. There is enough material available in print and video clips on social media which supports my point.

This dog fight on electronic and social media must now come to an end. Either voluntarily, or forced upon them by the Regularity Bodies on both side of the fence. Alternatively, we the cricketing enthusiast must publically denounce this sort of unscrupulous reporting & presentation of the game. I cannot help quoting yet another very sensible piece from an Indian writer in Times of India—M.S. Sharma.

I quote, “Today, we saw the defeat of people who were arrogant in one victory and took a jingoistic approach to the game. Today was the defeat of hyper-nationalism, of jingoistic news anchors, commentators, ex-cricketers- basically anyone and everyone who turned this match into another opportunity to ridicule and insult Pakistan. It was a defeat of those war-mongers who spew venom online and offline and turn every India –Pakistan match into a proxy battle.”

The game of cricket calls for a code of conduct & behaviour and this must be spelt out loud and clear to the media before any future tournaments. The right to News & Reviews must adhere to the code of conduct and or else face legal implications. Last, but not the least. Let all fans without cast, creed and nationality sign a petition in favour of saving this great game from the wrath of those who do not understand the game and its rich historical values and significance.