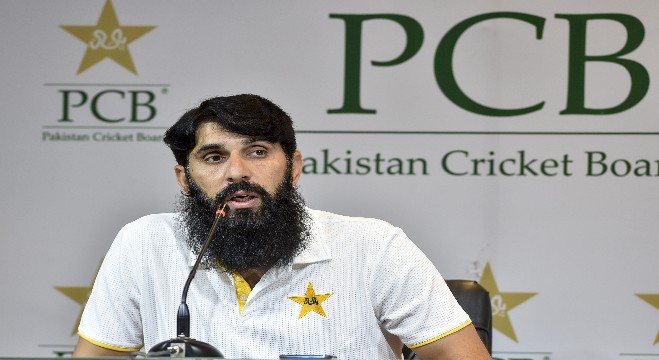 Appointment of Misbah-ul-Haq as head coach and chief selector stirred a controversy in the country. Views were, however, divided. For most critics it was hard to accept the beginning of a new experience in Pakistan cricket.

Some strongly felt that Misbah was too small for the post and it was too early to give him such a huge responsibility. They also recall Misbah’s defensive style who was dubbed as Mr. Tuk Tuk. However, Misbah is not short of followers who hailed his appointment.

Those who couldn’t digest Misbah’s appointment have their own arguments or a definite agenda. A couple of critics were themselves interested to grab the lucrative job and they had initiated a media campaign against Misbah.

We know that a lobby of media persons, looked after well by a controversial former all-rounder, had also remained against Misbah during his career and for them it was hard to digest double role given to the former captain.

Nevertheless, Misbah’s supporters reminded them that he was a former Asia Cup winning captain, PSL winning captain and the first captain who defeated South Africa in their backyard in a bilateral ODI series.

Misbah took captaincy at a stage when we are facing spot-fixing charges and yelling of hostile crowd everywhere in the cricket world. Nevertheless, amid his cool and positive presence in the field he shielded the team and boosted morals of his boys.

He handled them well, led from the front and used his calm personality and performance (Tuk Tuk) to save and win some matches for Pakistan. Recall that Pakistan was number one Test team under him. Misbah was unfortunately and wrongly dubbed as Tuk Tuk in his career. Yes, like many of his critics and fans I too observed Misbah’s Tuk Tuk in some matches where he consumed more balls to score less.

What could Misbah had done other than Tuk Tuk when wickets would start falling at the other end. Kudus to Misbah. If that is then what Misbah’s critics would say about his fastest 50 in the limited version of the game!

True that Misbah has no coaching experience at any level but they forgot that Misbah earned this title through his sheer hard work and serving Pakistan cricket with distinction. So he deserved a top position after retirement.

However, I am not concerned about what critics rightly or wrongly say about Misbah. I am also not concerned about his exorbitant salary package. My concern is Misbah’s performance. He has just started his innings but unfortunately made mistakes in the beginning.

The PCB had arranged a physically grueling Conditioning Camp under him at the NCA aiming at preparing players for the season ahead. Umer Akmal, Ahmed Shehzad and Fakhar Zaman were not part of that Camp. However, it gave me huge surprise when Fakhar was included in the ODI team against Sri Lanka.

Misbah defended Fakhar’s selection, despite of his poor show in the WC-2019, saying: “No doubt Fakhar’s performance has gone down, but still his average is around 47 in ODIs”. This means Misbah, like previous selectors, would also select players with the help of his laptop because such stats are found on computer.

The ground realities, however, are different. Fakhar’s selection is sheer violation of discipline. This is an example of blatant injustice to those, particularly with Abid Ali, who attended the Camp in sever humidity at the Gaddafi Stadium. This is a reflection of weakness in Misbah’s personality who perhaps surrendered before a powerful lobby within PCB.

Fakhar’s inclusion also substantiated critics’ view that Misbah carried a defensive approach and he was not ready to lose against a weak Sri Lankan team. Misbah will have to assert!

Though Misbah didn’t include Umar Akmal and Ahmed Shahzad in the final 16 for ODI series against Sri Lanka yet they would get a place in T20 series. Both Umar and Shahzad are undoubtedly talented but also notorious for breaking and spoiling discipline of the team.

There is a contest between them that who would succeed controversial Shahid Afridi who was a chronic trouble shooter. We can only pray for Misbah that he may succeed to discipline the duo!

Home series against a weak Sri Lanka team is certainly not a test for Misbah as a coach. Let’s hope that Misbah, who doesn’t care media, would quickly rectify his shortcomings and build a strong team to field in the forthcoming T20 WC in Australia which would be his real test.

He must be aware of, and I am sure he is, that nobody would remember forever that he was the most successful captain, or he led Pakistan cricket when our players were under strict surveillance and faced a barrage of malicious slogans throughout the cricket world, after the sordid incident of spot-fixing involving Salman Butt, Mohammad Asif and Mohammad Amir. At the end it would be his performance (in his new role) that would matter.