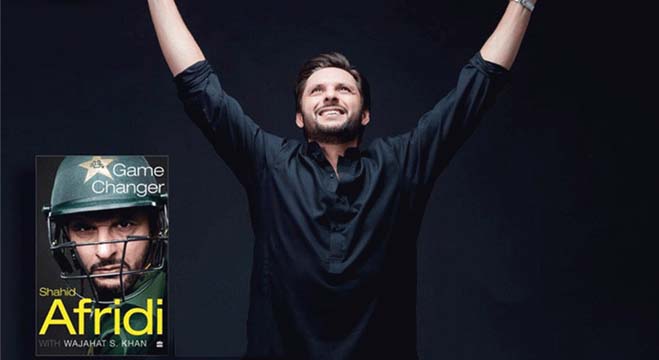 Many believe that Shahid Afridi’s book has stirred a controversy involving past heroes, his original age and beforehand information about 2010 spot-fixing scandal but to many others including me it did tell us how small the author is who carried his smallness throughout his cricket career. Average people like Afridi only live through controversies because otherwise they don’t possess any magic to befool others.

In his book Afridi dared to term Javed Miandad, a great cricketer but a small man. Miandad has avoided argument with an idiot and left it to the Heavens to answer allegations leveled against him. Afridi also wrote harsh words against Salman Butt, Mohammad Asif and Mohammad Aamir in his book but they have also avoided to response.

Nevertheless, only former Test opener Imran Farhat demonstrated courage and publicly criticized Afridi. He lashed out at Afridi for leveling allegations against Miandad and accused him (Afridi) that he always blackmailed PCB on sponsorship issues. Imran was quoted in media that it was Afridi who could do anything for his personal interest.

How could PCB temper with his date of birth? It was a criminal act on Afridi’s part to remain silence for so long about his original date of birth only to keep his world record, being the youngest to score a century in international cricket.

I would wish former Test cricketer Hasan Raza should also come out with his original date of birth which snatched world record from Mushtaq Mohammad, as the youngest cricketer who played a Test match. It is alleged that a former batting wizard from Karachi had committed that immoral tempering only to deprive Mushtaq his world record.

Afridi’s revelation on the 2010 spot-fixing scandal involving Pakistan cricketers Salman, Asif and Amir is simply ridiculous. He revealed that he was already aware of it. He made an interesting story which says that Mazhar Majeed had given his phone to a shop for repairing and the shopkeeper turned out to be his friend of friend.

The shopkeeper had shown him the messages of Mazhar Majeed for Pakistani cricketers. (This also shows us Afridi’s level of contacts) He also claimed that he showed the proof to the team management which expressed its helplessness. He claimed that he also shared the messages with Waqar Younis.

Afridi has tried to belittle former greats of Pakistan cricket but as the proverb goes, slings down on the sky, he has been contemptuously criticized, especially on social media. Two pictures of Shahid Afridi are viral on social media. In one he is seen dinning with Rao Anwar, the notorious killer of many in fake Police Encounters and the other is with Uzair Baloch, another brutal killer from Liyari. The caption of these two pictures is: “Have Afridi mentioned these two friends of him in his book”.

Many of Afridi’s team mates apprised me on the condition of anonymity that he carried a criminal mind throughout his career. He was notorious in revealing conversations of dressing room/team meetings to his favorite sports journalists. “He would quietly leave the meeting, go to the washroom and SMS to his media friends”, one of his former colleagues alleged. And same journalists supported Afridi in print and on electronic media whenever he performed badly. Afridi played his last few years of his career only through courtesy of his media friends.

Misbah would be remembered for his many brilliant innings he played under pressure to bail Pakistan out of trouble. And Afridi would be remembered as a cheater who chewed the Cherry in the middle of the ground during the course of an international match, and who danced on the pitch in the Iqbal Stadium, Faisalabad.