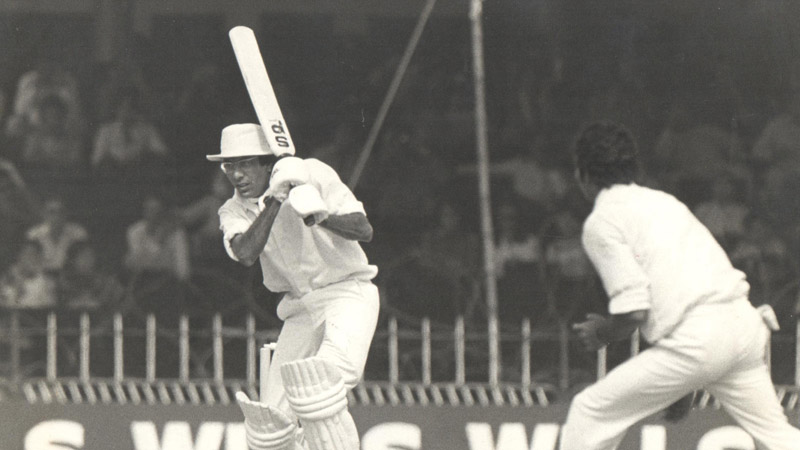 There can be varied opinions about who is the best ever batsman to emerge from Pakistani soil. But when it comes to flair and panache the choice is immediately narrowed down to two batsmen both of whom graced the cricketing greens together for the majority of their careers. Yes I am referring to Zaheer Abbas and Majid Khan. A stylist to the core, Zaheer nevertheless possessed an astounding hunger for runs. Once he got in, Zaheer rarely looked like getting out. He never got bored of reeling off runs irrespective of the contest and quality of opposition bowling. Reaching a hundred signals a lapse in concentration and focus for the majority of batsmen. For Zaheer, it was just time to take a fresh guard and move on like a perpetual motion run machine. A ruthless accumulator, Zaheer remains the only Asian to score 100 plus first-class hundreds and his tally of 34,000 plus first-class runs in not likely to be surpassed by anyone from the sub-continent. Whenever Zaheer touched prime form he dominated the bowling attacks like no one else could.

In one series of three Test matches Zaheer clobbered them to the kingdom come. Prasanna never played for India again and Bedi and Chandra lasted less than a year after that mauling by Zaheer before bowing out unceremoniously from the Indian team. Only Venkat, who was fortunate enough to sit on the bench during the 1978-79 Pakistan Test series carried on playing for India in the following years. Zaheer’s tally of 583 runs in that rubber was a new world record then.

Zaheer was solely responsible for the dismantling of India’s fabled spin quartet of Bishen Bedi, Erapalli Prasanna, Bhagwat Chandrashekhar, and Srinivas Venkatraghvan. For more than a decade these masters of tweak and guile bewitched the world weaving their webs of deception.

Zaheer in full flight at the batting crease was a sight to behold. Carving the bowlers with his pronounced back lift. His specialties were his sublime cover drives, on drives and audacious pulls which endeared him to his opponents as well. Sunny Gavaskar is a big fan of Zed, as he affectionately refers to Zaheer.

Talking in a TV show post-Zaheer’s induction in the ICC Hall of Fame, Gavaskar stated that he actually enjoyed watching Zaheer bat even at his team’s expense due to the sheer elegance and class of the man. Zed had a hunger for big runs and was never satisfied with a fifty or a hundred, Sunny added. He was always on lookout for a double and beyond. Zaheer arguably remains the most loved Pakistani cricketer in India and this bond was further strengthened when he tied the nuptial knot with his dear Indian spouse Sam Abbas.

When the Indians returned four years later in 1982-83, Zaheer again displayed his fondness for the Indian bowling attack and this time around proved to be their nemesis in both Tests and ODIs. The Test series is better remembered for Imran Khan’s magical reverse swing which fetched 40 wickets on Pakistani featherbeds and leadership, but Zaheer’s six visits to the batting crease yielded an equally astonishing 650 runs and were studded with three tons including his fourth Test double hundred. That double ton was incidentally Zaheer’s hundredth first-class hundred and he became only the second batsman after Geoff Boycott of England to reach this milestone in a Test match. His fairy-tale batting form spilled over in the one-day format as well where Zaheer became the first batsman to score centuries in three successive matches. This also took him to the number one position on the ICC ODI ranking for batsmen. In fact, his total of 931 ranking points at that time has only been exceeded once in ODIs and that too by the master blaster Viv Richards.

Zaheer Abbas has made a belated entry into the ICC Hall of Fame last month when he was honored alongside Jacques Kallis and Lisa Sthalekar. He is only the sixth Pakistani cricketer to be inducted so far after Imran Khan, Wasim Akram, Hanif Mohammad, Javed Miandad, and Waqar Younis. This overdue honour is yet another feather in the cap of a bespectacled stalwart of the seventies and early eighties. “I feel privileged and humbled to be inducted” was his simple comment. Zaheer was also the last person to have the distinction of being an ICC President in 2015-16 before the post was abolished altogether. This appointment underlined the respect which Zaheer carried in the international cricket community.

There were no middle roads for Zaheer. He either had a purple patch or a lean patch, never a middling series. His Test record against the future “Big Three” is outstanding. With the exception of one odd series he always scored big against India. Ten out of his twelve Test hundreds were against India, England and the Aussies. While all other batsmen feasted on weak New Zealand bowling, Zaheer had a run of low scores against them and the West Indies.

In the ODIs his form was though extremely consistent right through his career. He was one of the early greats of limited-overs cricket and his seven centuries in ODIs were a benchmark for others to follow.

Records chased Zaheer like no one else. The man was a statistician’s delight. In addition to being the highest first-class scorer from the sub-continent and the only one with 100 plus first-class hundreds, Zaheer was the first Pakistani ever to reach the landmarks of 4000 and 5000 Test match runs. His eight instances of scoring a century in each innings of a first-class game still hold as a world record. In four instances it was a combo including a double ton.

He scored five consecutive international centuries against India in 1982-83, three in Tests and two in ODIs, making him the first batsman in the world cricket to do so.

His second Test match brought Zaheer his highest Test score of 274 and the title of Asian Bradman. This particular innings also saw Zaheer’s selection in the World XI touring party to Australia in the following winter alongside his skipper Intikhab Alam and pacer Asif Masood.

The mercurial history of Pakistan Cricket is littered with magical willow wielders who all pursued the art of batsmanship in their own ways. Yet its Zaheer alongside Majid Khan who are regarded the most aesthetically pleasing one to watch. No disrespect to the Miandad, Hanif, and Younis, but Zaheer’s wristy elegance made him a standout on the batting crease. His two partnerships with fellow stylist Majid Khan against the ferocious West Indian pace attack in the seventies are still etched in minds of those who were fortunate enough to witness them.

In 1977 at the Bourda Oval, Georgetown while rescuing Pakistan from a first innings deficit of 250 plus these two masters added 159 with Zaheer scoring 80, his highest Test score against the West Indies was one. More famous is their second wicket association in the 1979 World Cup semi-final when chasing 290 plus Zaheer 93 and Majid 81 almost saw Pakistan through before a middle-order implosion undid their fantastic work. 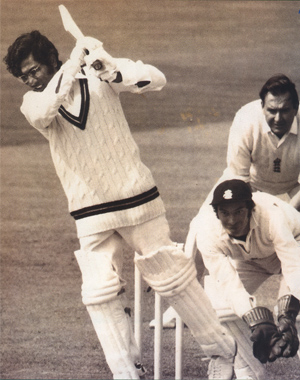 David Foot, a celebrated English writer from the western shires of England, penned Zaheer’s biography in the early eighties appropriately title ZED. Foot is known to write about all that’s great about the lesser-known western counties of England. In addition to Zaheer’s book, Foot has authored biography of another Gloucestershire and England great Wally Hammond among other literary masterpieces.

For the English county Gloucestershire Zaheer remains one of its favorite sons. Gloucestershire is one of the lesser-known forces on the English county circuit. It has never won the County Championship and its limited over tournament triumphs are also numbered. Zaheer represented them for thirteen seasons with distinction scoring 2000 plus runs twice in a county season which subsequently became a rare feat. Zaheer was there when they lifted their first-ever trophy in the shape of 1973 Gillette One Day Cup.

On the flip side Zaheer’s fierce desire to lead his country led to few controversies. He was never happy playing under Javed Miandad when the young Karachiite was imposed upon many seniors by Air Marshall (Rtd) Noor Khan after the disastrous Indian tour of 1979-80. Zaheer was part of the revolt against Javed after the 1981-82 Australian tour and was primed to take over as captain by the rebels when Javed agreed to step down.

However, the same time Javed pushed his own condition to play only under Imran Khan’s captaincy. Imran took over Pakistan’s captaincy as an alleged compromise candidate on the 1982 England tour and rest is history. Zaheer did get the distinction of leading his country in both Test matches and ODIs but that was more on an intermittent basis when Imran was away due to injury. His 14 Test matches at the helm yielded as many as ten draws but included two home series wins against England and New Zealand.