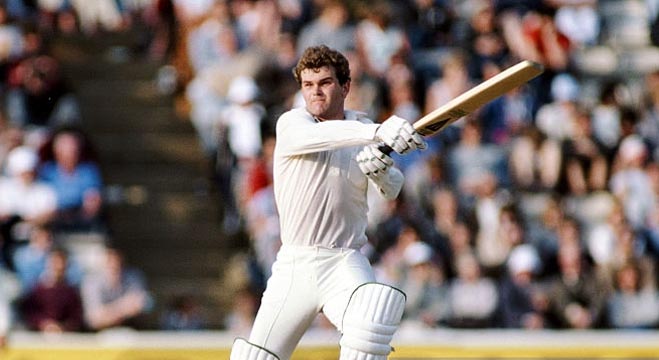 The month of March is known for the arrival of spring in most parts of the world, but in 2016 it brought the sorrowful news about one of the modern cricket greats – Martin Crowe’s death. It is perhaps impossible not to think about his demise in this month if you’re a staunch cricket follower. And I’m no exception.

Karachi, 1990, after paying the obligatory visit to my school I went straight to my favorite ‘hangout’ place – National Stadium Karachi, which was just fifteen minutes’ walking distance away from my house. It was sweltering afternoon; unlike other parts of the country, Karachi in October is usually unsuitable for playing club cricket, let alone an international match.

In that season the Kiwis arrived first, followed by the strong West Indian team. The ‘regular’ captain of Pakistan team – Imran Khan decided to save himself for nice weather and tough opponents: West Indies; he withdrew from the series against New Zealand and Javed Miandad took over the reins.

The two Ws – Wasim and Waqar fancied hunting and they both masterly got Kiwis down one after the other. In the second innings of Karachi Test there was one Kiwi – Martin Crowe who stood like a pillar in the storm. Chasing a target of 237 to avoid innings defeat New Zealand were two down for 23 runs as he walked out to bat against the extravagant reverse swing of Wasim Akram and ‘boomerang’ yorkers of Waqar Younis.

I can never forget, Martin Crowe emerging from the pavilion wearing white helmet, white wrist bands and distinct walk to the crease. Sitting on a concrete stadium seat I watched him in utter fascination; even a legend like Sachin Tendulkar admitted that as a young batsman he tried to imitate Crowe’s walk.

As they say, he was the “last man standing”. Not only did he face 143 balls, but also faced the inevitable – in his first ever Test match as captain, New Zealand lost the match by an innings and 43 runs. He made a gritty 68 not out. But this defeat couldn’t break his resolve. In the second Test, under more bowling conducive conditions at Gaddafi Stadium Lahore he made an unbeaten 108.

Further down memory lane, I remember as a child waking up at 6:00 am to the sound of radio commentary which my father used to relish. At the time, I wasn’t smitten by the cricket bug, but I remember commentator mentioning two names: Martin Crowe and Wasim Akram with enormous verve and enthusiasm. It must have been Dunedin Test in which young Wasim Akram played havoc with the New Zealand batting lineup. He took a ten-for, but as usual Crowe’s outstanding innings of 84 helped the home team reach victory target when they were eight wickets down.

No wonder Wasim Akram once said “I asked Martin, how come you played Waqar and I so well? He (Crowe) said: [I used to wait for your in-swing delivery and play every ball as an in-swing. If you bowled me out-swing, I may get beaten but won’t nick it]. He was a great batsman, in the early ’90s he was the only one who knew how to play reverse swing.”

For years Martin Crowe remained a member of two-man army in which one soldier – Richard Hadlee took care of New Zealand bowling and the other one – Martin Crowe took over the batting responsibility.

Another Martin Crowe’s memory which is embedded in my head is the 1992 World Cup in which under his astute captaincy New Zealand cricket was on the verge of touching the pinnacle of success. They had a smooth sailing and were invincible in the tournament until they met the mercurial Pakistanis in the last round match and in the semi-final.

In the semi-final Crowe made 91 out of team’s total of 262. He and his team absolutely nailed the first half of the match, but then there was an unfortunate twist of fate. He got injured and was incapacitated to take the field. Many pundits still believe that had he captained the side in the second half of the match the result would have been different.

It was nothing short of ironic that the man of steel in a cricket ground was emotionally broken, off the field. To find more about this facet of Crowe’s life I contacted Lorraine Downes (Martin Crowe’s widow) and requested her to shed some light and she graciously obliged. According to her Martin Crowe was a gentle, kind and sensitive soul. He was never afraid to stand up for any injustice. He was a sensitive human being and he carried a lot of hurt and misunderstanding in his heart from his earlier years.

In 2012 he was diagnosed with lymphoma cancer. He connected himself with God which gave him strength to deal with the extremely difficult phase of his life. On 3rd March 2016 he lost the match against cancer and departed this world forever.

In an emotional tribute to her soul-mate Lorraine Downes once wrote “I once asked Marty: How’d you like to be remembered? And he said: For being authentic, loving, and full of prayer.”

Snippets From The Goings On In COVID Stricken Cricket