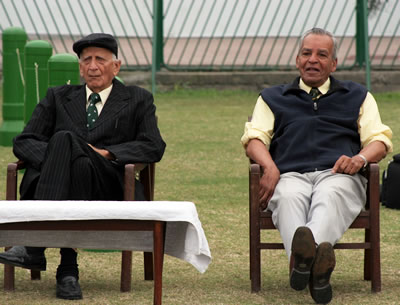 A diehard Pakistan cricket fan, needed all its reserves of resilience, to survive the year 2016. On top of the depressingly bizarre trail of last-day Pakistan batting collapses, in the last six months of Test arena, it had to say goodbye to first Hanif Mohammad and now Imtiaz Ahmed, two of its iconic batting figures of the 1950s and the 1960s. Five days short of his 89th birthday, Imtiaz, the wicket-keeper batsman and one of the sturdiest pillars of the first decade of Pakistan cricket, breathed his last in Lahore, following his four-day battle in the ICU. A sad day for he was the last survivor of the Pakistan side that took the field in its first unofficial ‘Test’ against West Indies in November 1948.

Originally from Bhaati Gate, inside the old city of Lahore, Imtiaz inherited his love of the game from his father, Chaudhry Iftikhar Ahmed, who represented Mamdot CC. The youngster chose to enrol at Ravi Gymkhana in the club scene and also distinguished himself with bat and gloves for Islamia College, Lahore and the Punjab University. With Imtiaz in top gear, it was not unusual for him to outscore his batting partner. One could visualize him thrilling the modern day crowd in the t20 format, with his dazzling array of impulsive stroke play. It is hard to imagine if Pakistan could have establish its credentials at international level and earn the ICC Test status, as early as 1952, without the Imtiaz Ahmed, a dynamite of a player with a box office appeal to draw the crowd to the cricket grounds in thousands.

The cavalier approach he adopted from his teenage years endeared him to the crowds, all over the world. At 16 he was picked for Northern India and made his first-class debut against Delhi in the 1944-45 Ranji Trophy at Minto Park, Lahore, a ground, hardly 10 minutes walk away from his house. Kicking off with his maiden first-class hundred, which came against Southern Punjab, Imtiaz produced a number of delightful innings at Lawrence Gardens, renamed Bagh-i-Jinnah, following the partition of the sub-continent. The merit of his superb unbeaten 138 for North Zone against the 1945-46 touring Australian Services, has not been, discussed often enough. It was his 268-run stand for the 7th wicket with Abdul Hafeez (173) that lifted the score from 106-6 to 410 all out and got Imtiaz into the spotlight.

A crowd puller with a bat, particularly more so for his range of leg-side strokes, Imtiaz stood up to the challenges, posed by pace and spin. Invariably it was pull, hook and sweep that earned him the bulk of his scoring and it was these three strokes that dominated his record-breaking 300not out against West Indies spinner Sonny Ramadhin, for Prime Minister’s XI against Commonwealth at Bombay. An unforgettable knock, for both the players and the spectators.

In the first unofficial ‘Test’, Imtiaz showed no mercy to the West Indies bowling, by scoring 76 and 131, as an opening partner of Nazar Mohammad. Both Mian Mohammad Saeed and A.H. Kardar, the country’s first two captains, were to benefit from the fact that Imtiaz had a mind-set and the confidence to come in at any given batting position. Against New Zealand in the 1955-56 series, with Pakistan in all sorts of bother at 111 for 6, Imtiaz, walked in @ number 8, to produce, a most delightful innings of 209, which for almost quarter of a century, remained the highest score for a wicket-keeper in a Test. On the 1957-58 tour of the West Indies, Imtiaz returned to open the batting and it was his dashing 91 that laid the platform for Pakistan’s historic rearguard action to earn the most unlikely draw at Bridgetown, with his partner, Hanif Mohammad reaching 337.

As a first-choice wicket-keeper in the period 1948-52, Imtiaz was quite efficient behind the stumps. On Pakistan’s inaugural Test series in India in 1952-53, he played the first three Test as a batsman before the management decided to take the gloves from Hanif Mohammad. For the rest of the career, Imtiaz had no challenger, to his role in the Pakistan team, as first-choice wicket-keeper. In the country’s historic 24-run win at The Oval in 1954, Imtiaz picked up 7 catches off Fazal Mahmood, a medium-fast bowler he had kept wickets to for the last decade in various sides and with whom, he would enjoy, a lifelong friendship.

In 1959 Imtiaz became the third Pakistan Test captain. In the domestic cricket Imtiaz represented Combined Services, North Zone and Pakistan Air Force in both Quaid-i-Azam Trophy and Ayub Trophy. Remarkably, for the best part of his 28-year first-class career, he was three-in-one player as he captained, opened the batting and also kept wickets. Once his playing days were behind him, Imtiaz’s experience and deep insight, came to good use, in a number of roles, that he was offered, by the Pakistan cricket Board. He managed, coached and selected, both junior and senior Pakistan sides and in his later years also assisted the national women team. Imtiaz will be badly missed for his gentle demeanour and the fact that he was always approachable and did not allow the success to get to his head.