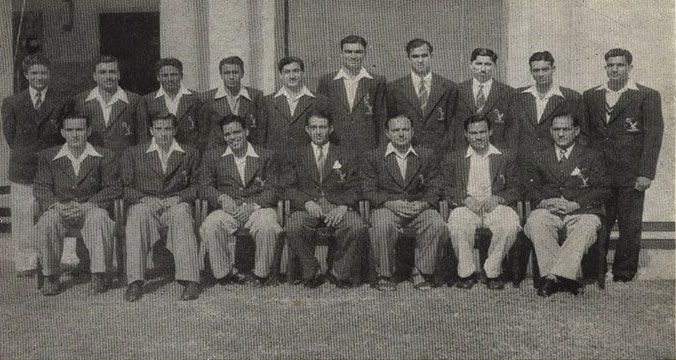 When Waqar Hassan passed away on February 10, 2020, he was the last member of Pakistan cricket team’s first eleven, that represented Pakistan in its inaugural test played against India at Feroz Shah Kotla ground in Delhi on October 16, 1952.

The team’s batting order was:

The first to die from the first test eleven was Amir Elahi in 1980 and Waqar Hassan was the last to die in 2020.

After arriving in Delhi to play its inaugural test match, October 16,17,18 1952, Pakistan cricket team spent its first two days by attending a dinner by the Pakistan High Commissioner in India and then another grand dinner at the Roshanara Club.

Before the start of the play on the first day of the test match, Kardar inspected the pitch and found it topless. Its surface was soggy mud. The reason was that India had a fine spin attack and therefore such wickets were prepared to favour them.

India’s captain Lala Amarnath won the toss and gesticulated jubilantly to the pavilion, indicating to his batsmen to pad up to bat first. Before Pakistan took the field, both teams were presented to the President of India Dr. Rajendra Prashad.

Khan Muhammed and Maqsood Ahmed opened the attack for Pakistan. Within an hour Pakistan had dismissed both the openers, first, Pankaj Roy for 7 and then Vinoo Mankad for 11 to make a sensational start.

Both were clean bowled by Khan Muhammed on a lifeless wicket where Khan the quickest bowler of the team was bowling at half his normal pace.

Khan Muhammed had willingly approved his selection but there were some doubts about his fitness and one could see that he was not quite fit and was not bowling at his full speed yet he bowled some clever overs. Incidentally Khan Muhammed broke down in the match and never bowled again on the tour.

Fazal Mahmood was brought on the other end in place of Maqsood but since Khan had bowled a long spell for an hour he was given rest and Fazal was switched on his end while Amir Elahi came on to bowl on the other end.

Vijay Manjrekar was dropped in the slips by Nazar off Fazal but was soon caught by him off Amir Elahi. Fazal took toll of the pitch with his foot marks after delivery. He bowled directly over the stumps and his marks for two paces were along the pitch, just on the leg stump from the other end.

Perhaps it was owing to those marks Vinoo Mankad made the ball jump occasionally. Fazal was warned by the umpires in all the Test matches and other matches played on turf wickets, but could not mend his habit. Fazal earned his first Test wicket when Amarnath gave an easy catch at short leg to Khan Muhammed and India were 76 for 4 at lunch.

Incidentally in first-class cricket too Amarnath had been Fazal’s first wicket. At lunch both the teams met Prime Minister Pandit Jawahar Lal Nehru who had come to welcome Pakistan team to Delhi but left soon after. However his daughter Mrs. Indira Gandhi stayed back and had lunch with Pakistan team.

At the close of play India was 210 for 7 mainly because of Vijay Hazare who made 76. Wicket keeping of Hanif Mohammed was not of Test standard. He twice dropped Gul Mahomed and missed a stumping chance of Ghulam Ahmed both off Kardar’s bowling. That night Pakistan team was feted at Rashtarapati Bhawan by the President of India.

After India was all out for 372, Pakistan opened their innings with Nazar Muhammed and Hanif Mohammed who gave a very good start and stayed together at 64 for no loss but then Nazar was run out for 27 without a supporting call from Hanif. Israr Ali for 1 and Imtiaz Ahmed lbw first ball by Mankad for a duck followed each other quickly to the pavilion.

Israr Ali told me a few months before he died that, “Although I was a bowler mainly but Kardar sent me at No.3 as a batsman and never let me bowl in the match. Kardar did not know me as a bowler. I had very little experience of playing on the turf wickets and I was nonplussed by Mankad and could not judge his bowling and was bowled by him for 1 in the first innings and again lbw for 9 by him in the second innings.”

Mankad got 8 for 52 to end Pakistan’s first innings at 150. Only Hanif 51 and Fazal 21 batted with confidence against Mankad. Hanif batted for exactly four hours and hit 6 fours. He did not lift a single ball from the ground.

Pakistan was put on follow-on in the second innings with a deficit of 222 runs. Just with 48 runs on the board Pakistan had lost Hanif 1, Nazar 7, Israr 9 and Maqsood 5. Hanif was out to an inswinger from Amarnath. Kardar always had thought that Hanif was weak to play inswingers.

Kardar and Imtiaz batted well to score 43 not out and 41 respectively. Fazal once again batted well in the second innings to score 27, but by tea time on the third day Pakistan had ended its second innings for 152 runs which resulted in an innings and 70 runs defeat. It was here Fazal Mahmood had a dialogue with Indira Gandhi in response to her earlier prediction that Pakistan will lose the match. Predicting Pakistan’s win in the next Test, Fazal invited Indira Gandhi by saying “Come to Lucknow and see India lose the 2nd Test.”

Mankad took 13 for 131 in the match to prove he was the greatest left arm spinner of the era. He had bowled exceedingly well on a wicket which was laid out for him. Later on in the Bombay Test he created the record for a Test Double in the fastest time.

Khan Muhammed took 2 for 52, Fazal 2 for 92 and Kardar 2 for 51 in the first official Test match. Hanif who scored 51 runs became the first to score half a century for Pakistan in Test cricket. Waqar Hasan and Mahmood Hussain were still the students at Government College Lahore when they were touring India. Whereas the rest of the team members were all from Islamia College Lahore.

The maternal grandparents of Waqar Hasan had been killed during the partition in August 1947 when their house was set on fire in Amritsar and they were burnt to death. When Peter Oborne asked Waqar Hasan what he felt on going back to Amritsar after that great tragedy?

Waqar Hasan replied that he just felt normal going back to the city. The wounds of partition were still raw but were gradually healing. The tour was meant to normalise the relations between the two countries and the Pakistan team was there as an ambassador of peace. It was an unpleasant tour for Imtiaz Ahmed as he had become a victim of bad decisions of the umpires.

When leaving Lahore for Amritsar via Wagah border he had boastfully remarked that the Indian bowlers will not be able to get him out. So they found another way to get him out through the lbw decisions of the umpires.

According to Imtiaz, the umpires were looking for the smallest pretext to give him out. So any ball that even came close to his pads would warrant an lbw decision which really rattled him and he became over cautious. Fazal Mahmood told me that some of the Indian actresses of the time were deployed to lure Pakistan’s star players to distract them from cricket, particularly the fast bowlers. Actress Nadira who had starred in the much acclaimed film of that year Aan was one of them who tried in vain to lure him.

None of them are there anymore. All out now. Only Wazir Mohammed remains the lone survivour of the touring team. It is time to remember those eleven stalwarts who first donned the cream coloured kits with green caps, the colours of Pakistan, for honour. They had appeared for the first time in Test cricket for Pakistan and made their country proud of them. May the souls of these heroes rest in peace.

I am down but not out Danish Kaneria