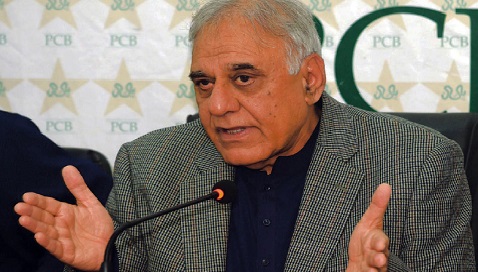 As winds of change are blowing in the country after the general election, panic has gripped the officials of Pakistan Cricket Board.

Haroon Rasheed, the most sycophant high official of the board, has been transferred from Lahore to Karachi as director south at the high performance centre. He replaces Iqbal Qasim, who resigned from the post last month.

Haroon Rasheed has been associated with PCB for a long time. He has been chairman national selection committee, director game development, manager and coach. Despite repeated failures in all these roles, he has managed to cling to the board in one capacity or other. He is ousted whenever the board faces criticism but comes back as soon as the dust settles down.

And this time he has been transferred to Karachi where a vacant post was awaiting him. Nobody knows for how long Pakistan will suffer for giving him 23 Tests and 12 ODI caps in 1977-83.

Why PCB chairman Najam Sethi transferred Haroon Rasheed would be learnt in the coming days when PTI takes charge. It seems that right now they are trying to accommodate someone at PCB headquarters in Lahore

It is surprising that Haroon Rasheed says he was fed up with politics in PCB headquarters and decided to come to Karachi. Great reason indeed! He was appointed first time in PCB in 2003 and now he is fed up with the politics.

The game of musical chair has been going on in PCB for long. When Haroon Rasheed left the job of director operations in Lahore and came to Karachi, one Usman Wahla was tipped to take the seat. His CV states that he is a commentator of golf. Well done PCB! You are doing a fine job!

A number of investigations are being conducted by NAB and FIA but the PCB high officials always escape using their good connections. But enough is enough!

Now the country is to be led by Imran Khan, who has come to power after 22 years hard struggle. He has promised CHANGE. There is no need to tell him what the importance of cricket is in this country. Being a former captain he well knows all the successful administrations of cricket-playing countries.

The days of the corrupt and the fake degree holders are numbered. They have caused enough damage. The game cannot bear them any longer.

Happy for my six-for, says Yasir

A Victory of Faith