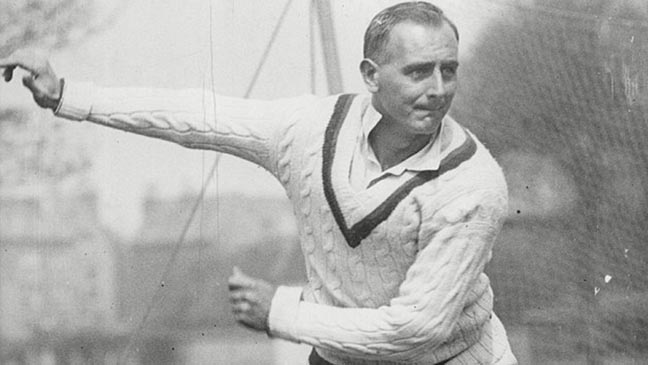 Hedley Verity was killed in Italy in 1943 during the fierce struggle between the Allies and the Nazis for control of Italy. He was an army captain in the Green Howards and just 38 years old. Before leaving for the war he told his father that it was the end of his cricket career.

Not many players were fortunate to enough, like Bradman, Hutton, and Hammond, to play after the war as well as before it. Some, like Verity and Farnes, were killed during it. Now that the pub bearing his name, The Hedley Verity in Leeds, is owned by the EU-despising Wetherspoon, I wonder what Hedley would have thought about it, having given his life as a British soldier for the freedom of Europe from tyranny.

His career with Yorkshire and England was quite short. He played his first game for Yorkshire in 1930 and his last in 1939, when he took 7 for 9 against Sussex. His last Test was the famous Oval Test in 1938 when Hutton scored 364 and Australia were humiliated, facing one of the biggest defeats ever after England scored 903-6 declared

His career with Yorkshire and England was quite short. He played his first game for Yorkshire in 1930 and his last in 1939, when he took 7 for 9 against Sussex. His last Test was the famous Oval Test in 1938 when Hutton scored 364 and Australia were humiliated, facing one of the biggest defeats ever after England scored 903-6 declared.

Verity had a quiet match, left 8 not out in the tsunami of runs, and taking 2-15 in Australia’s second inning as they were blown away by England’s Farnes and Bowes. Bowes was especially devastated to learn of Verity’s death; how many teams in the 1930s had been troubled by these two Yorkshire bowlers as the county proceeded to seven championship victories in the 1930s?

Verity had taken over from Wilfred Rhodes as Yorkshire’s main spinner and was already 25 when he played his first game. Rhodes had laconically anointed his successor with a grudging “he’ll do”, which was about as close to praise as anybody got in that hard school. In 1931 he took all 10 for 32 at Leeds against Warwickshire, a team including Wyatt and Kilner.

But his most astonishing feat was taking 10 for 10 (yes, that was not a misprint!) against Nottinghamshire in 1932. Notts, apart from Larwood and Voce, had George Gunn and EW Carr; in their second innings Yorkshire knocked off 139 for no wicket, so the pitch cannot have been a real sticky-dog.  Verity was simply unplayable, even though he half way through his 19-over spell (16 maidens) before he took a wicket. The others followed in an avalanche with a hat trick and then four in one over.

I am sure that Verity would have named Lord’s 1934 as his greatest match – indeed it is called Verity’s match. He took 15 wickets, including 14 on one day, as England exploited a rain-affected pitch to advantage. The teams had ground each other to parity after three days, England scoring 440 thanks to hundreds by Leyland and Ames, and Australia having scored 203 for 2 by early on the fourth morning, the weather having turned wet overnight.

Verity then ploughed through their talented batting line-up, accounting first for Bradman and McCabe, then five of the remaining six, finishing with 7 for 61 in 36 overs as Australia were bowled out for 284. In the follow-on Australia fared much worse, out for 108 to lose by an innings, Verity taking 8-43, including Bradman and McCabe for the second time in the match.

Overall indeed Verity dismissed Bradman 7 times in Tests, more than any other bowler. The ultimate accolade from Bradman, who admired Verity as much as a man as a bowler, was that Verity was the only bowler he never felt comfortable against (even, I think, when he was 200 not out!)

As a former left-arm spinner when asked whom I would have liked to see bowl, the answer is always Verity, with Rhodes a close second. What was it like to face him?

Imagine a tall elegant figure, loping easily in around the wicket, a double whirl of the left arm, and the ball spinning towards you, almost always landing exactly where Verity wanted it, as he put it, “as short as I can with the batsman still playing forward”, which is the very definition of a good length for a spin bowler.

Although having large hands and long fingers, he was in truth not a huge spinner of the ball, which is probably due to his Yorkshire schooling in the art of no-frills spin bowling to line and length at all times. Spinners were to keep the runs down and take wickets when the pitch was damp. His record shows that Verity did not take wickets only when conditions favoured him.

He was effective under all conditions but lethal on those 1930s unprotected pitches. My Dad used to praise Verity’s bowling as perfection itself. He described how Verity would bowl with three or four men close in on the off side, in front as well as behind square, with Arthur Mitchell at gully virtually snatching the ball off the face of the bat as the batsman pushed forward or tried to fend off a ball stopping in the pitch. You can see examples of this type of bowling still on YouTube video of the 1934 Test.

Verity spun the ball as much as he needed to. Accuracy and subtle variation were his main assets. He achieved a lot of caught and bowled and lbw decisions (for a spinner under the lbw laws of the time) – an indication that he was deceptive rather than bowling a lot of rippers and snorters.

Verity displayed all the human virtues. His courage in battle was truly outstanding. He was never heard to utter a word of complaint or criticism even under the most trying conditions. Humility, patience and application were his virtues.

Douglas Jardine (an unlikely close friend for a Yorkshireman, you might think, who gave his name to Verity’s son) as well as Bradman himself, had the highest praise for Verity as man. There is a story that when Jardine was rescued from a tight spot in France during the war, he was told that all would be well because he would be saved by a ship named after his friend and favourite bowler: HMS Verity!

In an age of 10 or 15 Tests a year, and given a longer career without war intervening, one wonders what Verity might have achieved even beyond this already remarkable career. It is impossible to say whether he was the greatest, but he must be surely one of the very best spinners of any kind who ever graced a cricket ground. His grave is at Caserta, North of Naples. One day I will go and lay a wreath there and salute the Yorkshireman whose name, by the way, means “truth”.