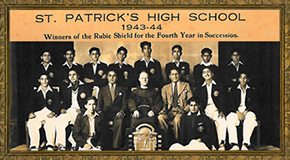 About two years ago some of the leading newspapers carried an article on The Rubie Shield and one of these quoted the Rubie Shield has been played in Calcutta.  Since then I have tried to authenticate this school of thought without any success. What I have come to believe is there may have been some confusion regarding the origin of the Rubie Shield as played between a variety of schools in Karachi and Sind.

Prior to this confusion one was lead to believe that the Rubie Shield was a tournament being played mainly in the city of Karachi. The major adversaries at the time where Sind Madressah, Saint Patrick’s High School, N.J.V. High School, B.V.S. High School, Model High School and Church Mission High School.

C.B. Rubie was a gentleman cricketer who studied in England at Lancing College in Sussex.  He then came across the Indian sub-continent where his first work on the constitution of Indian cricket was done in Ceylon (Sri Lanka).  The first major public exposure given to C.B. Rubie was in a charity match played around 1919. The Sind cricketers were quick to recognise his talent and allowed C.B. Rubie full reign.

Around this period cricket took India by storm when a touring team lead by A.E.R. Gilligan established credentials of their own.  This was followed by Jardine’s team of 1933-34.  Both Gilligan and Jardine were so enamoured by the work C.B. Rubie had done that they decided to put their hands entirely under the authority of C.B. Rubie.

The two photograph’s, one taken in 1942 and the other taken in 1943-44 show some of the most important names of school cricket and include Jack Britto, Father Modestine, Hockey wizard Pat Mendes, D.J Govind, L. Fernandes, E. D’Mello, J. Anand, R. Nazareth.

The readers may find it irritable and irksome to find Goan names scattered all over but the truth of the matter is that the Goans did much to improve the performance of cricket in what is now essentially Pakistan.  Even as we go to the press we learn of how ill Hanif Mohammed is.  Hanif was perhaps the most prolific of all the Rubie Shield players. The only challenge that lit up Karachi cricket came from Ikram Elahi, Khalid Wazir.  We hope to continue the rest of the history of the Rubie Shield in next article .

“Old fellows’ Club”, the other name of PCB