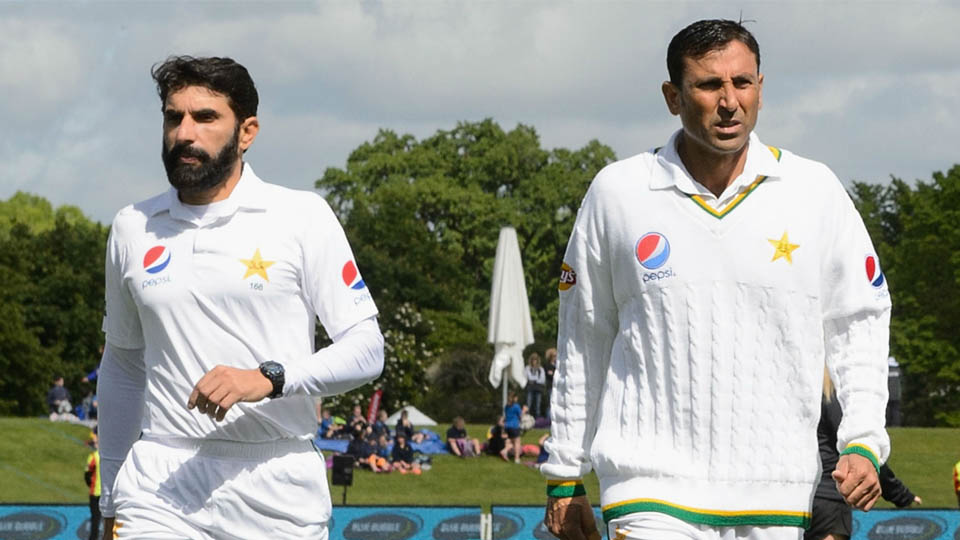 Today Pakistan Test Cricket stands on the brink of creating history . If they win the third and final Test beginning this evening (Pakistan Time) in the tiny island Dominica’s capital Rouseau’s Windsor Park, it will be the first time in 60 years that they would have defeated the West Indies in the Caribbean.

Pakistan does have the record in Tests of winning at least one Test in their inaugural series against every Test playing country. They won against India in 1952, England in 1954, New Zealand 1955, Australia 1956, West Indies in 1957.

They did not play against South Africa because of the latter’s apartheid policy. Sri Lanka, Zimbabwe and Sri Lanka attained Test status much later. Kardar was the captain between 1952 and 1957; Misbah fully deserves a record as it would be a sweet icing on the cake of his successes as captain of Pakistan.

It will be a perfect farewell gift for the best captain Pakistan has ever had (so far he has captained in 55 Tests; winning 25, losing 19 and drawing 11- a most enviable record) and also for perhaps the best wielder of the willow (10000+ runs; 34 centuries and 33 half centuries and 138 catches) that the country has produced – Younis Khan.

It will be the swan song for both these greats and they will be leaving a vacuum in the Pakistan line-up which will be very difficult to fill. Yunus and Misbah we the fans of Pakistan cricket are grateful to you for the immense pleasure, joy and ecstasy – and at times a hiccup or two here and there!! – which you have provided over the years. You have done Pakistan proud in the field of cricket.

Please enjoy your well earned retirements; your families and friends need you. Do not even think of going into activities (I will not go into the details or give examples) which will only help in sullying and muddying your squeaky clean and perfect gentlemanly personalities. Please try and avoid getting into any controversies which many will try and drag you into by provocations.

Let people remember you for your cool, calm, collected temperament, your unflappable and dignified demeanour, your astute leadership incomparable batting and alert, agile and safe fielding. May God bless you and your families.

A victory in the Roseau Test will be another feather in the hats of Misbah, Yunus as well as the PCB Chairman Shahryar Khan.

It is also good news that Shahryar will stay on at the helm of affairs of the PCB at least until August August 2017. Did I hear people say that he will go in April. At one time Najam Sethi the heir apparent appeared to be the automatic successor but that does not seem to be happening

The West Indies as we all know is a conglomerate of 10 independent countries and 5 dependencies. Dominica is one of the smallest countries in the world both in terms of area and population.

Dominica is a beautiful and serene island. I have not been there but have been to other picturesque spots in the West Indies like St. Lucia, St Vincent and the Grenadines, Nevis and St Kitts and Antigua.

A cursory glance at the four tests played so far at Rouseau sends mixed signals for the experts and analysts. Two centuries have been struck by the evergreen Shivnarine Chanderpaul; and one each for the West Indies by Kirk Edwards,and Chris Gayle; and a century each by Michael Clarke, Adam Voges and Mathew Wade.

On the bowling side bot pace and spin have thrived – pace bowlers like Ishant Sharma, Fidel Edwards, Mitchell Johnson, Joshua Hazlewood and Mithell Starc have troubled the opposition batsmen; while off spinner Shane Shillingford with 20 wickets in two tests and Michael Clarke, Nathan Lyon, Harbhajan Singh and Devendra Bishoo have all caused problems for the batsmen at the crease.

Paucity of time and space do not allow for a meaningful analysis of the Pakistan Test squad. Suffice it to say that it defeats logic. Only a coterie of 4 pace bowlers on a tour of the West Indies and 3 spinners including two rookies. And NO all rounders.

Difficult to understand and follow the (il)logic of the selectors. Or does Mickey Arthur calls the shots and decides the ultimate gang. For the crucial final Test Pakistan need a change in their opening and upper order.

Shan Masood deserves a return; because of their class I would retain both Asad Shafiq and Babar Azam. Too risky to drop Amir in spite of his alleged reported disinterest in Test Cricket. Let Wahab Riaz continue his rest and bring in Hassan Ali to replace Shadab Khan.

Hopefully the entire machinery will function like a well oiled unit in all segments particularly fielding. We wish and pray that Pakistan creates history by winning the Windsor Test and the series 2-1. It will be a befitting farewell gift for the two stalwarts of Pakistan cricket Misbah ul Haq and Younis Khan and another feather in the hat of the PCB Chairman Shahryar Khan.

It is also good news that Shahryar will stay on at the helm of affairs of the PCB at least until August August 2017. Did I hear people say that he will go in April. At one time Najam Sethi the heir apparent appeared to be the automatic successor but that does not seem to be happening.

Najam will be a suitable Chairman PCB but then what happens to his “baby” the Pakistan Super league which is set for its third term and an addition in the number of franchises. After PSL we are also hearing of Afghanistan going for a League. And why not?

The plot in the so called match fixing/spot fixing is thickening. The PSL thought that all those they “accused” would be simpletons like Mohammad Irfan and would bow down to the wishes of the Manager of the Anti Corruption Unit. It was believed that the PSL had a watertight case with solid evidence.

In fact with Mohammad Nawaz now dragged in no one is clear whether the respected tribunal is seized of the entire matter as a whole or are they restricted to ONLY the PSL 2017? The “accused” players seem to have a stron case and the matter can drag on for some time and may go all the way to the highest court of law.

As expected and predicted India in spite of playing hard to get , capitulated and will be taking part in the Champions Trophy. Boycotting it would have been had dire consequences and penalties which neither the BCCI nor ICC could afford. Also as expected the BCCI rejected outright the legal notice sent by the PCB.

It should first be determined and agreed as to the nature of the document the two Boards are alleged to have signed. Was it an MOU or a Contract. There is quite a significant difference between the two.

For the moment let us put all this on the back burner and enjoy the keen tussle at the Windsor Park. It should keep the fans spell bound.

Age is just a number for General Misbah