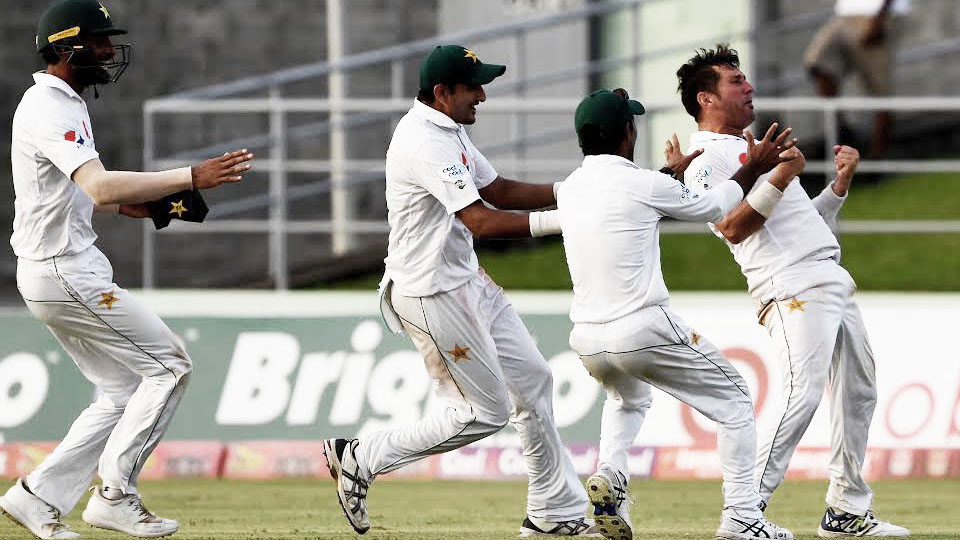 Light was fading, drizzle had started. Fielders were anxious, captain was frustrated. Misbah-ul-Haq was running fingers on his long beard.

Batsmen were adamant, bowlers relentless. Fans in the stands were enjoying local team’s resistance, here in Pakistan were yawning.

Will that one wicket come or Pakistan had to digest a frustrating draw. The dejection of 1988, when umpires deprived Imran Khan’s men of a deserved series winning Test at Bridgetown with some dubious decisions.

The demons of “extraordinary” umpiring incompetence by Doug Cowie and Billy Doctrove that snatched a win from Moin Khan-led Pakistan were coming to minds.

But Roston Chase once again became a thorn in Pakistan’s way. Obdurate and unemotional, Chase is getting used to of thwarting opponents. He is maturing as “Crisis Man”, a tag he loves

Will history be made or Pakistan had leave without a series win for the eighth time? Will the two greats – Misbah-ul-Haq and Younis – have a winning farewell?

Many had hoped that the fifth and final day will be short. On a weary fifth day pitch you expect your ace spinner to run through.

But Roston Chase once again became a thorn in Pakistan’s way. Obdurate and unemotional, Chase is getting used to of thwarting opponents. He is maturing as “Crisis Man”, a tag he loves.

Just last year he snatched a draw from the jaws of defeat, that too from a spin loaded India on a fifth day pitch during his resolute 127 not out at Jamaica.

Pakistan ran through the middle order with relative ease. Yasir was looking good.   Jason Holder, who at times looks West Indies’s non-playing captain as his contributions are scarce and far in between, became an able accomplice of Chase in raising hopes of a great escape.

Together they added 58 for the seventh wicket but more importantly consumed 18.4 overs.  Pakistan was hoping they wrap up the innings before they require the second new-ball. It would be too late, may be the light and hopes fade before that.

Before tea Misbah tried Azhar Ali and Asad Shafiq. That showed his desperation. In good times he would never go to occasional bowlers. But these are desperate times and you need desperate measures. But tea was taken with both Chase and Holder firm.

Misbah and Younis walk to the ground in company, for the last time ever on an international cricket field. Misbah threw the ball to Hasan Ali who by now had one wicket and oodles of energy. His run-up is very lively, his eyes searching for a prey and his body language aggressive.

Chase drove the third ball back to Hasan in air, but the bowler in his follow-through failed to hold it. It raised gloom on the field, a golden chance is wasted. Chase’s fall would have ended West Indies chase of a draw.

Fifth ball was again negotiated with a dead bat. Seven deliveries left in the match. History will not change, was a common opinion. Yasir looked at Younis, asking what to do? The wily fox signalled a slightly wide fullish delivery. Yasir obeyed. Perhaps nature also saw the signal. Bang, Gabriel’s patience ran out as he slogs only to inside edge it onto his off-stumps

But Hasan finally got one wicket, not of Chase but that of Holder. His vicious full toss reversed back and Holder could not hold it as he was caught right in front. No need for a review.

Devendra Bishoo is no mug with the bat. He too hung on for another 14.3 overs.  Chase had entered 90s, Pakistan in more depression. Misbah brought Mohammad Abbas and in his third over of the spell, Abbas bounced at Bishoo who fended it to silly point for Shan Masood to take a catch. Bishoo had left a similar bouncer a ball before.

Alzari Jospeh comes. Pakistan had another chance spurned and it was again Hasan who failed to hang onto a return catch, a sharp and difficult one.

Final hour starts as umpire Richard Illingworth points towards his watch. 15 overs to go. A win for Pakistan or a draw, two possible results left. 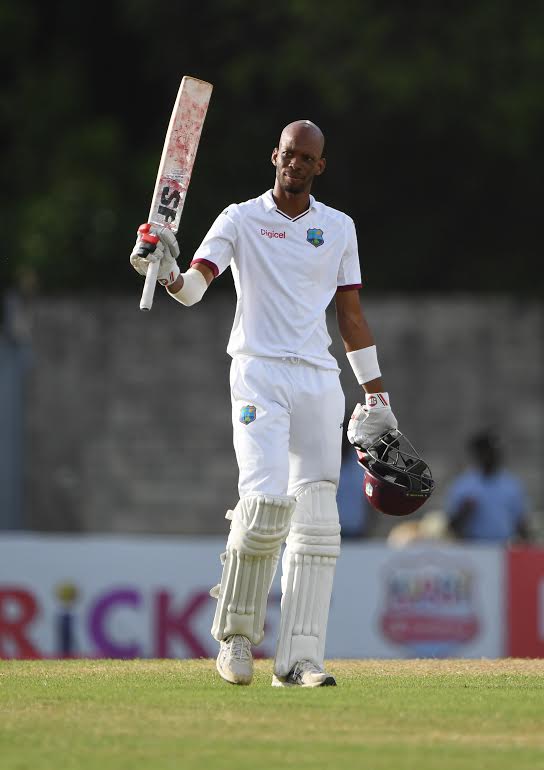 Two overs later bad luck struck again. Abbas had Chase caught in the slip as celebrations sparked. But, oh no!  That was short lived. Abbas had overstepped. Curse, what luck?  Pakistanis were lamenting, Chase jolted.

Soon he gathered his breath and drove Hasan for a boundary to reach hundred, well deserved and hard earned, second of the series. As promised to his brother in the stand, he made a cross X with his hands. Job still not done for him.

Joseph’s hour-long stay came to an end. Hasan produced one in the channel and caught an edge off an otherwise dead bat for Sarfraz to grab a catch.

One wicket left, but 7.4 overs to go. A combination of desperation and hope prevailed.  “How long a tail-ender will survive,” must have been a question in Misbah’s mind? He blinked his eyes as if visualizing how to celebrate a last time.

Gabriel, known as an impatient bloke amongst his friends, was showing remarkable patience. He blocked, prodded and defied bowlers, his bat as dead as a dodo.

13 overs had been consumed. A slight drizzle started, as if warning Misbah that time is running out. But it was nature that had come to the farewell party.

Yasir came on to bowl the second last over and more importantly he had Gabriel to bowl at. Number eleven negotiated three balls without any problem. Off the fourth ball he was given out, caught at silly point but within a second the batsman reviewed.

Richard Kettleborough did find enough evidence of ball hitting the pad and not the bat. Decision overturned. For the first time Misbah lost his cool. He murmured some words of exasperation, may be cursing his luck or a expletive to umpire, maybe in Punjabi.

Fifth ball was again negotiated with a dead bat. Seven deliveries left in the match. History will not change, was a common opinion. Yasir looked at Younis, asking what to do? The wily fox signalled a slightly wide fullish delivery. Yasir obeyed. Perhaps nature also saw the signal. Bang, Gabriel’s patience ran out as he slogs only to inside edge it onto his off-stumps.

It was Younis who took the stump as souvenir to spark jubilation. Yasir ran and ran, imitating a goal-scoring Lionel Messi like celebration. The Windsor park field was abuzz. Pakistan team had created history. Greats were accorded a winning farewell and millions of fans back home were relieved and retired to beds.

Finally the Caribbean Frontier was conquered!