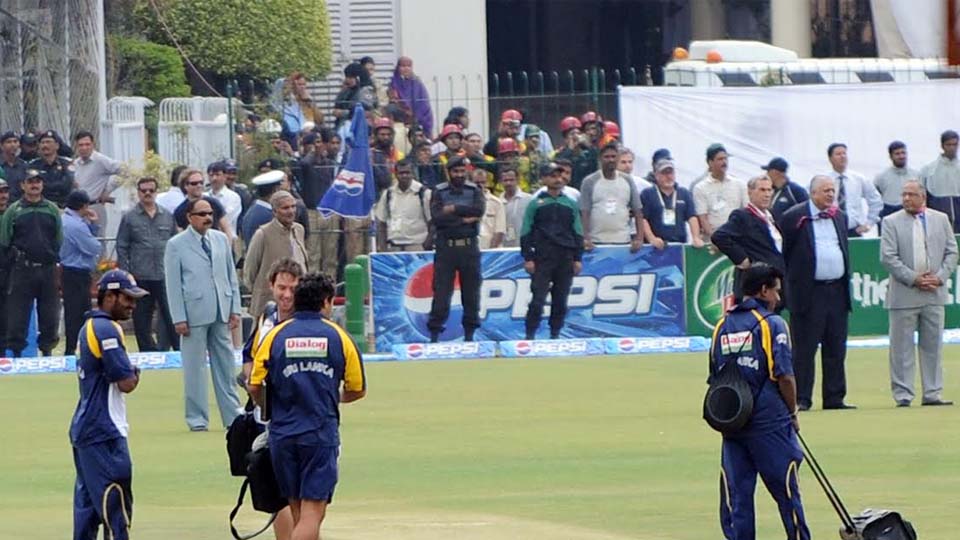 It was a fine sunny morning of 3rdMarch 2009. I was on my way to my office in the Gaddafi Stadium from my Walton Road residence in the Lahore Cantt. As my car crossed the Cavalry ground overhead bridge and turned right from the Firdous Market traffic signal towards Hussain Chowk I received a call on my cell phone from Ehtesham, an office boy of the Pakistan Cricket Board (PCB).

“Sir, Sri Lankan team has been attacked”, he informed me. “What”, I asked in complete disbelief? “Sir, the bus of the Sri Lankan team is stationed inside the compound of the Gaddafi Stadium and you must reach immediately”, he said. I instantly informed Ijaz Butt, then Chairman of the PCB and Salim Altaf, the Chief Operating Officer of the Board.

Only days before the attack Sri Lankan sports minister Gamini Lokuge was in Karachi to witness the first Test. Being his liaison officer I accompanied him for shopping in Saddar Bazar and Tariq Road without any security.

Before leaving for Colombo Lokuge addressed a press conference at the National Stadium and rejected security fears. “We are playing cricket here safely. If there had been any security problem then I wouldn’t be visiting here. I came here so that a positive message could be sent to the world that Sri Lankan team is visiting Pakistan with its sports minister,” Sri Lankan minister had said.

“The threat of an attack on the Sri Lankan team was quite serious. The PCB had been warned of the potential threat by the security agencies which had also requested the Board officials to closely monitor the security arrangements”, I covered the short distance from Hussain Chowk to the Liberty round-about talking to myself.

Near the Liberty round about some traffic policemen stopped my car and cautioned me not to move ahead.

I told them that I am an employee of the PCB and also showed my official card but they advised me to take the Ferozepur Road route to reach the Gaddafi Stadium as the site of the incident was not clear yet.

I left the car there and asked Javed, the driver, to follow the Ferozepur Road route and started walking towards the Gaddafi Stadium.

Some forty yards area of the round-about had turned into a horrific long journey amid gruesome scenes of bloodstained bodies around. Two bodies of policemen were lying close to the footpath on my left near the United Christian Hospital.

I saw two more bodies near the divider and another besides the edge of the round-about on my right. As I continued my horrifying walk I saw another bloodstained body of a policeman fallen on the steering of the van near the Plaza on my left.

I reached the Gaddafi Stadium amid these frightening scenes which I had never experienced before.

The PCB headquarter was in a terrible state of shock. Bus was stationed in the parking lot of the Stadium.

I went straight to the Dressing Room and met with the Manager and players of the Sri Lankan team and found them in a state of profound shock. Kumar Sangakkara and Mahela Jayawardene were, however, composed and taking care of the injured players.

Murlidharan was genuinely emotional and narrating the incident to everyone around. I asked Sangakkara the contact numbers of players’ families in Sri Lanka so they could talk to their relatives. He informed me that some players had already made contacts at home.

In the meanwhile, both Ijaz Butt and Salim Altaf also arrived the stadium. Later, late Salman Taseer, then Governor of Punjab, also arrived at the stadium along with his staff and an over smart photographer whom I strictly forbade from taking snaps of the injured players.

Consultation started for the expeditious evacuation of the visiting team and officials. Salim Altaf and I approached the manager of the Sri Lankan team. We agreed to draft a joint statement which was signed by Salim and Brendon and issued to the press forthwith.

After an hour a helicopter landed inside the ground and flew to a nearby airbase with players, Ijaz Butt and Aamir Sohail on board. 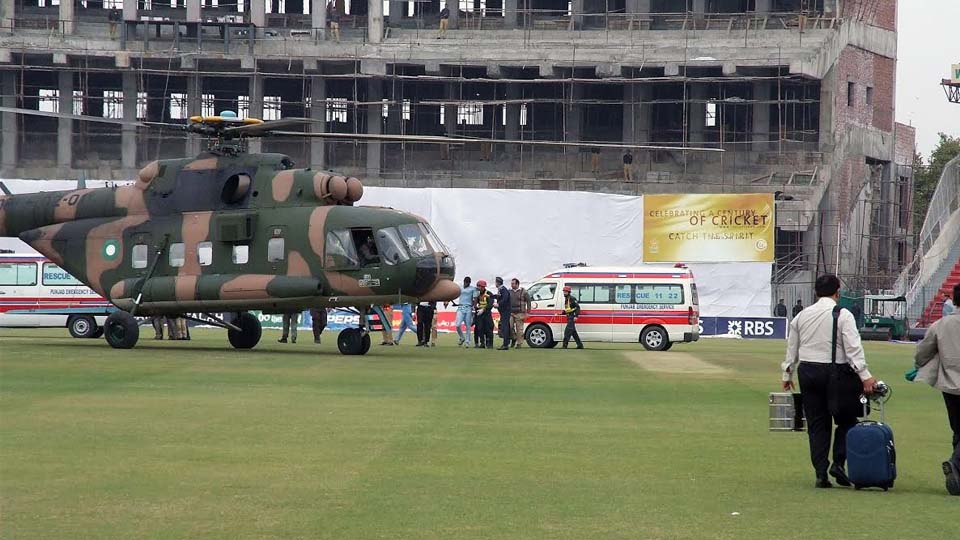 Salim Altaf and I drove to the PAF Mess where the players were sitting in a lounge in company of the Air Force officers. They were composed. After an early lunch they went to their rooms for some rest.

The PCB logistic department was directed to explore options to send the visitors back home. It took time. Brendon was anxious to know the progress. He approached me frequently to know the development.

It took a couple of hours to finalize the availability of seats and finally the logistic department informed me that the players were booked on Lahore-Dubai-Colombo route.

“Only days before the attack Sri Lankan sports minister Gamini Lokuge was in Karachi to witness the first Test. Being his liaison officer I accompanied him for shopping in Saddar Bazar and Tariq Road without any security. Before leaving for Colombo Lokuge addressed a press conference at the National Stadium and rejected security fears. “We are playing cricket here safely”

As I walked towards Brendon’s room to inform him the flight schedule at about 5pm, he was leaving his room to tell me that his government had sent a Chartered Plane which had already taken off from Colombo and would reach Lahore by 9 pm. At about 9.30 pm the Sri Lankan plane landed.

Former Sri Lankan captain and then CEO Duleep Mendis was on board along with doctors and nurses. The plane took off at 10.30 pm. Salim Altaf, Amir Sohail, Zakir Khan and myself were at the base to see the visitors off. No PCB high official travelled with the guests.

To my utter disappointment, Ijaz Butt had no clue about the extent of damage the terrorist attack had done to Pakistan in general and cricket in particular. I found him insensitive throughout the whole tragic but hectic day. It was a strange face of Butt who otherwise was an accommodative, considerate and a good listener in his business office at the Service House.

During the morning I suggested him candidly to form a committee to investigate into the attack. His respond astonished me. “The attack is the negligence of the security agencies”, he said firmly while I continued to argue that the PCB too had a fair share of responsibility.

My assertion was that it was the PCB that had actually invited the Sri Lankan cricket team not the security agencies. Sadly, burly Ijaz Butt had no reply.

I had a fair reason for my insistence to initiate an in-house inquiry. Prior to the Lankan’s visit the PCB was engaged in finalizing security arrangements with the security agencies. In one of such meetings Salim Altaf and I met with a top official of the Punjab police.

That official would check the deployment of police force at sensitive points and on buildings. If he found any lapse at any place he would inform us immediately and we would delay team’s departure to the Stadium for few minutes to deploy security officials.

The shifting of WC-2011 from Pakistan was a very serious jolt which caused PCB a massive financial loss. Lahore was the headquarters of the organizing committee, but was then shifted to Mumbai

We passed that information to Ijaz Butt in a meeting in which Wasim Bari, then director administration, Zakir Khan, then director international cricket, and others were also present. Nobody took it seriously.

Further, a change of government in the Punjab also brought changes in the police department at the top and threat was not followed up.

For instance after the attack I phoned Sheikh Salim, the SHO Liberty Police Station, but was surprised to know that he was in the Lahore High Court to attend a case proceeding.

Afresh date could have been sought from the Court in the wake of a national duty of a very serious nature.

DSP Model Town Nazir told me on my contact that he was inside the Gaddafi Stadium but he was only located when I went to the police station to bring the bus driver whom the visitors wanted to meet and thank.

ASP Sarfraz Virk (if I remember this name correctly), who was ahead of the bus in his official jeep, disappeared immediately after the attack. He closed his cell phone which opened only in the evening to inform that he turned his jeep to give way to the bus. In later years this highly coward police officer was promoted.

Negligence of the PCB can’t be ignored. Despite numerous warnings the PCB didn’t monitor the security arrangements. Even the report of Justice Shabbar of the Lahore High Court categorically stated that PCB officials could not be absolved of negligence and incompetence.

On 3rd March Wasim Bari was more concerned to place the picture of Asif Ali Zardari, then Patron-in-Chief of the PCB in the lobby on the first day of the Test match. On the second day he looked after the placement of flower pots in the compound. On the third day he was perhaps taking a bath.

What to talk about Zakir Khan’s engagements, a spoiled incompetent ladla of the PCB whose only interest was to collect invitation passes for the showbiz people.

Had monitoring request of the police official been taken seriously the tragedy could have been avoided. On 3rd March there was no policeman deployed on the roofs of fairly big buildings surrounding three sides of the Liberty round-about.

Had the policemen been deployed on roofs of these buildings no terrorist could have escaped. Ijaz Butt was responsible for not directing Bari and Zakir to monitor the route.

At the Air Force Mess while consultation were in progress about the flight arrangements of the Sri Lankan team, Aamir Sohail whispered to me. “Ask Ijaz Butt to request Ahmed Mukhtar, then Defense Minister to direct PIA management to arrange a charted plane for the Sri Lankan players”. It would have been the right gesture.

On 3rd March Wasim Bari was more concerned to place the picture of Asif Ali Zardari, then Patron-in-Chief of the PCB in the lobby on the first day of the Test match. On the second day he looked after the placement of flower pots in the compound. On the third day he was perhaps taking a bath. What to talk about Zakir Khan’s engagements, a spoiled incompetent ladla of the PCB whose only interest was to collect invitation passes for the showbiz people

I submitted the proposal to Ijaz Butt adding from myself that one high official of the PCB must accompany with the Sri Lankan team to show our solidarity with them.

Salim Altaf also endorsed the proposal wholeheartedly but Ijaz Butt rejected that instantly. His intransigence shot down the proposal which would have been a wonderful gesture from a very concerned PCB. 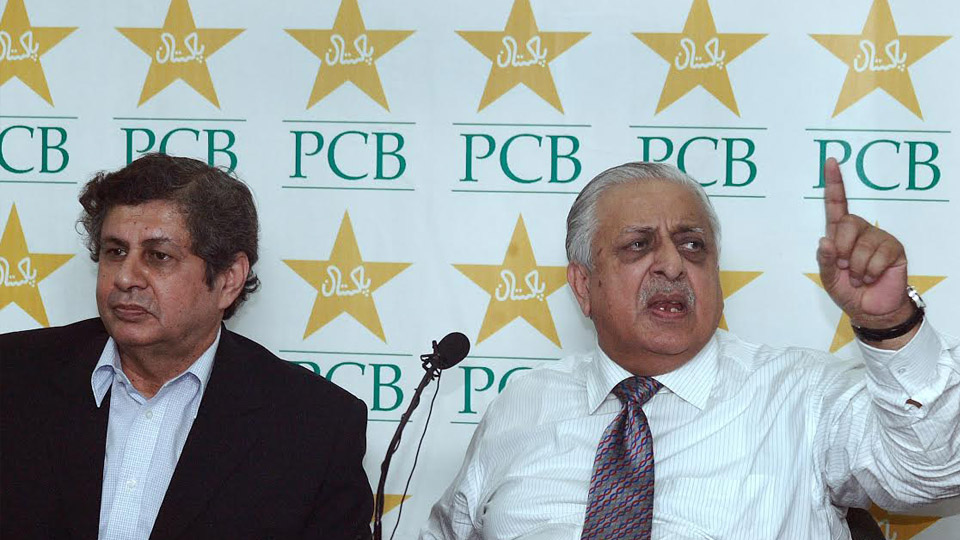 Attack on Sri Lankan team had serious repercussion on Pakistan cricket. The New Zealand team cancelled its December 2009 tour of Pakistan. Bangladesh also put off a scheduled tour by Pakistan due to security concerns.

The International Cricket Council (ICC) were forced to strip Pakistan of its hosting rights of the World Cup-2011.The WC-2011 was to be co-hosted by Pakistan, India, Sri Lanka and Bangladesh.

The shifting of WC-2011 from Pakistan was a very serious jolt which caused PCB a massive financial loss. Lahore was the headquarters of the organizing committee, but was then shifted to Mumbai. Pakistan was supposed to hold 14 matches, including one Semi-final.

Had Ijaz Butt constituted a committee or suspended one or two officials for negligence and sent any top official to Colombo with the Sri Lankan team it could have built a good image of the PCB in the cricket playing nations. Thoughtless Butt caused a colossal damage to Pakistan cricket!

Of PCB officials from Karachi