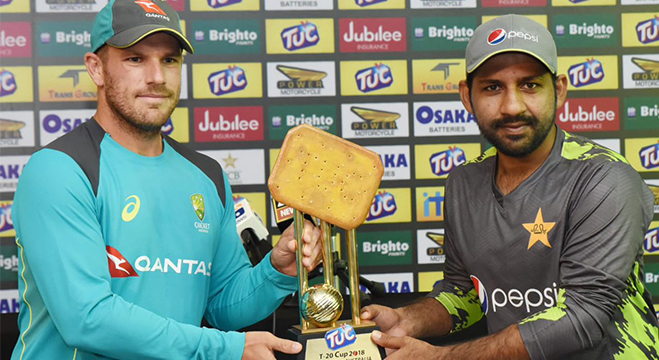 “If you win this, I will give you a biscuit,” an adoring mother or a father has been inspiring their kids to do well on a day for ages now.

But Pakistan Cricket Board had also offered a BISCUIT to — not a KID — but to international team winning the Twenty20 series between Pakistan and Australia last month.

The “Come’ on win a Biscuit” trophy was mocked at by various quarters, not least in the social media. But to PCB’s credit they weathered the storm well. But whether the PCB have learnt a lesson or nor, can’t be confirmed.

Frankly speaking, a BISCUIT on a trophy had never been seen before, because it didn’t exist before but thanks to the efficient, look-busy-do-less, marketing department of the PCB, the rights of designing the trophy are with the sponsors. So the money matters and sponsors have all the rights to prepare whatever shape of the trophy and whatever on top of it.

So the BISCUIT manufactures thought it was time to cash on to the -free-for-all trophy designing.

Insiders say that marketing chief Naila Bhatti did sign the authority and never bothered to rescind the decision that it could hurt the Board one day. How on earth you give that reserved authority to the sponsors. Come to think of a trophy if the sponsors are manufacturers of men’s under garment or a toilet cleaning product!

Believe those who were at the venue that the PCB staff present on the occasion had not seen the trophy before it was unveiled as they were as amused as the media men and broadcasters. The Australian captain Aaron Finch smiled all through the press conference as he continued to sheepishly glance at the trophy.

The BISCUIT trophy gave the vibrant social media a free day and there was hilarious trolling with no end to it.

Not to defend the PCB’s silliness, the ICC’s Twitter handle took an unwise dig and mocked it in a manner which does not suit the administrative body.

The ICC tweeted: “You vs the trophy she told you not to worry about,” ICC tweeted left anti-Pakistan elements in a split. Trying to further mock the PCB the ICC twitter handlers added a picture of Indian captain Virat Kohli and Pakistan skipper Sarfraz Ahmed holding the glittering Champions Trophy and compared it with the quizzical biscuit trophy.

But once Pakistan won the series, the PCB handelr effectively countered the ICC attack, saying “Dear @ICC Who cares? Both are ours! #PAKvAUS #NumberOneT20ITeam,” their tweet read. There were reports that the new chairman Ehsan Mani had initiated an inquiry as to how such a bizarre trophy was prepared for the series and how did the contract with the sponsors allowed them freedom to prepare whatever they want as trophy.

But it did not end here.

The Pakistan-New Zealand trophy was named “Oye Hoye” trophy is as bizarre as the BISCUIT trophy and the hullabaloo at the PCB continued.

The Real Test Kicks Off at the Oval Tomorrow

Rise up and keep standing for the ICC CT 2017 Winners