Nazimabad. Once considered to be Karachi’s hub for cricket. In the sweltering summers of the late 1970s a new phenomenon was born. The advent of the shortest form of cricket took place in the Central District of Karachi in the shape of Nazimabad Super Cup.

The idea was to create an activity for long and hot afternoons of Ramazan which served the dual purpose of killing the wait for Iftaar (breaking of fast at dusk) and have a go at city’s favourite sport cricket. A devoted lot of Karachiites regularly attended this tournament which was contested by club sides from all over Karachi.

The first couple of tournaments were played at the Nazimabad’s Eidgah cricket ground before it moved to the Bakhtiari Youth Center, sandwiched between Abdullah Girls College and Intermediate Board Office. Hence started the legacy which perhaps was the real reason of establishing Pakistan as a potent T20 force in its early days on the international circuit. Karachi’s club cricket remains arguably the birthplace of T20 cricket. 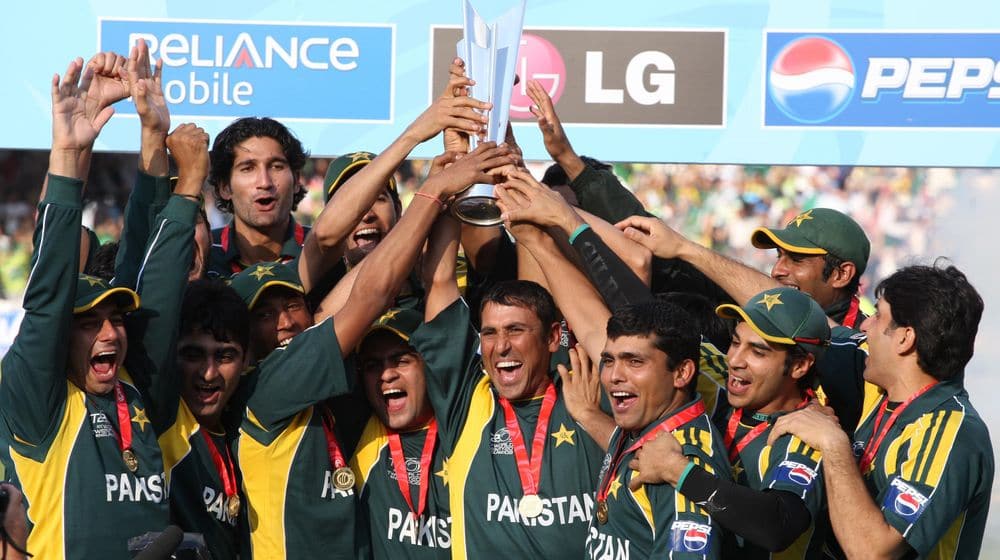 Pakistan reached the final of the first T20 World Cup in South Africa and lost there in the most painful way when Misbah scooped the penultimate ball of the final to Sreesanth standing at fine leg and allowed their rivals from across the border to be the first champions of the shortest version of international cricket.

Nevertheless in the very next edition of Cup in the English summer of 2009, Pakistan went all the way and Younis Khan lifted the coveted trophy. In the subsequent tournament Pakistan were well placed to clinch a spot in the final of the tournament after 39 overs of the 40 overs semi final against Australia before Mike Hussey launched into Pakistan’s hitherto unconquered Saeed Ajmal and catapulted his side into the final.

T20 is the only way he knows how to play cricket and he has been dealing both the Test Matches and One Dayers with the same yardstick. That’s the only way Afridi knows to play. And that is why he will be the first name which any scribe would write while compiling a global T20 team

After that event Pakistan’s T20 fortunes nose-dived and the side lingered towards the last rung of rankings ladder till their recent revival after Sarfraz took over the reigns and took them to the top of the world rankings.

In this story of two highs and a long stretching low in between, many fine exponents of the T20 art have represented Pakistan in the international arena. Chances were given to many emerging cricketers to prove their worth after performing creditably in the domestic tournaments. Some of them came good whereas others failed to live up to their domestic billing and were subjected once again to obscurity.

Out of 298 international players who represented Pakistan in three formats, a small number of 75 have taken field in a T20 International. Eight players including Pakistan’s all time great Inzamam-ul-Haq did so only once. Another 26 appeared in five or less T20Is which include another batting giant of Pakistan Mohammad Yousuf. In addition to Yousuf, this lot of eighteen players includes a trio of T20 specialists who have performed extra ordinarily at the domestic circuit but were dropped in a haste after not delivering in their limited chances on the international level.

This trio is led by Rawalpindi’s flamboyant opening batsman Awais Zia and Lahore’s Saad Naseem who are both ferocious hitters of a cricket ball. The third player is still likely to get a few more chances and make an international T20 career is the fast bowling all rounder Aamir Yamin.

The list of next fifteen players based on number of appearances contained many current and familiar names. It was a genuine surprise to see that competitors like Junaid Khan, Muhammad Nawaz, Faheem Ashraf, Rumman Raees and Haris Sohail have all won single digit caps for Pakistan in the T20s so far. So drawing the selection criterion line at a minimum of 12 international matches leaves us just with a limited group of  33 players from which to choose our all time T20 eleven for Pakistan.

This group of 33 players also threw up few surprises where few names turned up contrary to popular belief like pacer Mohammad Sami who has appeared in 13 contests and batsman Fawad Alam who have 24 caps in this format despite being labelled as a “favorite” of selectors for non-selection.

Five openers of varying credentials are vying for the two opening slots. Mohammad Hafeez and Kamran Akmal are there because of their all round credentials along with the master blasters from Muridke and Mardan respectively, Imran Nazir and Fakhar Zaman. The last name on the openers list is that of Ahmed Shahzad who again surprisingly has represented Pakistan 55 times in the shortest format. This underlines the faith of selectors in the blowing hot and blowing cold individual.

Disregarding the statistical evidence it would be much easier to give the opening slots to the two free flowing spirits of Imran and Fakhar. They both played with gay abandon and represented the right mindset for the T20 game. Fakhar’s left handedness gave him an edge over Imran Nazir’s bravado and to partner him Mohammad Hafeez edges out Kamran Akmal because of his superior all round ability.

Sarfraz as stated above may not be the best bet behind the stumps but is miles ahead of any Akmal family option. Plus his energy, fighting spirit and team work contributes greatly on the field and like Shoaib Malik he is a positive influence on the overall chemistry of the team. The easiest pick were the two fast bowling options.

Kamran Akmal, however well he bats, still cannot be imagined as a wicket keeping option for an all time XI. Similarly Ahmed Shahzad bats too selfishly for his own good and thus was unable to make the final cut. Assuming that Hafeez’s off spin option is available and legitimate, his partnership at the top with Fakhar Zaman is just the right blend to tackle any attack upfront.

The choice for the next two middle order slots was a pretty straight forward one. Only two batsmen in the history of Pakistan T20 cricket have managed a batting average above 30 through their consistent performances. Its Babar Azam with an outstanding average of 48 plus and Mr. TukTuk of high flying sixes over the long off to mid wicket arc, Misbahul Haq, who averages a decent 37 with the bat. Their competitors are Younis Khan, who despite being a great Test batter and winning skipper of the 2009 T20 World Cup does not inspire enough confidence with bat to merit a place in an all time XI.

In addition to Younis its Babar Azam’s cousin Umar Akmal who sits number three on the list of highest appearances and is yet to fulfill his tremendous “potential” followed by the duo of Fawad Alam and Sohaib Maqsood both of whom failed to rock the world despite repeated chances at this level. Hence Babar and Misbah are the chosen two to attack or consolidate as the situation demands.

Pakistan’s stocks are pretty full with world class performers when it comes to all rounders of great ability and personality. In fact it was quiet tough to drop one of the aforementioned four stars all of whom deserve a spot in the final T20 all time eleven. One player who epitomizes T20 cricket in all its glory is Shahid Khan Afridi.

T20 is the only way he knows how to play cricket and he has been dealing both the Test Matches and One Dayers with the same yardstick. That’s the only way Afridi knows to play. And that is why he will be the first name which any scribe would write while compiling a global T20 team.

That he left international cricket with 98 appearances is a sad story indeed but nevertheless Afridi is the person who is still most sought after in global leagues. The trick question was to drop one person from Shoaib Malik, Abdur Razzaq and Imad Wasim and it was a tough ask indeed. Shoaib with his ages of experience and tons of common sense on the field. Abdur Razzaq with his ability to deliver magic with both bat and ball and Imad’s incisive opening bursts with the ball and his left handedness brought major headaches for this fictional selectorial adventure.

At one point I even thought of accommodating all three and including Kamran Akmal or Umar Akmal in the line-up at the expense of Sarfraz behind the stumps but that would have been cruel with the bowlers. Hence Imad’s inferior batting as compared to the other candidates and Pakistan’s perpetual tendency to suffer top order collapses made the decision in the favour of Razzaq and Malik.

Sarfraz as stated above may not be the best bet behind the stumps but is miles ahead of any Akmal family option. Plus his energy, fighting spirit and team work contributes greatly on the field and like Shoaib Malik he is a positive influence on the overall chemistry of the team. The easiest pick were the two fast bowling options.

Think Pakistan’s success in the initial period and the name of Umar Gul springs to your mind. Fast deadly yorkers coupled with admirable control in the death overs made him a world beating performer in the early days of T20. He will be partnered with the left arm wizard Mohammad Amir who has never looked back since his return from the five year unfortunate exile. If Umar is reluctant to take the new ball duties, either Razzaq or Hafeez can do the task with equal efficiency depending on type of wicket and opposition. Near misses for the pace bowling department include Hasan Ali and renowned T20 specialist Sohail Tanvir.

Last but not the least is the selection of side’s sole spinner. Shadab Khan with his youthful exuberance and confidence has already made an indelible mark but the mastery of Saeed Ajmal just manages to nudge out the young leg spinner.

In his prime Saeed Ajmal was the most feared spinner across the formats and his T20 exploits are still considered legendary. That completes our eleven with 12th man duties being assigned to Imad Wasim who should have somehow been included in the first eleven.

For captaincy it is hard to look beyond Misbah and his deputy can be the effervescent Sarfraz Ahmed. Pakistan’s all time T20 I team in the batting order would look like this: