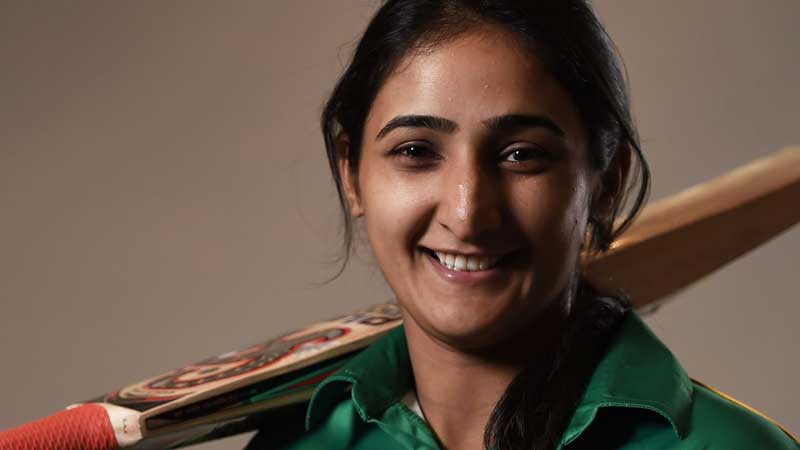 Bismah Maroof, one of the pioneers of Pakistan’s Women Cricket, burst onto the international scene as a 15-year old with a lot of promise. Gradually the stylish left-handed batter, from Lahore, became the mainstay of Pakistan batting.

Bismah, in 108 one day International matches so far, has piled up 2,602 runs with 14 fifties while in the same tally of T20 Internationals she has scored 2,225 runs with 11 fifties.

The southpaw took over the captaincy from Sana Mir last year and the Pakistan Cricket Board extended her tenure until the recently concluded T20 World Cup.

Bismah spoke to ScoreLine and recalled her early days, transformation, outlook, vision for Women’s cricket and other pertinent matters. The 28-year old also weighed the structure of Pakistan and established cricketing nations.

Cricket was a very popular sport in my family and I started playing with my brothers when I was only about 4-5 years old. I would play with a plastic bat back then and my interest in the sport developed hence I continued. I was 13-14 years of age when one of our relatives informed me about the trials for the national women team. At the trials I played with the hard ball for the first time. Imtiaz Sir (teacher), at the trials, advised me to practice with the cricket ball which I did, with the help of my father, for the next few months. Meanwhile, I got selected for the Pakistan team as well. The Singapore series was my first tour, where teammates would fondly call me the ‘baby of the team’ since I was the youngest of the lot. It was tough because I never stayed away from home. My family was very supportive and that was the reason I pursued cricket as career.

Road ahead for Women’s Cricket in Pakistan:

When I compare my start, 12 years back, to today the standard has improved a great deal in fitness, skills and other aspects. In the last couple of years the grassroot development has been encouraging as well. There are five regional academies too which are polishing talent, the pathway and direction are heartening at junior level while international events too are in the overall scheme of things. The pool of players is also expanding and I can foresee a bright future of women’s cricket in Pakistan.

I never thought of captaining the Pakistan team, it was not in my mind when I started my international career. It is indeed a great honour to represent the country and later on lead the national team. After getting the responsibility, I received a lot of respect, I must say I am immensely blessed. Of course there is an obvious difference between representing and leading the team because the leadership role brings along the responsibility of the entire team, the main role as the captain is to guide and show direction to your teammates. The most important part of captaincy is the decision making in which I had a lot of support from my players. Under Sana Mir Pakistan team were in the development phase while when, the transition phase was on and the outfit was taking a new shape with the blend of young and experienced players. We are in an era where people have started following women’s cricket therefore the expectations are higher than before and the girls are ready for the challenge.

The Corona Virus is an unpleasant situation. This is an unimaginable scenario which of course looks unprecedented. But we have to accept it and as athletes we have to absorbed this reality and work alongside. We are hopeful, at the same time, that sporting activities would resume soon.

Interest in other Sports:

When I was in school I was very fond of playing netball, baseball, badminton, including watching football but afterwards cricket took over. Even today when I get time I play Badminton and Table Tennis.  I also watch Tennis pretty often.

Definitely yes, because athletes would draw inspiration from them. In Cricket, Sana Mir is a role model because her experience of dealing with challenges and hurdles are very handy for youngsters.

Comparison of Pakistan’s performance with the likes of India, England and Australia:

There is still a gulf between top four teams and Pakistan. I went to Australia as caption of the ICC development team and there I experienced the gap in the structure. The level of domestic competition in Australia is very competitive which trains players both technically and mentally. We need to work very hard. We also need to uplift the facilities so that the standard could be improved in future

Shape up or ship out, Arthur warns Pakistan players