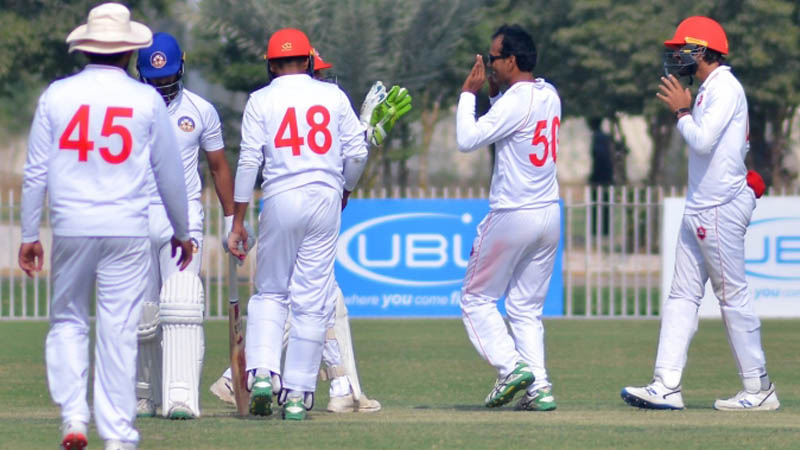 Karachi: On the second day of the seventh round of the Quaid-e-Azam trophy, Northern’s Nauman Ali became the first to reach 50-wicket landmark in the competition while Southern Punjab’s fast bowler Amir Yamin nailed Balochistan with 6-47.

At the National Stadium, Southern Punjab have piled up 149 for 2 in their second innings.

Earlier Amir Yamin’s devastating spell of 6-47 limited Balochistan to 164. Mohammad Ilyas bagged two, Zahid Mehmood and Zia-ul-Haq got a wicket each. Ayaz Tasawwur played a sheet-anchor role however was castled by leg spinner Zahid Mehmood on an extraordinary delivery which spun sharply from outside the off stump to rattle wickets. Tasawwur made 76 runs. Jalat Khan (20) and Bismillah Khan (24) were the other prominent scorer.

At the State Bank Stadium, Khyber Pakhtunkha, in their first innings, finished the second day at 260-4 against Sindh. The highlight of the KP’s innings was the unbeaten 124-run knock by Kamran Ghulam, the other not-out batsman Rehan Afridi is on 30. Fakhar Zaman got dismissed on 62. Sindh’s fast bowler Tabish Khan got two scalps. KP started the second day with five without loss. Earlier Sindh were bundled out for 229 in their first innings.

At the UBL sports complex, Northern, at the culmination of the second day, are 77-2 against Central Punjab.

Sarmad Bhatti and Nasir Nawaz have returned to the pavilion for 13 and 42 runs respectively while Umar Amin (17) and Faizan Riaz (3) will resume the innings on the third day. Hasan Ali and Ahmed Safi grabbed a wicket each.

Earlier, in reply to Northern’s 243, the defending champions, Central Punjab got all-out on 234.

Nauman Ali, once again was the star for Northern, who pocketed seven CP batsmen for 84 runs. Sadaf Hussian, Shadab Majeed and Hammad Azam got a wicket each.