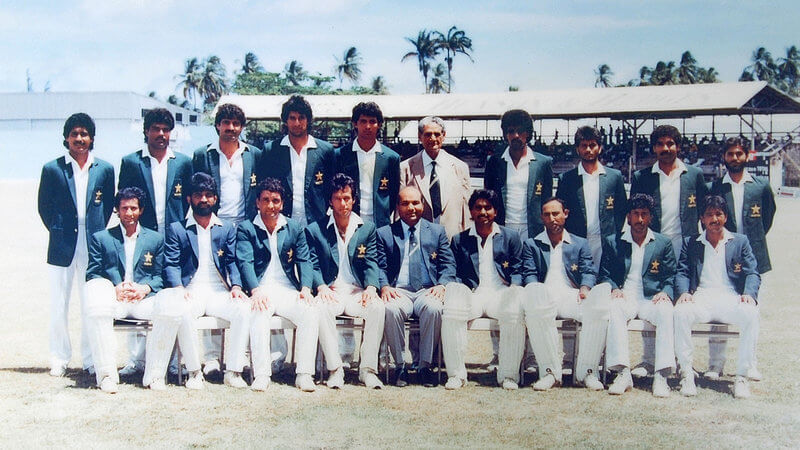 How the West Indies was won

What if I told you that Haafiz Shahid, Moin-ul-Atiq, Naved Anjum, Aamer Malik, Zakir Khan and Ijaz Faqih were part of Pakistan’s touring squad which participated in arguably the most Iconic Test series Pakistan has ever played in. It was a series which was the most keenly contested one and the one which ultimately ended with honors even. It was the squad that went into the lion’s den and barring a couple of unfortunate umpiring decisions towards the end, almost returned home as victors.

This particular side that was skippered by a person who had already retired from international cricket  a few months back and was requested by an authority no less than the President of Pakistan to come out of retirement and lead his country on this momentous tour. And what a comeback it proved to be.

However, before moving on I must fill in the information holes left in the preamble. The Pakistani President mentioned here was the cricket loving dictator General Zia-ul-Haq, the sportsman requested to shelve his retirement plan was no one other than Imran Khan and the series being mentioned here is the iconic 1988 Pakistan-West Indies three Tests contest played on the picturesque Caribbean grounds.

The West Indian side of the late seventies and eighties was inarguably their strongest and among the three or four greatest team units of all cricket history. Clive Lloyd and after him Vivian Richards led this supremely talented bunch of cricketers to a string of Test and ODI triumphs fashioned by their attacking batsmen and hordes of ferocious fast bowlers who put the fear of God in the hearts of opposing batters.

The only side which consistently challenged them in that era and came close to upstaging this all conquering unit was Imran Khan’s Pakistan team of the eighties which drew two successive Test series in the late eighties against these demolition experts.

After drawing the 1986-87 series against the West Indies held on Pakistani soil, the Pakistan side went on to record their maiden Test Series wins on the Indian and English soils. A heart-breaking home defeat in the 1987 World Cup semi-final led to Imran’s retirement and it was only the challenge of taking on the West Indies on their home turf which brought him back at the helm.

The tour itself did not start very promisingly as Pakistan were blanked 5-0 in the one dayers and to make things worse their experienced off spinner Tauseef Ahmed had to fly back home quite early and was replaced by Ijaz Faqih who partnered Abdul Qadir in two of the three Test matches.

A tall bloke by the name of Curtly Ambrose made a terrifying impression in the only tour game preceding the internationals and was immediately drafted in the West Indian side to compliment the already fearsome quartet of Malcolm Marshall, Courtney Walsh, Patrick Patterson and Winston Benjamin. Pakistan’s biggest cannon Wasim Akram was initially struggling with a tricky groin missing most of the one dayers and only came into his true elements in the final Test match of the series.

All of the aforementioned Pakistani stalwarts from the touring squad of eighteen like Haafiz Shahid, Moin, Zakir and Naved Anjum, got their chances in the one dayers and performed with varying degree of success but when it came to the real challenge of Test series, Pakistanis opted to stick with the core of proven hands and made minimum changes during the nerves draining encounters. 9 out of 11 positions remain unchanged throughout and were occupied by the usual suspects like Imran himself, Javed Miandad, Saleem Malik, Mudassar Nazar, Shoaib Mohammad, Abdul Qadir, Saleem Yousuf, Wasim Akram and Rameez Raja.

The last two places were occupied by the two Ijazes, Ahmed and Faqih, for the first two Tests before being replaced by Aamer Malik and Saleem Jaffer for the final encounter.

Such consistency in selection was a crucial element in team cohesion and mounting a serious challenge to the all-conquering West Indian side. The fact that West Indies team was unbeaten in Test matches at home for ten years just added spice to this match up and outlined the seriousness of task for the Pakistani tourists.

The venue for the opening Test match was Georgetown, Guyana, the only South American main land entry in the West Indian collection of cricket playing countries. Buoyed by the absence of Vivian Richards and Malcolm Marshall from the West Indian line up, Pakistan did not let the opportunity slip.

They drew the first blood by inflicting an eight wicket defeat within four days. Headlines were stolen by the captain and vice-captain of the touring side. While Imran was all fire and brimstone at the bowling crease taking seven wickets on the opening day and a total of eleven in the match, his deputy Javed Miandad was Pakistan’s mainstay at the batting crease with a classy hundred which ensured a match winning lead of 143 runs after the first outing.

A plucky fifty by wicket keeper Saleem Yousuf also contributed in establishing Pakistan’s ascendency. In the second innings again it was Imran the destroyer-in-chief, this time aided by his trio of spinners in Abdul Qadir, Ijaz Faqih and part timer Shoaib Mohammad who cleaned up the mighty West Indians for 172 leaving Pakistan only 31 runs to knock off and go one up. It also ended a ten years unbeaten stretch at home for the “Black Thunder”.

The return of Richards and Marshall added spine and spark to the West Indian line up for the second test match played at the Port of Spain, Trinidad. It immediately converted the match into an even contest and produced one of the most pulsating matches and nail biting finishes of the modern cricketing history.

When 15 wickets fell on the opening day everyone thought this Test can finish even earlier than the first one. Batting first West Indies again collapsed against their familiar foes Imran and Abdul Qadir for a paltry 174.

However Malcolm Marshall’s hostile and spirited opening spell saw the Pakistanis reduced to even more precarious 55-5 by the close of play. Then came a series of dogged rearguard actions which changed the course of that match multiple times. Firstly it was Saleem Malik who stroked Pakistan into a first innings lead of 20 runs which seemed improbable the evening before. He was aided by the other Saleem, the wicket keeping Yousuf, who hooked and pulled bravely through his innings.

West Indian second innings started shakily and early on the third morning they were 81-4, just 61 runs ahead and with skipper Richards as last of the specialist batsmen at the crease. The match took yet another turn as Richards exhibited his class by notching up a brilliant hundred. Inspired by Viv, keeper Jeff Dujon too reached the three figures and helped West Indies to a seemingly invincible 391.

A summit of 372 runs to climb for the Pakistanis if they wanted to rewrite history. A solid opening stand of 60 runs was followed by three quick wickets on the fourth evening and the day ended with the West Indian win being discussed as the most likely of scenarios. That man Javed Miandad had other ideas though.

Four hours of solid run accumulation and shepherding his lesser partners yielded him his second hundred of the series and brought down Pakistan’s target to less than 100 runs with five wickets standing. Then came another reversal in fortunes as Javed and his partner Ijaz Ahmed departed in quick succession and possibility of chase went out of the window.

Stout defense by the lower order brought the match to the last over with some drama still left to unfold. Richards brought himself on for the last over of the match and trapped Saleem Yousuf leg before with his very first ball leaving last man Abdul Qadir to face a possible five deliveries. Amidst unbelievable tension Qadir managed to hold on with the entire West Indian side encircling him around the wicket. A just finish to a memorable match by any standards.

The same fluctuating fortunes and cricketing flamboyance continued in the final Test at the West Indian fortress of Bridgetown, Barbados. West Indians needed to win the match to draw level in the rubber and they managed it but not without scares and some unsavory incidents which spoiled the profile of highly competitive series.

Only three runs separated the two evenly matched sides after the conclusion of the first innings. Scores of 300 plus by either side included a highest of only 67 runs among the five half centuries scored. This underlined the quality of cricket being played by both teams. When a mid-innings collapse reduced Pakistan to 262 in their final batting effort of the tour, the match hung in balance.

Pakistan bowling now led by rejuvenated Wasim Akram had their opponents 8 down for 207, still 60 runs adrift of target. Then the ugliness creeped into events. Two very close decisions went into the favor of the home side and a frustrated Abdul Qadir squabbled with a spectator at the boundary line. Riding their luck with umpiring close calls, the West Indians scrapped home with two wickets and were able to square the series. For the Pakistan team it was a case of so near yet so far as they genuinely believed that they got both Dujon and Benjamin dismissed.

An amazing series left everyone lusting for more of the same and also showed that the West Indian side can be beaten at home. The chinks explored and exploited by the Pakistanis on that tour were further exposed with the passage of time and the downslide never ended. Now that glorious chapter of Caribbean supremacy has become a part of the cricket folklore.