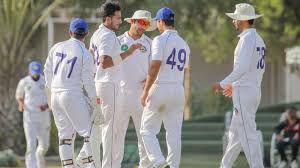 KARACHI: A happening second day of eight round of the premier first class tournament, Quaid-e-Azam trophy on Tuesday as centuries were scored by Khyber Pakhtunkhwa’s Adil Amin and Sindh’s Sharjeel Khan while six-wicket hauls were grabbed by South Punjab’s Zahid Mehmood and Balochistan’s Jalat Khan.

Central Punjab’s skipper Hasan Ali has had an eventful day, who scored a quick half-century and also bagged eight wickets in a day. Central Punjab are closing their third victory in a row.

The Central Punjab captain clubbed an unbeaten 50 off 33 balls to lift his team to 369 before he recorded his 10th five-wicket haul, which bundled out Balochistan for a paltry 130, and took three more wickets after enforcing follow-on.

Balochistan’s first innings lasted only 38.2 overs and they were tottering at 130 for six in their second innings and needed another 109 runs to make Central Punjab, the title defenders, bat again. Jalat Khan stood out with six for 116. This was left-arm orthodox’s third five-wicket haul of the season.

Pacer Waqas Maqsood took three wickets for 38. Wicketkeeper-batsman Adnan Akmal and Captain Imran Farhat were the only batsmen to resist Central Punjab bowlers with 33 not out and 30.

At the UBL Sports Complex, Southern Punjab were struggling at 145 for five in reply of Khyber Pakhtunkhwa’s daunting 487.

Off-spinner Sajid Khan continued to lead Khyber Pakhtunkhwa’s bowling attack as he took three wickets for 45 runs from 13 overs, while the other two batsmen were dismissed by Arshad Iqbal and Khalid Usman.

Zain was unbeaten on 64 and had smashed nine fours from the 107 balls he had faced on day two, while Salman made a 53-ball 45, which included eight fours. The pair stitched a 91-run stand for the second wicket, before Sajid reduced the opposition to 134 for five from 104 for one.

Southern Punjab are 342 runs behind Khyber Pakhtunkhwa and Zain will be joined by Ali Usman (six not out) on the third morning of the fixture.

Earlier, Adil Amin converted his overnight score of 76 into his career’s fourth first-class century as he scored a brilliant 172. The 30-year-old faced 330 balls and smashed 15 fours and three sixes.

Khyber Pakhtunkhwa started the day’s play at 296 for three and Adil had in-form Kamran Ghulam as his partner who added 15 runs to his yesterday’s score before he was dismissed by leg-spinner Zahid Mahmood, who recorded his career’s fifth five-wicket haul with six for 163, on 160.

At the National Stadium, a fantastic century by Sharjeel Khan gave Sindh a 150-run first innings lead over Northern.

Sharjeel’s 164-ball knock that had Sindh placed at a comfortable 353 for five.

Saad Khan and captain Asad Shafiq scored 41 and 46 not out, respectively, which further consolidated Sindh in the match. When play resumes on Wednesday, Saad Ali, who is unbeaten on 23, will join Asad.

Sindh, who are placed at the bottom of the points table, have pocketed nine bonus points, while second-ranked Northern have taken two.