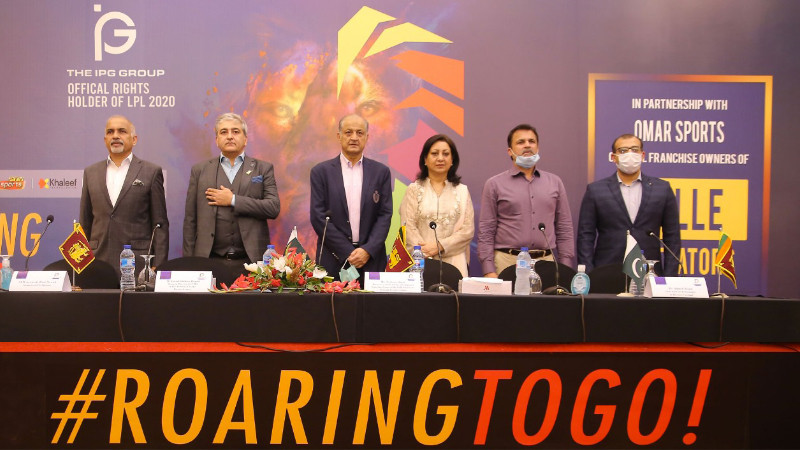 Gladiators to be part of Lanka Premier League

Karachi: A Pakistani outfit, Galle Gladiators will be part of the Lanka Premier League 2020, a franchised based T20 event, scheduled to be held in Sri Lanka from 14th November to 6th December this year.

The IPG group is a partnering franchisee with Galle Gladiators in Lanka Premier League (LPL). This announcement was made at a ceremony held in Karachi on Wednesday (September 2).

The President of the IPG, Air Vice-Marshal  Razi Nawab (R), said on the occasion that Sri Lanka and Pakistan are all weather friends and both countries stood by each other in trying times. Sri Lanka, he recalled, expressed a great gesture by touring Pakistan despite an unfortunate incident with them in 2009.

“A friend in need is a friend indeed. Sri Lanka lent support to Pakistan cricket in the recent past and we are paying back in our capacity to boost Sri Lanka cricket”, Razi Nawab said.

The Chief Executive Officer of the IPG, Jawad Ghulam Rasool thanked the Sri Lanka Cricket (SLC) for imposing trust in the IPG. He vowed to put together a league which, he said, would be a welcome addition to the already existing T20 extravaganzas around the globe.

“We, at the IPG group, believe in our vision of creating a world class league with LPL”, Jawad Ghulam Rasool mentioned.

“With the global pandemic, we take this as an opportunity to bring back the spirit of sports to cricket fans all over the world”, the IPG chief executive officer added.

The IPG group is the official Rights Holder of the LPL 2020, the tender rights include the following.

“SLC and IPG group will work closely to bring in a world class sporting experience for the fans of cricket in Sri Lanka and worldwide, featuring the biggest names in the cricketing world”, Jawad Ghulam Rasool concluded.

Meanwhile the owner of Galle Gladiators, Nadeem Omar revealed the head coach and the icon player of his team, adding that they would try and make a mix of good players, available in the draft list.

“Moin Khan has been appointed as the head coach of the Galle Gladiators while Shahid Khan Afridi will be the icon player of the team. We will try and get the likes of Shoaib Malik and Mohammad Hafeez as well”, Nadeem Omar said.

The team owner also revealed his association with Sri Lanka and described the nation as very friendly.

“I have been to Sri Lanka about 200 times and always found the people very generous. It is not about profit of loss, I am becoming part of the venture for the love of Sri Lanka”, Nadeem Omar said.

Nadeem Omar, the director of Omar Associates supports thousands of Pakistan cricketers of all ages, some directly as players and employees, many more through a range of activities at the grass-root level.

Omar Associates maintains seven or eight teams, including under-16s and under-19s, veterans and a women’s team which, in 2015, won the Benazir Cup.

“As we speak I have not spoken to Sir Vivian Richards for the mentorship but I will definitely try to rope him in for the role”, Nadeem Omar said.

Moin Khan, the head coach of Galle Gladiators, is also looking forward to performing well in the LPL.

“I have a decades old association with Nadeem Omar and the IPG group and I am looking forward to the challenge in the LPL as well. We have a team with great understanding and I hope we will deliver the goods on the field”, Moin Khan hoped.

“Shahid Afridi is a wonderful addition to the Gladiators family and his experience will be very handy for our players. We will try and constitute a formidable outfit through the draft”, Moin Khan concluded.