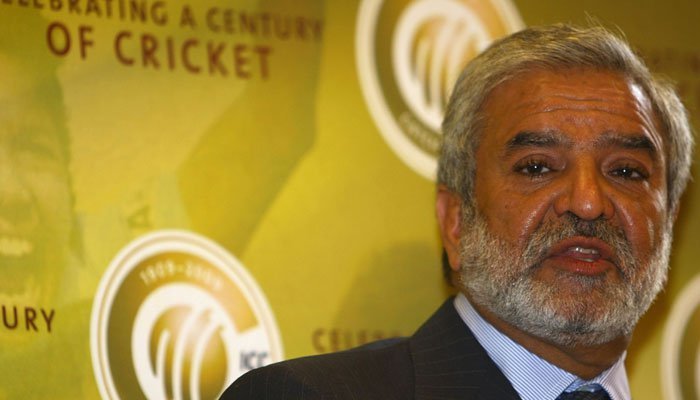 Ehsan Mani, newly nominated member of the governing board, is destined to become the chairman of the PCB. It would a mere formality when the spineless governing board would hold its meeting and select him as its new chairman. After having served in the ICC as its ceremonial president, Mani’s new innings in the PCB would be interesting and minutely observed not only by his predecessor Najam Sethi in his tv programs but also by passionate cricket lovers in Pakistan.

Luckily Mani has very few critics in Pakistan and he would face less opposition to bat at the docile pitch of the Gaddafi Stadium. However, his decisions to streamline the affairs of Pakistan cricket would be closely watched and his mistakes would soon turn this docile pitch unplayable for him. Unlike his predecessor who was being protected out of the way by convicted Nawaz Sharif, Ehsan Mani would not enjoy such backing from Imran Khan.

Known for his vast experience in corporate management it wouldn’t be difficult for Mani to monitor the process and progress of awarding broadcasting and production rights, instadia advertisements and other contracts for the next edition of the Pakistan Super League. In fact, he would handle all these issues in a more professional and transparent manner.

Unlike garrulous Sethi, Mani would handle the litigation case in the ICC against the BCCI for not honouring the MoU signed with the PCB in 2014. The PCB claims $69 million as damages from its counterpart in India. There is likelihood that the PCB would reach an out of court settlement with the BCCI. That would be beneficial for both the Boards.

Holding PSL matches in Pakistan would also not a big problem for Mani because of his more impressive and proven international recognition in the cricket world. He could easily convince various international boards and also foreign cricketers representing various franchises in the PSL to play on Pakistan’s soil.

I am sure that he would also succeed in bringing international cricket back in Pakistan. And a long awaited bilateral series with arch rival India can’t be ruled out in the near future. With the backing of the prime minister and a renowned international cricketer, Mani’s half task is done. So he would face no problem in dealing with and solving abovementioned issues.

However, the most challenging task before Ehsan Mani would be to eliminate the powerful PCB Mafia XI enjoying their jobs in the Gaddafi Stadium, National Stadium and National Cricket Academy which has now turned into Notorious Cricketers’ Academy. Starting from their godfather Subhan Ahmad and his aides in the Gaddafi Stadium to the likes of Ali Zia, Shahid Aslam and Mohsin Kamal in the NCA, the list is filthy long. There are apprehensions that the PCB Mafia XI would go scot free under Mani which would be disastrous for Pakistan cricket!

Some members of the PCB Mafia XI enjoy good relations with Mani. Many others would find some traditional ways to butter him in an attempt to protect their jobs. I am sure that they would have already started these efforts. For instance Muddi Paa (Muddasar Nazar) would go to any length to protect Ali Zia and Mohsin Kamal. Even he would not desist from requesting Imran Khan for their comfortable stay in the NCA.

The PCB needs a complete purge to get rid of courtiers and pigmies. On principle, it is imperative for the new chairman to immediately sack/suspend all those PCB officials facing FIA’s investigations and many chariyas (Sparrows) obliged by his predecessor in the Board. Last but not the least, Mani would have to tackle another person from Islamabad who maneuvers and finds a place in every chairman’s good book. This notorious blackmailer has many vested interests in Pakistan cricket and he would go to any length to safeguard them. Good Luck Mr. Ehsan Mani if you make an endeavor!