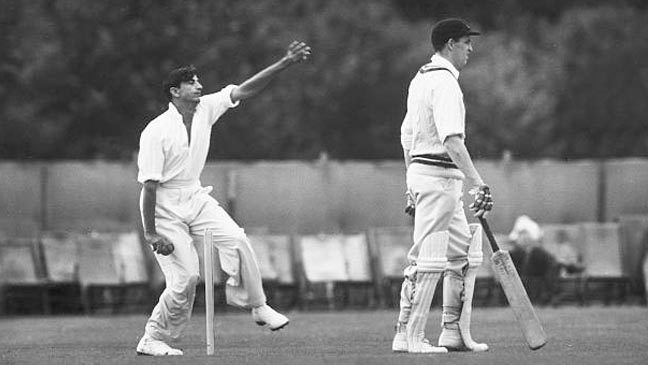 The first non-English bowler to excite my attention (it was after all the era of Trueman and Statham) watching test cricket on TV as boy was Fazal Mahmood.

This canny medium-pacer had been lithe and quick in his early days. By the time I saw him operating against England in 1962 he was stocky and short on pace, and in truth this series, his last, was not a great one for him, and he was called up only as last resort. Yet on occasion he mesmerised the English batsmen with off and leg cut, and quite extraordinary late swing, and was very hard to score off. His last two test wickets were those of Dexter and Cowdrey.

Conditions were damp at The Oval as England’s Tyson and Loader, both on debut, blew away Pakistan for 133 in the first innings. Yet some great bowling by Fazal reduced England to a first innings deficit of 3 as they were dismissed for 130, Fazal taking 6 for 53 in 30 overs

Finding himself narrowly on the Pakistan side of partition in 1947 (he was actually selected for India originally), he rapidly became a mainstay of Pakistan’s early efforts in test cricket. Despite many consistent performances spanning about 14 years, his greatest hour was without doubt at The Oval in the final Test of Pakistan’s first tour of England in 1954.

It was a low-scoring but nerve-racking game, the outcome of which had in no way been predictable given Pakistan’s somewhat lame performances on tour to that point (mercurial has always been the adjective of choice when it comes to Pakistan cricket). The test series was much affected by rain and an England win and two draws left Pakistan one down going into this final test. Denis Compton had walloped Pakistan’s bowlers for 278 in the third test. 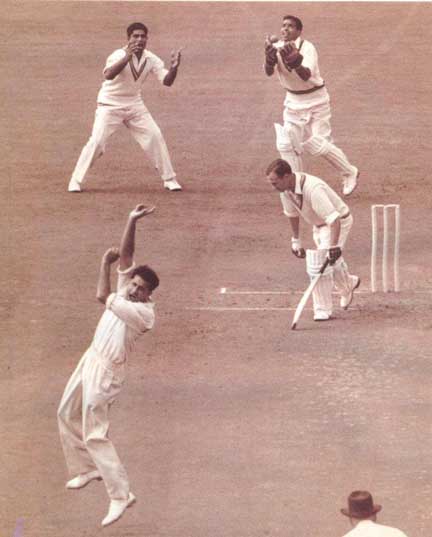 Conditions were damp at The Oval as England’s Tyson and Loader, both on debut, blew away Pakistan for 133 in the first innings. Yet some great bowling by Fazal reduced England to a first innings deficit of 3 as they were dismissed for 130, Fazal taking 6 for 53 in 30 overs. Only Compton with 53 was able to cope with Fazal’s swing and persistent line and length. (Compton once described Fazal as ‘unplayable in the right conditions’ – this from a man who had scored 278 against an attack including Fazal).

In their second knock Pakistan fared only slightly better, grinding to 163 all out. This time it was spin that caused them problems, Wardle taking 7-56 in 35 overs. Watching must have been for devotees only given the very slow accretion of runs, but they must have had their nerves shredded (between showers) even before the game moved into its final phase.

This left England with a target of 168, but good batting by Peter May carried them much of the way to victory at 109 for 2, less than 60 to get with 8 wickets in hand, and Compton and May seemingly in control. Fazal made a crucial breakthrough dismissing May at 109, then Evans. He had according to some accounts simply grabbed the ball from his captain and started bowling without permission. Graveney was out to Shujauddin for 0, and Fazal then took the all-important wicket of Compton, caught behind by Imtiaz for 29.

At 121 for 6 England’s middle order had been dismantled with 4 for 12 in a few overs and they still needed 47. Wardle and Tyson put up stern resistance for 90 balls between them but were unable to move the score much forward.  Fazal eventually removed both of them, Loader was soon out and the last man McConnon was run out going for a quick single to give Pakistan an extraordinary victory by 20 runs. Thus their first series in England was creditably drawn, but they owed it all to Fazal whose match figures were 12 for 99. He bowled 60 overs with an incredible 27 maidens.

One might think that Fazal was an English-style swing bowler who flourished under leaden skies, but he did not often have that privilege, at least in Test cricket – he was truly devastating in the Lancashire league for three seasons in 1957-9. In fact he was equally successful in the arid conditions of the subcontinent, where 10 of his 13 test 5-fers were taken. For example at Lucknow in 1952 Fazal destroyed India with 12-94 in 51 overs to give Pakistan victory by an innings. It was their first ever test victory. It is said he was roused by taunts from the crowd that Kashmir would be taken back the same way as India had defeated Pakistan in the last match at Delhi.

Off the field Fazal was the Imran Khan of his day –tall, handsome and debonair, sporting a cravat and a cigarette-holder, his wavy hair neatly held down by Brylcream. If he had been English he would have rivalled Denis Compton for that famous place on the Brylcream hoarding

Even now it is said that in the snowy heights between India and Pakistan in Kashmir a shell is sometimes lobbed over when a wicket falls in an India v Pakistan match. These were emotional days and the Indian team’s poor performance resulted in them narrowly escaping the crowd’s outraged, frenzied attack on their dressing room, which was burned to the ground.

It was typical of Fazal that he was determined to teach the Indian team a lesson after the taunts, and that despite initial failure to break through on the jute-matting pitch (he had only experienced coir matting before, which was very different), he adjusted to a seam-up approach with devastating consequences. On slow feather-bed wickets he employed cut rather than seam or swing, again to very good effect. He was the ultimate resourceful bowler and a captain’s dream – shock bowler and stock bowler all in one, like Glenn McGrath. 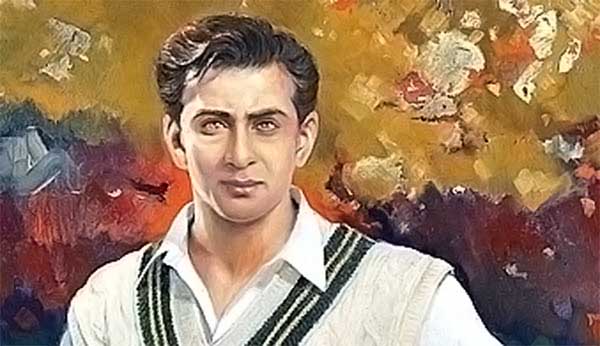 He was indeed Pakistan’s answer not just to Glenn McGrath but to Sydney Barnes. Still to my mind one of the greatest bowlers, although unfamiliar to those whose recollection starts with the terrible twins Wasim Akram and Waqar Younis, and Imran Khan. These great bowlers built on a tradition of skilful Pakistani fast bowling started by Fazal. All in all he played 34 tests, taking 139 wickets at 24.70; he took 4 wickets 6 times, 5 wickets an incredible 13 times, and 10 in the match 4 times. He was the first Pakistani to take 100 test wickets – in only 22 matches.

His figures against Australia were 24 wickets at 13 apiece. His economy rate was less than 2.10 an over, an indication that when all else failed at least he was able to apply the noose on the scoring rate even on good pitches against world-class batsmen. I recall vividly his nagging line and length and the frustration he induced even in those slow-scoring days when three an over was considered racing along. He was also no mug with the bat, going in at number 8 and with a test half-century to his name.

Off the field Fazal was the Imran Khan of his day –tall, handsome and debonair, sporting a cravat and a cigarette-holder, his wavy hair neatly held down by Brylcream. If he had been English he would have rivalled Denis Compton for that famous place on the Brylcream hoarding. He negotiated the politics of Pakistan cricket – as always it was stepping through egg-shells – with aplomb (he made a good start by marrying the daughter of Pakistan’s first captain, Mohamed Saeed).

Fazal remained influential in Pakistan cricket for a long time, and passed away in 2005.Hanif Mohamed described him as not just the ‘doyen of Pakistan bowlers’ but a ‘great human being’.