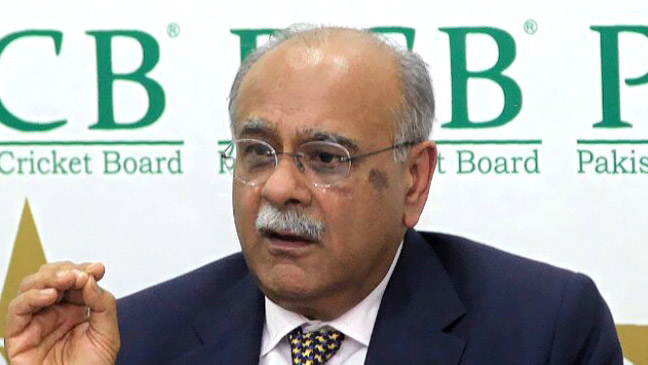 Big-headed Najam Sethi, the only legacy of disqualified prime minister in national cricket, who doesn’t know the alphabets of cricket is adamant to fight legal battle against the Board of Control for Cricket (BCCI) for not honouring the Memorandum of Understanding (MoU) signed by the two boards in 2014.

Despite sane advices from all concerned well-wishers of Pakistan cricket that the PCB’s chances of winning the battle are bleak, the Sethi led Board has approached the ICC to take up the matter with the BCCI for failing to honour MoU. The Dispute Resolution Committee of the ICC headed by Michael Beloff QC will take up the issue and start a legal procedure to arbitrate on PCB’s compensation claim. The ICC Committee also includes representatives of Code of Commission, Mike Heron QC and Justice Winston Anderson as members.

According to the PCB it was expecting to fetch earning of US$ 70 million from the two series with India. The PCB has already earmarked an exorbitant amount of over a billion rupees to file its claim and has sent a legal notice to the BCCI seeking US$69 million in compensation. That means that the PCB is not giving up their fight against the BCCI.

The prospects of PCB’s legal battle success against the BCCI look bleak. Former chairman of the PCB Zaka Ashraf has already warned that the PCB’s legal battle against India is good for nothing and it will not bring anything fruitful for Pakistan.

He claims that the MoU was not a properly drafted agreement as it has no clause, which may allow Pakistan to claim compensation or to go to any court of arbitration against the BCCI for not honouring the commitment.

Former president of the ICC president Ehsan Mani is also not optimistic about the outcome of PCB’s case. He believes that if at all a miracle happens and the PCB wins the legal battle, the fallout of that success would be disastrous for Pakistan cricket. The filthy rich BCCI would leave no stone unturned to damage Pakistan cricket at every international cricket forum. Zaka Ashraf also endorses Ehsan Mani’s apprehensions and says: “I believe that following this tussle, the BCCI will do efforts to isolate Pakistan in international cricket by blocking cricket series for us”.

In the backdrop of such advises it has become imperative for the BoG of the PCB to revisit their earlier decision and call an extraordinary meeting to ask certain pertinent question from Sethi because hard earned PCB money is at stake. This purported MOU was signed during an ICC board members meeting.

They should ask Sethi as why did not he obtain signatures of any ICC board members on this document as witnesses? Why Sethi accepted this purported conditional MOU from the BCCI, when he himself voted without conditions/reservations, in favour of the Big3 formula? Why Sethi accepted this purported MOU without the agreement of the BCCI to include the clause of the, international court of arbitration, as was aggressively taken up by Zaka Ashraf?

The members of the BoG must also examine the original document, claimed by Sethi as a MOU, between the BCCI and the PCB and confirm that it was legally a MOU. They must confirm whether the purported MOU was written on a legal paper or on the letter head of the BCCI or on a plain paper. Does the document purported as MOU mentions specifically that it was a MOU document? They must check as if the document was signed by the BCCI president N. Srinivasan, who was physically present in that ICC meeting. Since the document was counter signed (at that time) by Sethi as chairman PCB why he allowed a lower rank unauthorized and honorary BCCI person to sign it?

The BOG must ask Sethi as to why he was not taking legal action against the ICC for not paying USD15 million per year to the PCB, which he had told to the media and was widely reported in the press that the ICC had made PCB as Big4 and had more than doubled annual payments to PCB to USD 15 million (after Sethi voted for the Big3 formula which enhanced astronomically BCCI’s financial share from the income of the ICC)? Had Sethi made a deliberate wrong statement at that time to hoodwink the Pakistani public, from the main issue of his casting an unconditional vote, in favour of making India, the king of the ICC, which started getting lion’s share of the ICC’s income?

In a situation when the PCB needs support of other cricket playing nations to resume international cricket in Pakistan it has started an unnecessary legal battle against the BCCI. It is a known fact that the BCCI does not have the authority to commit to a bilateral series with Pakistan without permission from their government.

Sethi knew this well. But he is adamant to waste PCB’s money with the help of PCB’s BoG which has now become a mystery. Rs. 1 billion amount is mouth-watering for the top management of the PCB. For them personal interests are above the national interests. They know that the Patron is terribly busy in some other very sensitive political and religious issues which needs his full attention. They want to grab the opportunity to serve their personal interests and fill their coffers. The BoG of the PCB must take a serious view of Sethi’s wrongdoings and demonstrate their guts to revoke their early decision of approving Rs. 1 billion as legal cost to file the case against the BCCI.