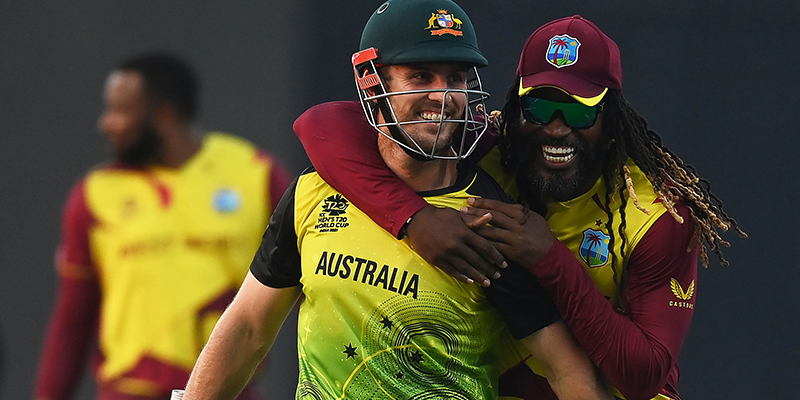 After five and a half years, and from the ashes of the cancelled 2020 World Cup, has come the 2021 tournament, the group stages of which have recently concluded. With last year’s edition canned due to Covid 19, the 2021 competition looked increasingly unlikely with the global pandemic still in full swing.

The sport, reliant on near-constant travel through international tours, has found ways to survive the pandemic, albeit with difficulty. Teams such as Sri Lanka, Pakistan, and the West Indies have spent a significant portion of the last 18 months in varying levels of government protocols and bio-secure bubbles; with players notably struggling with restrictions, match-intensity, and mental wellbeing – all with the backdrop of being away from their families with Covid 19 in their home and host countries.

Still, the logistical complexities of organizing a safe 16 team tournament during the pandemic were obvious, with no ICC tournament having been played since the 2020 Women’s T20 World Cup, which concluded shortly before the virus went global. With the second wave of the virus ravaging India, the ICC made the decision to move the tournament to the United Arab Emirates and Oman, a first for both countries, with India remaining competition hosts. 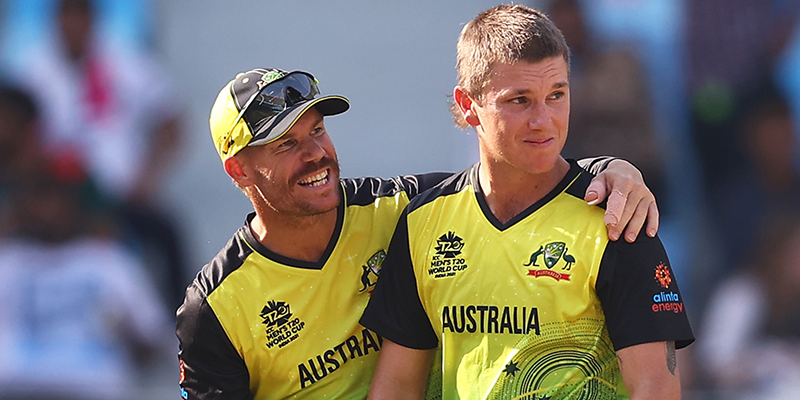 A confluence of unfortunate Covid-related events meant that instead of a World Cup in India or Australia, the competition would be played solely in two emerging cricketing nations for the first time, setting an appropriate stage for the nature of this T20 World Cup.

The competition began with 8 teams, playing the first round. Sri Lanka and Bangladesh, who failed to automatically qualify for the competition, played with the qualifying countries of Scotland, Ireland, Oman, Papa New Guinea, and Namibia and the Netherlands to narrow down the 16 sides for the Super 12 stage.

With Bangladesh, Sri Lanka, Scotland and Namibia proceeding to the group stage, the competition kicked off with Australia beating South Africa in a tight match, followed by the long-anticipated meeting of Pakistan and India ending in a 10 wicket thumping, marking a tournament of two games – a tight finish or a trouncing. Pakistan’s resounding victory against India, a first in an ICC World Cup, had widespread ramifications other than giving Pakistan the impetus for the only unbeaten run of the tournament; the game may have directly contributed to the shock of the tournament – India, pre-tournament favourites for many, never recovered after Shaheen Shah and co ran through their batting line up.

Their energy and body language visibly shaken after playing Pakistan, India’s batting planted their feet, failed to use their crease, and essentially forgot all the rules of T20 batting against New Zealand, with technically adept batsmen getting out to half-trackers, finding themselves caught on the bigger boundaries of Dubai, thereby all but sealing their own fates in the tournament and necessitating 1.3 billion Indian cricket fans to hope that Afghanistan, Namibia, or Scotland might trip up New Zealand to keep India’s hopes of qualification alive.

Still nursing the hangover of the IPL, under intense scrutiny from aggressive elements of Indian media, and battling questions as to the squad selection, India found themselves failing to progress past the group stage. 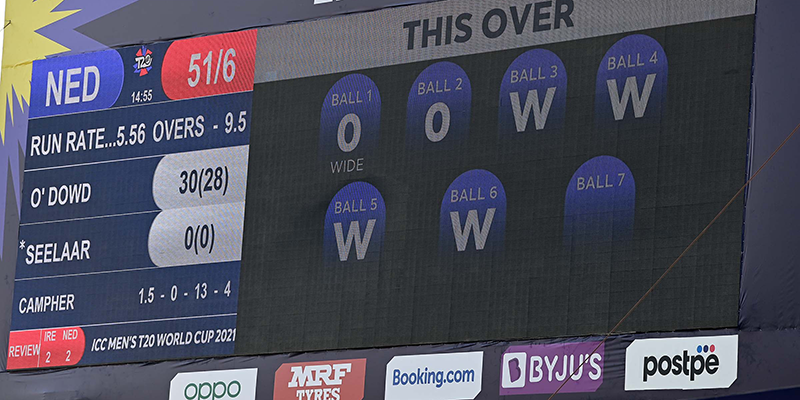 Pakistan’s bowling, acclimatized to the UAE conditions through years of cricket displacement and the PSL, has historically been their strength, and match-winning spells from Shaheen Shah and Haris Rauf have been vitally supported by the spinners throughout the tournament.

With Babar and Rizwan’s continued dominance making them the number one and number five top run scorers of the competition thus far, and Pakistan’s middle order registering the highest average, scoring rate, balls per six ratio and balls per boundary ratio of the Super 12 stage, the side has showed the class expected of their second place ICC ranking in the format in the competition.

The Pakistan side’s unity and teamwork in their collective goal has been one of the highlights of the tournament, and their batting strategy of keeping wickets in hand in the power play has been assisted by the timing of Asif Ali’s form to prove stable and successful in UAE conditions.

New Zealand’s road to the knockouts was barely more meandering than Pakistan’s. Save for their single loss to Pakistan where they always remained competitive, New Zealand’s four-win run had the hallmarks of the consistency, patience, and professionalism the Kiwi’s are known for. Their last-minute batting line-up, featuring Daryll Mitchell opening the batting for the first time, earned the surprise of many analysts but has certainly paid off for the Blackcaps, alleviating run-rate pressure from the middle order accumulators of Kane Williamson and Devon Conway, and allowing for late acceleration with wickets in hand from Glenn Phillips and Jimmy Neesham.

New Zealand’s bowlers, one of the more notable pace attacks in the competition, have been on brand despite the loss of Lockie Ferguson to injury, with New Zealand bucking their ‘nice guy’ reputation by restricting extras either bowling or in the field. Their strength remains their consistency, stable strategy, and arguably the best captaincy in the cricketing world.

Group 1, however, went down to the wire, and with teams’ were being forced to wait for the conclusion of South Africa vs England to know their fates. With South Africa ending England’s then-unbeaten run in a thriller, their poor net run rate prevented them from progressing to the knockouts despite garnering an entertaining four wins, equalling England and Australia in points.

England’s large victory margins, beginning with their rapid 6 wicket win against the West Indies, and concluding with a 26 run win against Sri Lanka, ensured their placement at the top of the group with an almost insurmountable net run rate with the second qualifier, Australia. Flexing their muscles against the remains of the West Indies’ legacy team which set the format standard, England declared the passing of the T20 torch to the cricketing world.

While England have long been strong contenders for tournament favourites thanks to their white-ball innovation, prowess, and depth, standout performances including Jos Buttler scoring the first century of the tournament and Adil Rashid’s 4-2 against the West Indies showed England’s number 1 ranking is no artifice.

The loss of Jason Roy in the final match of the group stage has been a late spanner in the works for England’s trophy run, adding to the injury of England’s enforcer, Tymal Mills. How England seeks to mitigate the loss of Roy, whether through promoting Johnny Bairstow or Dawid Malan, or fielding Sam Billings or David Willey in Roy’s role, will prove instrumental to the final stages of their trophy run. England’s strengths remain their unmatched batting depth and powerful strikers, backed up by a well-balanced bowling line up.

Trailing behind England in net run rate are Australia, who managed victories against all sides except their Ashes rivals. Australia’s victories were considerably tighter than England’s, beginning with a 2 ball victory against South Africa. As the tournament progressed, Australia’s wins became more convincing, with big wins over Bangladesh and the West Indies after their capitulation to England. With the Semi Finals to come, the opening partnership of Finch and Warner have found form after a long absence from significance, adding a powerful strike rate in the powerplay. 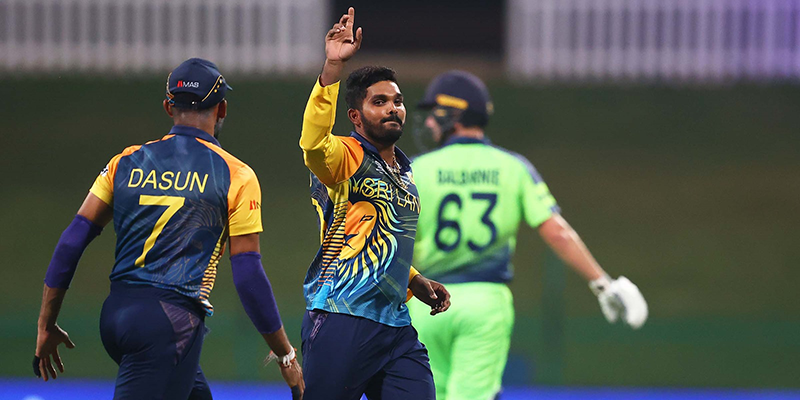 The addition of Mitchell Marsh has bulked up their batting after the glaring omission of Usman Khwaja, and their pace attack has assisted by Adam Zampa’s wrong’un in the middle overs.

While Australia’s road to the semi finals may not have had the dominating quality of Pakistan or England, Australian cricket has long found success from self-belief and confidence, and with Warner finding form right on cue, their self-belief could still see them through.

The group stage of the T20 World Cup has delivered a mix of everything – the Malinga special of four wickets in four deliveries from Curtis Campher; an intelligent, well-paced knock from Jos Butler; crushing defeats and final over finishes.

The tournament has provided us with The Good – with Shaheen Shah bowling the most exciting deliveries by a left armer since Wasim Akram dismissed Alam Lamb and Chris Lews in 1992; Asif Ali’s touch after a long-period of difficult form and personal battles; Asalanka and Hasaranga showing the world Sri Lanka’s exciting future after the retirement of stalwart Thisara Perrera, a poor run of form, and the Covid-related suspension of Danushka Gunathilaka, Kusal Mendis, and Niroshan Dickwella; and the wider cricketing world being introduced to a talented, ferocious selection of associate cricketers.

Along with the Good, the competition has thrown up its fair share of Bad – despite the World Cup being played in two associate countries, the current format failed to grow the game accordingly. The ICC has repeatedly earmarked the shortest format as its vehicle to expand the game. While 8 sides played in the first stage of the tournament, 2 of the qualifying slots were automatically granted to the Test nations of Bangladesh and Sri Lanka, who failed to automatically qualify for the Super 12s.

As such, the World Cup had no more than 2 emerging nations being given the ability to test their skills against the top sides, most of whom rarely, if ever, play associates in bilateral cricket. While a 20 team World Cup has been announced for 2024, the cricketing feast that was put on by players including Safyaan Sharif, George Munsey, Richie Berrington, Mark Watt, Garhaard Erasmus, Jan Frylinck and JJ Smit, indicates it couldn’t come soon enough. The tournament has been a foghorn declaring the end of an era, encapsulated best by the West Indies’ fate in the tournament. 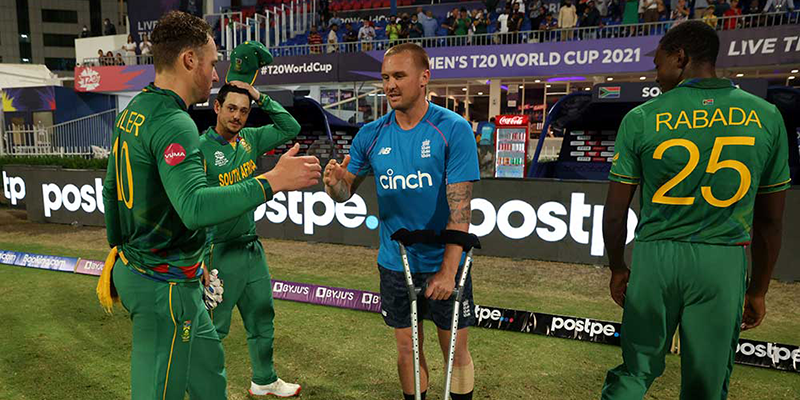 The West Indies came into the competition as defending champions, being the only side to have won the trophy twice. The wisdom established by the West Indies, that T20 cricket is decided by whoever hits the most sixes, proved outdated or ineffective in UAE conditions, particularly without the support of an incisive bowling side.

Likely to be the bittersweet send-off for T20 Goats Chris Gayle and DJ Bravo, 2021 may prove the start of a new era in the short, ever-developing format of T20.

Rounding out the Good and Bad of the competition is the Ugly. The tournament, never occurring in a vacuum, was marred early on by Quentin de Kock’s refusal to kneel in the wake of Cricket South Africa’s directive requiring all Proteas to adopt a consistent and united approach to racism. The issue was publicly resolved with Quentin de Kock’s apology, stating that the incident was a misunderstanding.

With the context of South Africa’s Social Justice & Nation Building hearings, it was evident that Cricket South Africa were attempting to address a long-standing discord between the Proteas’ approaches to anti-racism, an issue as culturally relevant to South Africa as anywhere.

Despite the mishandling of the de Kock incident, South Africa have showed glimmers of sheer brilliance in the tournament, with Bavuma coming into his stride as a captain under the most difficult of circumstances; Rassie van der Dussen’s intelligent innings-building toil paying dividends; Aiden Markram’s strike rate and energy painting a clear path of South Africa’s future; and Nortje announcing himself as a 90mph, economical superstar.

While this T20 tournament might have marked the end of the careers of the first generation of T20 legends, it has provided a clear path of the format’s future and the teams who will push our next generation of boundaries.

Tasneem-Summer Khan, is based in New Zealand, a cricket journalist, commentator, and analyst who has covered both international cricket and T20 tournaments across the world. She has worked with teams, broadcasters, and media to provide commentary and analysis, and has a special interest in Associate Cricket.