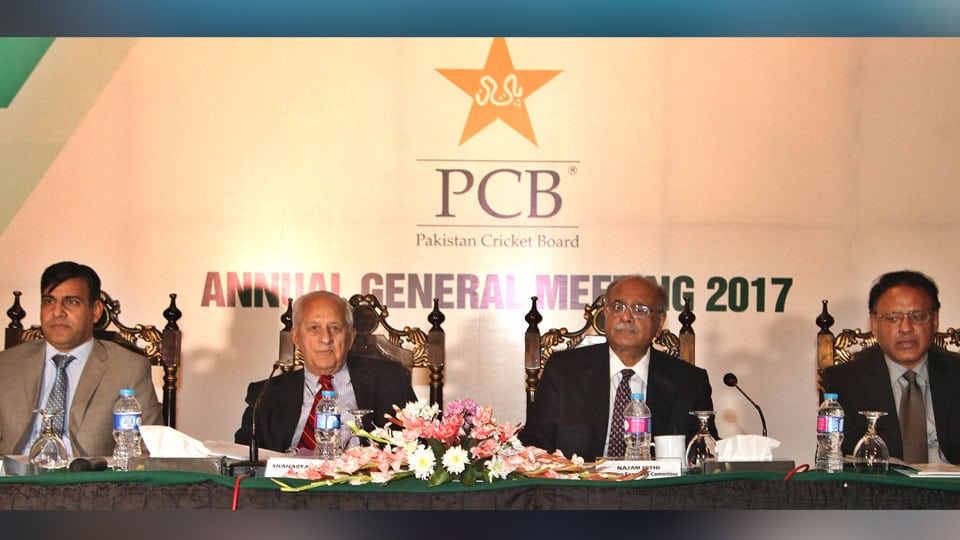 Exceptionally controversial Najam Sethi has exposed his designs to once again grab the top seat in the Pakistan Cricket Board. He was first nominated by the self-appointed Patron-in-Chief of the PCB but this time he has tried a unique and unprecedented trick for his self-projection and misused a non-political general body to exert pressure on the Patron who according to reports is not interested to give him an undue favour this time.

According to media reports the PCB general body unanimously passed a resolution supporting Sethi, incumbent chief of the executive committee, as the next chairman in place of Shaharyar Khan whose term is ending in August this year.

These pertinent questions require answers from the PCB management. The sycophants went even a step further when they also forwarded Sethi’s name for the Pride of Performance award for his significant contribution to Pakistan cricket especially staging of Pakistan Super League final in Lahore in March this year.

One can only laugh over significant contribution of Sethi to Pakistan cricket whose dubious past as a political wanderer is known to everyone. The nation and cricket lovers are eager to know Sethi’s contribution. It was he who helped Indian cricket board to form the Big Three in the ICC amid flimsy MoUs signed by the BCCI to play bilateral series with Pakistan.

Big Three was only eliminated after back door diplomacy of Shashank Manohar and Shaharyar. If according to Sethi the PSL has become a successful trademark of Pakistan cricket, then how he would respond to cricket lovers who term the PSL as Pakistan Satta League. What action has been taken against those cricketers who polluted the PSL? Where are those substantial proofs against the cricketers which Sethi had publically announced in February this year?

Staging of the PSL final in Lahore wasn’t a Sethi feat at all. Though the PCB had announced to stage the final in Lahore yet it was the Pakistan Army Show which provided unprecedented security to the foreign players. Sethi had no role in it.

Both the Punjab and Federal governments were nervous and indecisive. However, COAS’s statement that the Army would provide fool-proof security for the final eased their nervousness and they allowed the final to be played in Lahore. Sethi, however, tried to steal the show which was badly spoiled amid thunderous slogans of Go Nawaz Go during the final at the Gaddafi Stadium.

According to the dubious constitution of the PCB it is the Patron who appoints the Board chairman and general body has no business or authority to pass such a resolution. But Sethi has made yet another calculated move knowing that his chances to become the Chairman of the PCB are minute, managed the passage of a resolution from a body that consists of presidents of all 16 cricketing regions and district bodies of the country.

Through this highly controversial resolution Sethi and his cronies have tried to put pressure on the Patron who is facing a grave political crisis and whose fate depends on the findings of the JIT constituted by the Supreme Court.

Patron-in-Chief of the PCB has many valid reasons to spoil Sethi’s desire to become the chairman of the Board. Both Sethi and Shakeel are an essential part of a large Media Group.

Their presence in the PCB is a notorious CONFLICT OF INTEREST which Shaharyar Khan had never tolerated in his first term when he had forced mediocre former Test cricketer Ramiz Raja to choose between a PCB job of television commentary. Mr. Patron-in-Chief have some mercy on Pakistan cricket! Save Pakistan cricket from Sethi and his buddies!