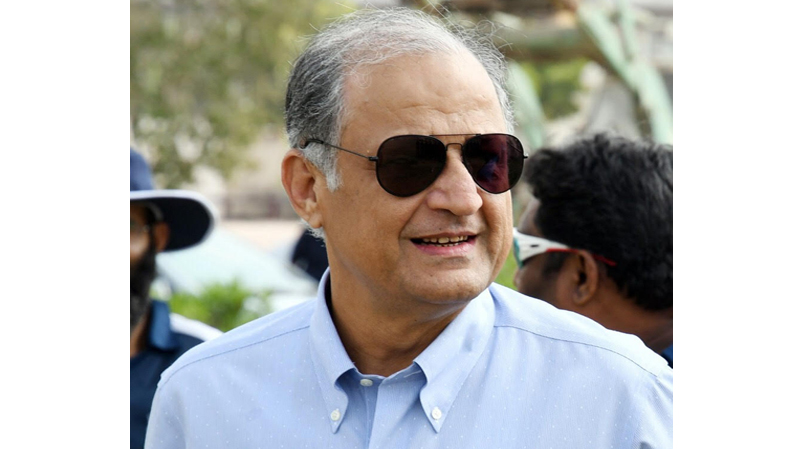 Since its infancy, Pakistan cricket has relied heavily on individual benefactors. Hanif Mohammad called them Patron Saints, and cited Mr. Kafiluddin of the Public Works Department. He put Hanif on his payroll as a teenaged “roads inspector” and his brother – aged 12 – as a “cement clerk.” With all respect to Mushtaq, I doubt if he has lifted a bag of cement in his life, or even counted one.

Compared to those pioneering days, Pakistan cricket is awash with money from sources then unknown, television and commercial sponsorship. But it still lives beyond its means and there is still a vital role for modern Patron Saints.

Nadeem Omar is one who has stepped up. His company, Omar Associates, is built on talc, the whitest and finest in the world, from deep mines in Khyber-Pakhtunkhwa. It has also supported thousands of Pakistan cricketers of all ages, some directly as players and employees, many more through a range of grassroots activities.

In November 2014 it came to the rescue of Pakistan’s hockey team. Apart from running a diverse business, Nadeem Omar played much cricket himself, had years of adventure as a merchant seaman and became a singer with an international following.

He was born in Karachi in 1957, the eldest of three children, but his life changed radically in early childhood when his family moved to Kaduna in northern Nigeria. His father worked there for four years as a consultant engineer on the construction of the local waterworks. “I think my father and I and my younger brother were the first people to play cricket in that part of Nigeria. We had some stumps and a bat made out of some ash wood – and that’s where my cricket bug started.”

He had another decisive experience in Nigeria. “My father had four LP records. They were all of K L Saigal. I listened to them all the time and sang all the songs, so did my father. “The first superstar of Indian cinema, Saigal died of alcoholism in 1947 aged only 42, but managed to perform nearly 200 songs in 142 films, most of them composed by Rai Chind Boral, the father of Indian film music. On returning to Pakistan, Nadeem Omar studied singing under a tutor.

Later he would assemble his own band and perform Saigal’s songs in public. He has given Saigal concerts and made recordings of his versions of the songs, and helped to bring Saigal back into fashion throughout the Indian sub-continent.

On return to Pakistan, Nadeem Omar went to Cantt public school in Karachi. It had nine cricket fields, more than any other school in Karachi, and was a well-known nursery for cricketers. Wasim Bari, Pakistan’s great wicketkeeper, was there a few years ahead of him. “My younger brother was in the first eleven, I was only in the second, but we both played and watched a lot of cricket.”

Aged 17 he resisted the idea of joining the family business and joined the Merchant Marine Academy. On graduation he joined the Pakistan National Shipping Corporation and visited most of the ports of the world.

In 1978, sailing from Gibraltar across the Atlantic he survived a terrifying storm which sank eight other ships. His own ship’s speed was reduced from its normal 22 knots to 3 knots. It took eighteen days instead of the usual seven or eight to reach the United States and had to be diverted to New York from Philadelphia.

“At sea, I dropped out of the cricket race, but we kept in touch with English county cricket scores and Test matches through our Radio Officer. He would have all the reports for us from the BBC. We heard about Majid Khan’s exploits for Glamorgan and all the other Pakistani cricketers in county cricket.”

When he finally left the merchant navy at 34 he was a chief officer and had a master’s certificate, although he never had his own ship. He was now ready to join the family firm, which was then focussed on construction and infrastructure projects. His interest in cricket revived and he began to play regular club cricket. He is modest about his achievements (“nothing very noticeable and just an ordinary off-spinner”) but he can eventually be persuaded to mention two centuries and a quickfire partnership against the renowned Karachi Gymkhana club which helped his team to score 274 in a 25-over match.

More importantly, he opened up a club initially called Pakistan CC which became the Omar Associates team. It has become a leading Patron’s team, especially successful in Ramadan T20 matches during the last many years.

Pakistan Super League is no doubt one of the brightest brands of the Pakistan Cricket Board and Quetta Gladiators – the reigning champions – are one of the most vibrant entities of the league.

Starting as the low-profile outfit, in terms of the price tag, the Gladiators made their presence felt in the inaugural PSL edition and eventually won the mega event in 2019. Along with the team combination, the camaraderie the leadership of Nadeem Omar is one of the key factors behind the success of the Quetta Gladiators.

The representative of the “ScoreLine” sat with the charismatic Nadeem Omar at his beautiful office in Karachi to talk about his decades old association with Cricket, the Quetta Gladiators’ journey and the vision for the future.

Nadeem Omar made the opening remarks, regarding the announcement of the entire PSL in Pakistan, in an exciting tone and said that this and the previous PCB regime along with security agencies deserve rich tribute for this major development.

“That was infact the initial aim of this mega tournament as well. The Pakistan Cricket Board’s regimes including that of Najam Sethi deserve applause for their role in gradually bringing the event to Pakistan. The vision was of Sethi which was taken forward by chairman Ehsan Mani and Wasim Khan, the CEO of the PCB. I would like to pay rich tribute to our security forces as well because their commitment, dedication and flawless execution led to the trust of foreigners in Pakistan”, Nadeem Omar said.

Nadeem was of the opinion that presence of renowned foreign players would attract large number of crowd which was the missing element in the United Arab Emirates (UAE).

“The PSL is probably the number one brand in terms of quality and after coming home, the PSL will going to go places”, Nadeem Omar hoped.

The owner of the reigning PSL champions shared that foreign players and staff of his franchise rate PSL as the top brand in terms of quality.

“We have Shane Watson and earlier had Kevin Peterson who said in terms of quality of players and competiveness, the PSL is the top league in the world. Especially people speak highly of the bowling talent in the event where you can easily find 5-6 very good bowlers in every outfit to make life difficult for batsmen”, Nadeem Omar said.

“In terms of cricket value, I think Pakistan Super League is number one in the world”, Nadeem Omar stressed.

On the growth of Quetta Gladiators, as a brand, the soft-spoken owner recalled that in terms of the price-tag, there was no comparison with Karachi, Lahore or Islamabad but the team-work and the camaraderie led them to success.

“The cohesion of Moin Khan, Azam Khan, Nabeel Hashmi did wonders. They are the core of Quetta Gladiators and have been together for three decades.

Moin Khan as a coch is superb but in this format it’s about team management. Sarfaraz Ahmed too handles players very well.”  Nadeem Omar said.

Nadeem Omar sounded relived on mentioning the fact that foreign players were willing to tour Pakistan for the PSL, saying that his outfit had suffered because of their refusal in the past.

“Who better than Quetta Gladiators would understand the importance of foreign players’ presence in the team till the end as twice, we suffered due to non-availability of foreign players for the finals but last year the scenario was different. Even if four important players of a club team don’t show up the combination suffers”, Nadeem Omar said.

“Quetta are excited to defend the crown with a formidable bunch of players including one of the finest T20 players Jason Roy who will be part of Gladiators this season, so we are looking forward to defending the PSL title”, the owner said.

Nadeem Omar also lauded the contribution of Sir Vivian Richards and terms him one of the biggest ambassadors of PSL.

“I think there is no bigger cricketer than Sir Viv, he played ahead of his time. The way he played his cricket with a big heart I think not just Quetta but Pakistan team need him. He is a motivator like none other and I would urge players from other franchises as well to spend time with him”, Nadeem Omar said.

“I think Viv is the one of the major factors along with Darren Sammy to lift up the PSL. I thank them and other West Indian players for their support”, Nadeem Omar said.