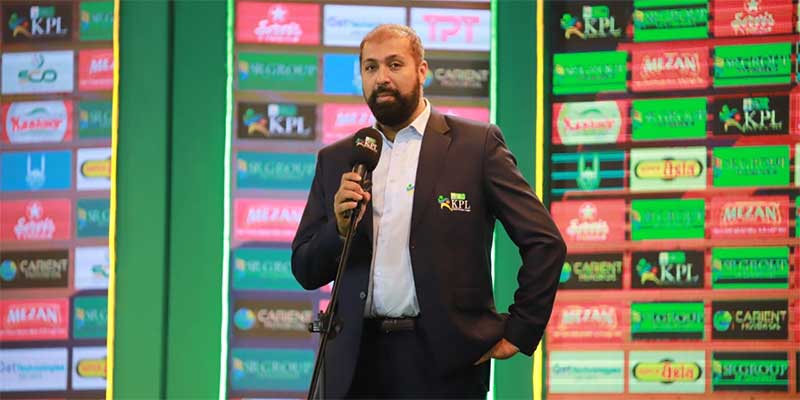 Muzaffarabad: Pakistan is on a tour of West Indies where they are going to play 2 Test matches against the Carribeans, but it looks as if Pakistanis have forgotten about them as everyone is talking about Kashmir Premier League (KPL) that has become the hottest topic in South Asia after BCCI threatened international players from participating in KPL 2021.

The league has set a record of the most viewership in Pakistan and it is supposed to become a vital opportunity for the players of Azad Kashmir to showcase their talent at the international level.

In an interview with the Director Cricket Operations KPL, Taimur Khan, we discussed about almost everything from the draft of KPL to its start and the severe challenges, issues, positive aspects and the success it has gained in a very short period of time.

Talking about KPL, Taimur said, “As it was a first experiment and there were new people, there were some operational issues as well that caused some mistakes and errors but now it is the time to improve it as a Cricket League.”

While talking about the scenario prior to the start of the tournament, he criticised BCCI, “They violated the spirit of the game and brought politics into sport that was against the interests of the youth of the people of Azad Kashmir who are very happy regarding KPL.

Now they are playing cricket and will let the world know their names through their wonderful performances.”

He said they tried their best to bring cricket in Azad Kashmir, “We decided to held KPL in Azad Kashmir, wanted to provide the youth of Kashmir a platform where they would showcase their talent.

We succeeded by the grace of Almighty and now every franchise team has at least 5 Kashmiri players and there is a law that at least 2 of them must play in the final XI.

We call it a global league now as it has broken all the viewership records and the success it has achieved is sometimes impossible for the bigger leagues even.

There are plenty of rumors going on regarding the future of KPL but let me tell you that none of them is true.
We have a 13 year contract with the Muzaffarabad Cricket Stadium and we have been issued one year’s NOC by the PCB that can be extended. We are working in accordance with the guidelines of PCB so NOC will be extended.”

Taimur Khan doesn’t want to rely on KPL only. Rather, he wants to establish 3 cricket academies in Muzaffarabad, Mirpur and Bagh where players must be given proper training as per the requirements of International cricket. He wants to bring qualified coaching staff from round the world in these academies. He said, “We want a Development League in this region that would make a team of the academy, players could be drafted from that team in KPL franchises.”

In his view, KPL will promote cricket in AJK as well as it would bring economic prosperity in the conflicted region. He said, “On one hand, there are cricket grounds being redeveloped while on the other hand, tourism industry will boom in AJK due to the tournaments like KPL. Hotels will also improve.

So, I think it’s not about cricket only rather economic prosperity of AJK has also been linked with KPL.”