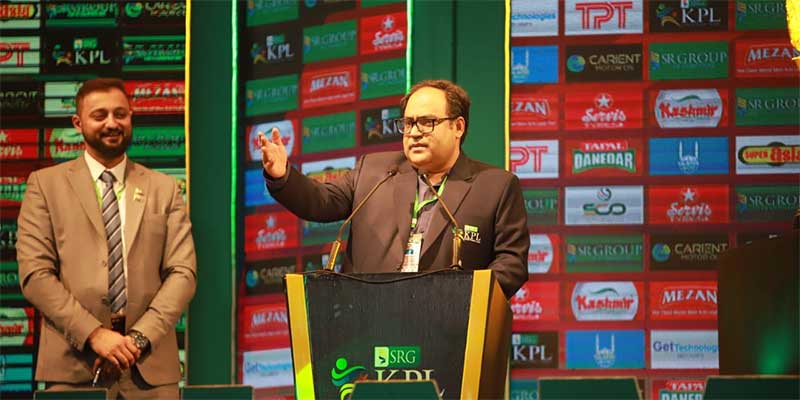 Muzaffarabad: The first edition of Kashmir Premier League ended on 17th August with a victory for Rawalakot Hawks in the final game.

After the final, President of Kashmir Premier League, Arif Malik, came up with important announcements in his speech where he said, “KPL was a minor effort of our management that has become a brand in no time as a big audience in more than 50 countries watched the tournament this year.”

In his address, the President of SRG KPL came up with 3 important announcements that are really important for the youth of Kashmir and the cricket of the region; The 7th team in KPL named as Jammu Janbaz will be part of KPL from next season, KPL management will conduct another tournament for the youth of Kashmir named as “Kashmir T20” within the next 2 or 3 months and an International cricket academy will be established in the Kashmir region.

“In the first edition of KPL, there were 5 players in each franchise but now we are going to launch Kashmir T20 for the youth of Kashmir that will be started within the next two or three months.”

Kashmir T20 will be a tournament of Kashmiri youngsters and Arif Malik wants the brand ambassador of KPL, Shahid Afridi, to provide each team of Kashmir T20 a mentor as well who would play alongside young players and help them improve their game.
He further said, “The way KPL was broadcasted, the matches of Kashmir T20 will also be aired in the same way.

The players emerging from Kashmir T20 will be included in the draft of KPL. The remaining details will also be shared soon.”

He was pleased with the success KPL has achieved in its inaugural edition, “The tournament has ended and it achieved a lot of success. The credit goes to all the stakeholders, especially the 6 franchises involved in the tournament. They played fantastic cricket and fans witness really amazing games.

From the next season, Jammu Janbaz will also compete in the tournament as the 7th team of SRG KPL.”