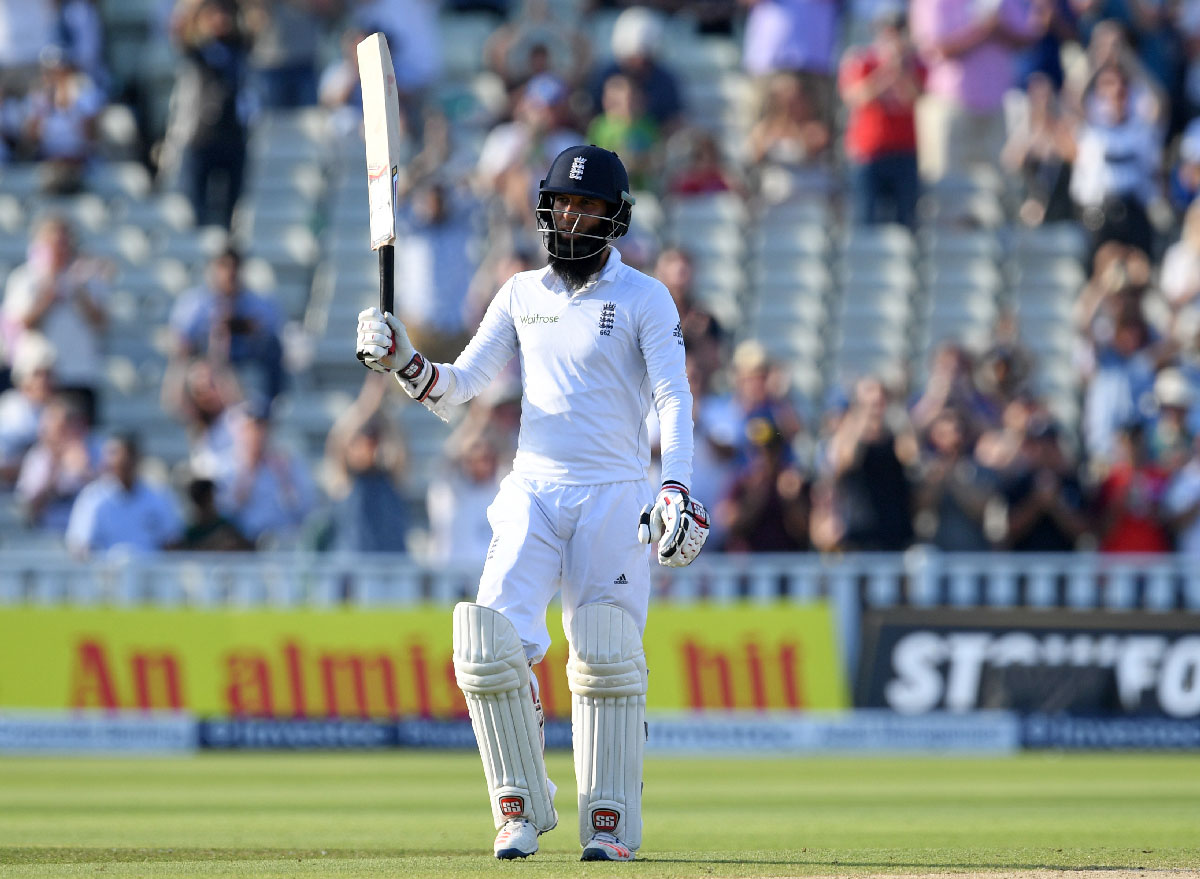 The Saturday dawned bright and sunny and warm and stayed that way throughout. This fourth day was going to be the turning point of this match.

I have never heard any commentator or expert or analyst say that a certain session of a Test is not important or crucial. These are clichés employed by those covering the game. The Edgbaston Test between Pakistan and England has been fascinating with the balance shifting from side to the other.

Pakistan were in charge for the first two days before England pulled back the initiative claiming eight Pakistan wickets and then letting Cook and Hales get away to a crackling start of 120 in 35 overs. 17 runs ahead with all their second innings wickets intact.

It is reported that the Pakistani players particularly Sohail Khan (wonder why? Maybe that he is over generous with overstepping and conceding too many no balls) were given a “dressing down” by an irate Head Coach Mickey Arthur.

This may have resulted with Pakistan approaching the fourth day with renewed determination and fresh resolve. They got rid of the troublesome opening pair of Cook and Hales in double quick time.

A brilliant running catch by Yasir off Amir at point to dismiss Hales and a safe catch by Younis off Sohail Khan to send back the England captain meant that in about five overs and under half an hour’s play England were 126 for 2 starting at the overnight 120 for no loss.

The overall lead was only 23. Pakistan had a new spring in their step but Joe Root and James Vince were equal to the task of dealing with the pacemen and Yasir Shah.

Root was fortunate and Rahat and Pakistan unlucky and unhappy when an edge was dropped by the usually safe Mohammad Hafeez in the 57th over about half an hour before lunch. Root was in his twenties and this lapse may cost Pakistan dearly. Root himself had been guilty of dropping Azhar Ali when he was on 39 and Azhar went on to add another 100 runs.

Earlier there was a “funny” moment when a lady spectator climbed up the stairs right in front of the  sight screen and was stranded there not knowing how to exit. Play was held up for about 3 or 4 minutes. Hopefully the referee took this into account when calculating the over rate for the day. The stewards perhaps were having an early lunch and the spectator eluded their vigilance. Eventually she climbed down the stairs and disappeared into the crowd.

Things were even steven at lunch when England went to lunch at 183 for 3 with Root and Vince unseparated. Both had negotiated the Pakistan bowling well and though they went about their task slowly but surely. A lead of 80. Pakistan had pulled the advantage back.

Pakistan succeeded in getting a couple of wickets between lunch and tea while England added 79 for the loss of their pre lunch pair of Root and Vince. Root was set up by Misbah and Yasir. He was bent on sweeping the leg spinner who was pitching on or about the leg stump. Misbah placed Hafeez at fine leg – halfway 45 degrees and soon Root obliged by top edging one to Hafeez who has such catches for breakfast. The No. 3 was gone for 62 and England were 221 for 3.

The partnership for the 3rd wicket had produced a most valuable 95. This by the way was the first time since 200 (vs Sri Lanka) that the top three England batsmen had all got half centuries at home and the 6th instance ever.

The new ball was taken after 82.4 overs and paid immediate dividend when Vince trying a drive edged to Younis who gobbled it with glee. England survived till tea when Ballance and Bairstow took them to 262 for 4 in 26 overs .79 runs had been added in the 26 overs between lunch and tea  A lead of 159. The 36 overs between tea and end were the decider. England wanted to get as many as possible and as speedily as possible. Pakistan wanted to skittle them out so that they get a modest target to take an unassailable 2-1 lead.

40 minutes after tea Ballance fell to a clever piece of captaincy and strategy. Yasir operated round the wicket and Misbah placed Asad Shafiq at leg slip. Ballance glanced one from outside his off stump to leg slip. Asad accepted the chance with gratitude and England were 282 with half their wickets gone. The lead 179.

Johnny Bairstow and Moeen Ali continued to battle their way from there onwards; they even accelerated the rate of scoring. And they were still there when stumps were drawn for the day. They had clattered away at the tiring Pakistan attack. They have put on a match saving partnership and maybe a match winning partnership of 132 for the unbroken 6th wicket.

Bairstow was 82 scored at 66.66 percent and Moeen was 71 at a strike rate of 71.42. At 414 for 5 England have a lead of 311. England’s innings was played in two contrasting parts. The last 36 overs saw them score 152 for 1 wicket while the previous 54 yielded 142 for 4 wickets. England have done very well but will they go for a win? Alastair Cook is a cautious. Will he declare overnight and give Pakistan a target of 312. It has been seldom done and the task seems beyond the current Pakistan batting. Cook may bat on for another 30 minutes or an hour and remove the carrot completely out of Pakistan’s sight.

Should he give Bairstow the opportunity of scoring those 18 runs the wicketkeeper requires to get a century or give Moeen Ali the chance of getting the 29 he wants for his 100? Had he intentions of declaring today he would have sent a message to Bairstow and Moeen to that effect.

Instead of speeding up the rate of scoring which they at one time were doing at almost 6 an over towards the end they slowed down. Five half centurions had served England’s fight back well.

Pakistan were defensive. The field place was a testimony to this. They wanted to contain England rather than bowl them out. No “out of the box” strategies were evident. Mickey Arthur may once again be displeased. Sohail Khan (1/102) was blunted today and has bowled too many no ball for comfort (what are the battery of coaches and officials doing? Being angry and expressing displeasure will not cure this). The Head Coach does have a school master approach and probably the “boys” require a pep talk before and after every session. He did try that with the Australians with not terribly good results. Amir bowled economically without looking dangerous (2/73) or being capable of running through a determined batting line up.Yasir the Lord of Lord’s has been worked out and today he was not as lethal as expected (2/152). Misbah was cool calm collected and unruffled without being imaginative.

Neither captain seemed in a mood of taking risks and we may see this hitherto exciting ding dong battle fizzling out into a draw. The first two days belonged to Pakistan. The next two to England. The fifth and decider is to come on Sunday. The weather it seems will not intervene. Today it was warm and sunny and likely to remain so.

Edgbaston ground’ capacity is 25,000. 14000 tickets had been sold for the day which was much less than expected. The weather has improved over the last couple of days; it is now sunnier and warmer. No rain threatening clouds or the gusty blustery cool winds. It is hoped that as the match enters a crucial (there I go again!!) stage we will have a full stadium for the Sunday. Moreover the organisers have reduced the price of tickets for Sunday to 16 GBP for Adults and 5 GBP for Under 16s.

Every ground has a special part in it which becomes popular like the “hill” in Sydney. Here in Edgbaston it is the Eric Hollies Stand. It is the best place to watch the cricket from. It is loud; lively; and in some sections of this stand spectators in “fancy dress” can be seen. Some days they are dressed in bright yellow as ducks, some as sheep, some even like lobsters and prawns, and others as traffic cones! It can get a bit rowdy as the day goes on and the food and drink start to take affect!!

The stand is named after Eric Hollies who played for Warwickshire for a quarter of a century. He played 13 Tests for England taking 44 wickets. His name entered the history books because he was the bowler who clean bowled Donald Bradman for a golden duck in the Don’s last Test innings at the Oval in 1948.

This was the Test which Australia won by an innings after Lindwall and company had dismissed England for a mere 52 in the first innings; only Len Hutton got into double figures scoring 30. Arthur Morris with 196 put Australia firmly on the road to victory. His opening stand with Barnes was worth 117. Then after  Barnes in came Bradman; given a caps doffed three cheers by the England team ; was promptly bowled by Hollies and ended his Test career with an average of just a fraction of 100 per innings. Hollies the spoiler!! But that stand in Edgbaston has a lot of character and entertainment. It is they say to watch cricket from at this ground.

The day was special and significant because the Pride of Pakistan now a British national and resident in Birmingham the youngest Nobel Laureate in history the teenager Malala Yusufzai was among the VIP spectators at the special invitation of the Chairman of the PCB Shahryar Khan.

No need to answer Cook’s attack on Amir

PCB must rethink its decisions