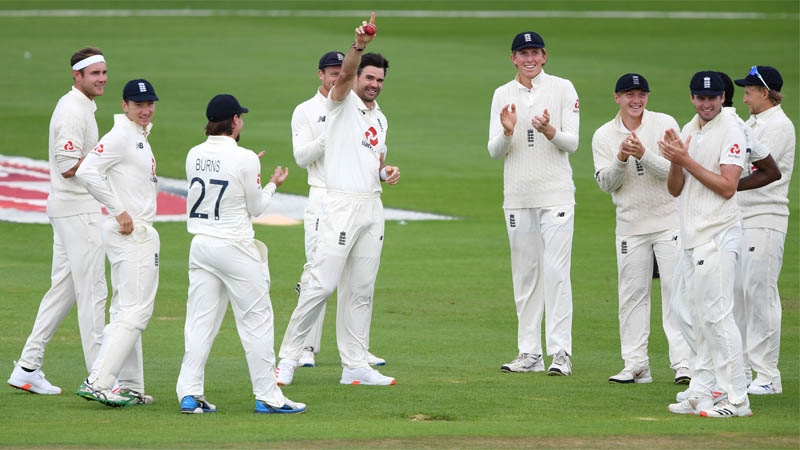 Weather too has a sense of occasion. After hours of frustration, rain held up at Southampton just in time to allow the unfolding of a defining moment in history.

In the sixth over of the truncated final day at Southampton, James Anderson pitched one just short of length, on perfect line, and moved it away. Azhar Ali, not a bad man as one’s landmark scalp, was surprised by the bounce. The ball took the shoulder of the bat and flew to Joe Root at first slip. Anderson exulted, the players celebrated, social media exploded.

Yes, we all know that.

English media has made more noise about it—from build-up, to the moment, to the aftermath—to make it sound like the greatest accomplishment since the Normandy landings.
But then, one cannot really complain. There is a bit of jingoism associated with every sporting celebration.

Besides, in a season deprived of action in the way 2020 has been, every little bit of news has to be stretched, to paper over the empty inches and the silent sound bites.
And to be fair this was a magnificent achievement, worthy of much of the accolades.

Now that it is done, let us look back once more, but now with a certain degree of objectivity.

Certainly, being the first pace bowler to achieve the feat speaks a lot about both the rarity as well as the difficulties associated with the feat.

Anderson had to play 156 Test matches. To remain fit enough to do so, and go on bowling at his best when he is 38 is a tribute to his sustained excellence.

And if we look closely at Anderson’s career, we find that he has improved rather remarkably down the years.

In fact, first impression does leave a lasting impact in the game, especially in the minds of the critics. In that respect, the first six years of his career, when his bowling average hovered around 35, did a lot to create the feeling that this hardworking bowler was less than the very good ones.

Even when he improved through the next half-decade or so, most were quick to slot him in the category just a notch lower than the very best in business.

Perhaps much of that was justified.

But we have to say that from the summer of 2014, Anderson has been nothing less than phenomenal.

257 wickets in 64 Tests at an average of 21.61 means that his career graph has been shooting up, ushering him steadily into the select club of greats.

To view these last few years in some perspective, let me point out that in his entire career Fred Trueman, generally acknowledged to be the greatest fast bowler of England (certainly after the Second World War), captured 307 wickets in 67 Tests at 21.57. We look at the last six years of Anderson’s career, and find it very very comparable. Hence, for the last six years he has been as good as the greatest bowler of England, and he has done that after spending a decade or so as a genuinely good bowler.

Anderson has thereby hauled his bowling average from 30.67 at the end of the 2013-14 season to 26.79 as it stands now. It is perhaps less than great, but is considerably better than bowlers spoken with an awe associated with greatness—such as Jeff Thomson and Ian Botham. Which underlines that first impressions are very important in creating the lasting image a cricketer.

We also have to add that, unlike Kapil Dev or Imran Khan, Anderson’s workload has not reduced with age. It has remained a steady 19-20 overs an innings. Which once again highlights his fitness and longevity.

There do remain certain gaps in his record.

While 384 wickets at 23.83 marks him out as a giant in England, his numbers elsewhere have been erratic at best. Australia has been more miss than hit, bowling in India has always been a tedious affair, and his last few trips to the subcontinent show that, unlike his general career, this aspect has not really improved with time. He has definitely not been an all-wicket bowler, and that can justifiably be held against him.

And finally, incredible though his 600-wicket feat as a pace-bowler is, perhaps we have gone a trifle overboard—helped no doubt by the media—to brand it as a near-impossible achievement.

Much of cricket is governed by opportunities. And Anderson has been helped by the opportunities that have come his way.

We must remember than England play way more Test matches than any other country.
Just to put this in perspective, let me illustrate this with numbers.

So, Anderson has missed 68 Test matches as well. Through his 17 years in international cricket, he played 69.64% of the possible Test matches.

Now let us look at two fast bowlers, both rather faster than him, who had similar long careers.

But West Indies played just 142 Tests in this period. In the same span, England played 173, Australia 170.

Given Walsh ended with 519 wickets, we can perhaps estimate how much he would have got if West Indies had played 173 Tests like England.

Walsh, considering the same fitness level, would have played 161. We can estimate that 161 Tests would have seen him finish with 633 wickets.

Richard Hadlee played for 17 years as well, from 1973 to 1990. He played 86 Tests of the 100 New Zealand contested during that period. That is again testimony to better fitness levels.

Now if New Zealand had played 183 Tests like England, we can assume Hadlee would have played 86% of them, that is 157 Tests. And given he captured 434 wickets in 86 Tests, his estimated tally would have been 792!

So yes, Anderson has been a fantastic bowler, with spectacular sustained excellence and constant improvement down the years. He demonstrated admirable fitness levels. His record overseas is perhaps not that unimpressive, but he is a bona fide great at home.

However, we can perhaps temper the celebrations a wee bit considering the amount to which his cause has been helped by the enormous number of Tests played by England.

Arunabha Sengupta is the author of Apartheid: A Point to Cover — South African Cricket 1948-70 and the Stop The Seventy Tour Campaign.