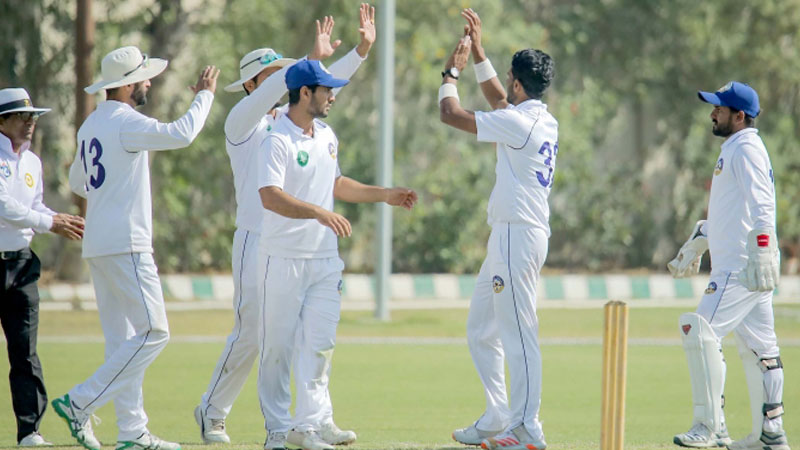 Karachi: On the third day of the eighth round of the Quaid-e-Azam trophy, Central Punjab beat Balochistan by nine wickets to bag third consecutive win, Khyber Pakhtunkhwa decimated Southern Punjab by 10 wickets. Northern in trouble against Sindh with 185-run deficit.

At the State Bank stadium, Balochistan gave 47 runs target to Central Punjab which was easily overhauled on one wicket. Ali Zaryab (22) and Usman Salahuddin (nine) remained not-out. Muhammad Akhlaq was picked up by Raza Hasan on 10. Central Punjab piled up 369 runs in the first innings.

Earlier Balochistan restarted the second innings, on the third day, from 130-6 and the whole team were bundled out on 285 (with 46 runs lead). Overnight batsmen Umaid Asif and Jalat Khan knitted a brilliant 138-run stand but could not pull out their team off the hook. They scored 69 and 65 respectively.

KP had just four runs to chase which were scored without loss.

On the third day, Southern Punjab were followed-on and reduced to 200 runs in the second innings after just three runs lead.

At the National Stadium, Northern are in trouble against Sindh after scoring 126 for the loss of four wickets at the end of the third day’s play. Northern are still under 185-run deficit. Hammad Azam and Mubassir Khan are unbeaten on 25 and one run respectively.

Azizullah, Shahnawaz Dhani and Abrar Ahmed have had one wicket each.