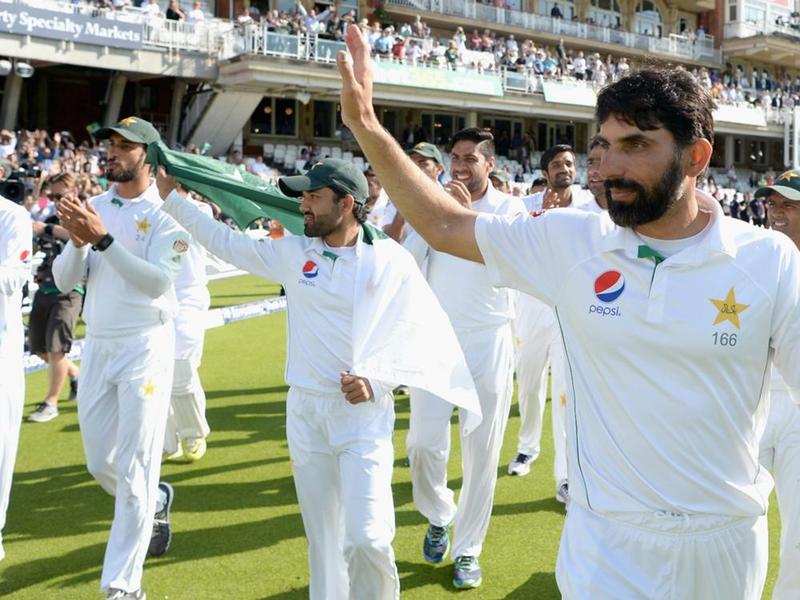 With rain preventing any significant play at Port of Spain, Pakistan has become the number 1 ranked Test side in the world. Although, the tag of “the best in the world” needs no additives to make it sweeter but in case of Pakistan, the rarity of this occurrence is what magnifies the significance of this feat for the Pakistan Cricket and its fans.

It is the first time for Pakistan to stand as officially the best Test side in the world since the introduction of ICC official ranking in 2003. During this period of just over 13 years, only four teams have claimed the custody of that MACE and not surprisingly, Australians held it (83 months) longer than everyone else combined (76 months). 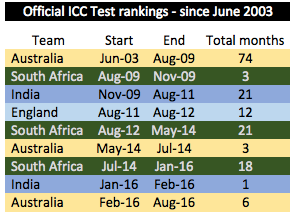 But Test Cricket has been around since much earlier than 2003, in fact, till mid 70s – before the start of ODI World Cups – Test Cricket was the only format of Cricket to gauge the brilliance of Cricketing nations. Naturally, other teams also feared better than the rest during that pre-2003 era and it may look harsh not to acknowledge the teams who performed the best in that era, especially the West Indies of late 70s and 80s. Additionally, it also helps in bench marking the performance of leading sides of last two decades with that of teams of previous decades and century.

To address the same thought, ICC did apply its current rating system, some years ago, to results since 1952 providing ratings for the end of each month back to 1952. 1952 was chosen as the starting point as prior to this date, the number of competing Test teams was small and the frequency of matches was quite low as well. The information used to be available on ICC official website till few years ago but it is not available there any more. Fortunately, found that table in one of the archives that looks like this: 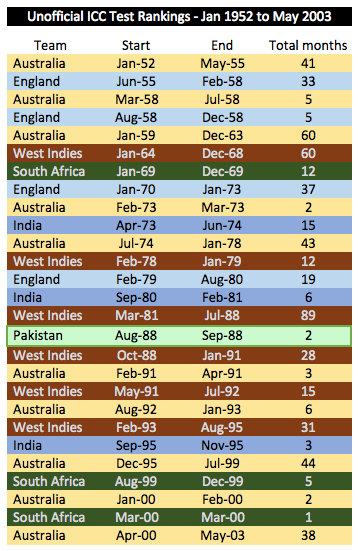 This retrospective listing shows that although Pakistan has claimed the MACE for the first time in its history but, had the ICC Test Rankings were in place since Pakistan started playing Test Cricket, it would not have been the first time. Pakistan would have claimed it earlier as well, though only for a brief period of 2 months – from August 1988 to September 1988.

Both of these listings also provide a good opportunity to measure the share of dominance of different teams in the last 64 years (since 1952). In case all the months (in which a team remained number 1 in Tests) are added together, it gives a good measure of the period of dominance of specific teams. 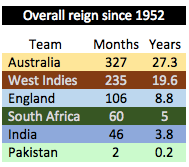 This concluding picture highlights the significance of ‘Number 1 Test Team’ tag for Pakistan. For Australia, losing the MACE may not be as significant as it is for Pakistan to get hold of it. After remaining acknowledged as one of the most competitive sides in the Test Cricket Arena since admission to it, the title of ‘The Best Test team in the world’ has eluded Pakistan for a long time. Admiring and seeing the talent and excellence of their players getting admired by others as well, Pakistani fans have longed for it for too long. So long, that it has almost become a life long wish for quite a few fans.

Finally, the wait is over and Pakistan is crowned the new holder of the throne. That MACE is Pakistan’s to hold, at least for some time and celebrations have just begun.To make it all even more prestigious, who better to receive that MACE than Misbah-ul-Haq – the rightful custodian of the MACE – without whose custody of the Team Pakistan, it would have self-destructed itself yet another time before achieving this feat. Well done Misbah, Well done Team Pakistan.

The writer is a Cricket enthusiast who dispenses his thoughts on www.fb.com/krick3r and tweets @krick3r