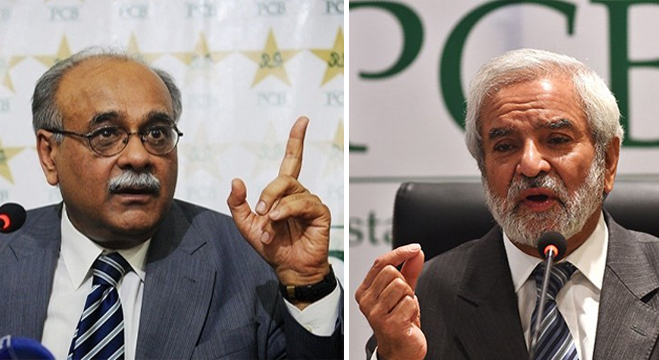 Last month the PCB uploaded a statement on its website which claimed that outgoing chairman Najam Aziz Sethi received an enormous amount of over Rs. 14 million as PSL allowance during his tenure in the Board.

Sethi sent a legal notice to PCB Chairman Ehsan Mani in which he had claimed that he did not take the amount of Rs. 14,181,570 as allowance for being the Pakistan Super League (PSL) chairman as is mentioned in his account in the financial sheet issued by the PCB.

The PCB also admitted in its reply that Sethi did not take the amount but as it was approved, it had been mentioned in his accounts. Very funny! The PCB reply further irked Sethi and he has threatened to go to the court.

Apparently it looked that the PCB Chairman Ehsan Mani and Chariya famed Najam Sethi would engage in war of words and amaze cricket fans amidst more startling revelation. However, after going through the reply of the PCB, there is every reason to believe that Sethi’s legal notice to Mani has forced him to go on the back foot. Abject surrender!

Receiving allowances is a normal and legal routine in every public and private department and the PCB is no exception. Sethi also didn’t deny receiving any amount but contradicted the figures in his legal notice and asserted that all of those allowances/payments were duly authorized and approved by the PCB’s Board of Governors. This is the procedure. In the same breath Sethi also counter attacked Mani and alleged that he has been provided a furnished apartment by the Board — which negates his (Mani) claim that he is not getting and accommodation allowance.

Sethi in a statement also revealed that there is a Mafia in the PCB and the purpose to release such figures was to malign him, presumably at the behest of Imran Khan. The Score Line has been vehemently exposing the PCB Mafia even when Sethi was at the helm in the Board. He patronized and looked after the same Mafia.

There was almost no sports journalist across the country, particularly in Lahore and Karachi, who missed Sethi’s bounties. All enjoyed UAE trips in groups. So Mr. Sethi you was having a good time at the PCB. I wonder that he never noticed the Mafia then but soon after quitting the PCB he suddenly realized its existence.

Sethi promoted and looked after the same Mafia in the PCB and he was not naïve to understand one very simple but harsh reality that ‘once you are out nobody cares about you’. All those whom Sethi protected and patronized, immediately switched their loyalties and submitted before the new boss.

Perhaps Sethi was swayed away by Mani’s statement in the media in which he had lauded his (Sethi) services for cricket in Pakistan soon after assuming his new role in the PCB. He forgot that Mani was an audit wizard, a man of Imran Khan and he had to please the Patron-in-Chief through such mean doings. So he chose a non-issue to hurt his predecessor.

Nevertheless, there was no need for PCB to public allowances received by Sethi. He is right to protest that why he was singled out and why names of two-faced Subhan Ahmed and other members of the executive committee were not appeared on the PCB website.

It was the first instance that a sitting chairman officially leaked allowances received by his predecessor to media. As you sow so shall you reap! Tomorrow it will be you whose perks would be loaded. Mr. Mani you have set a bad example!