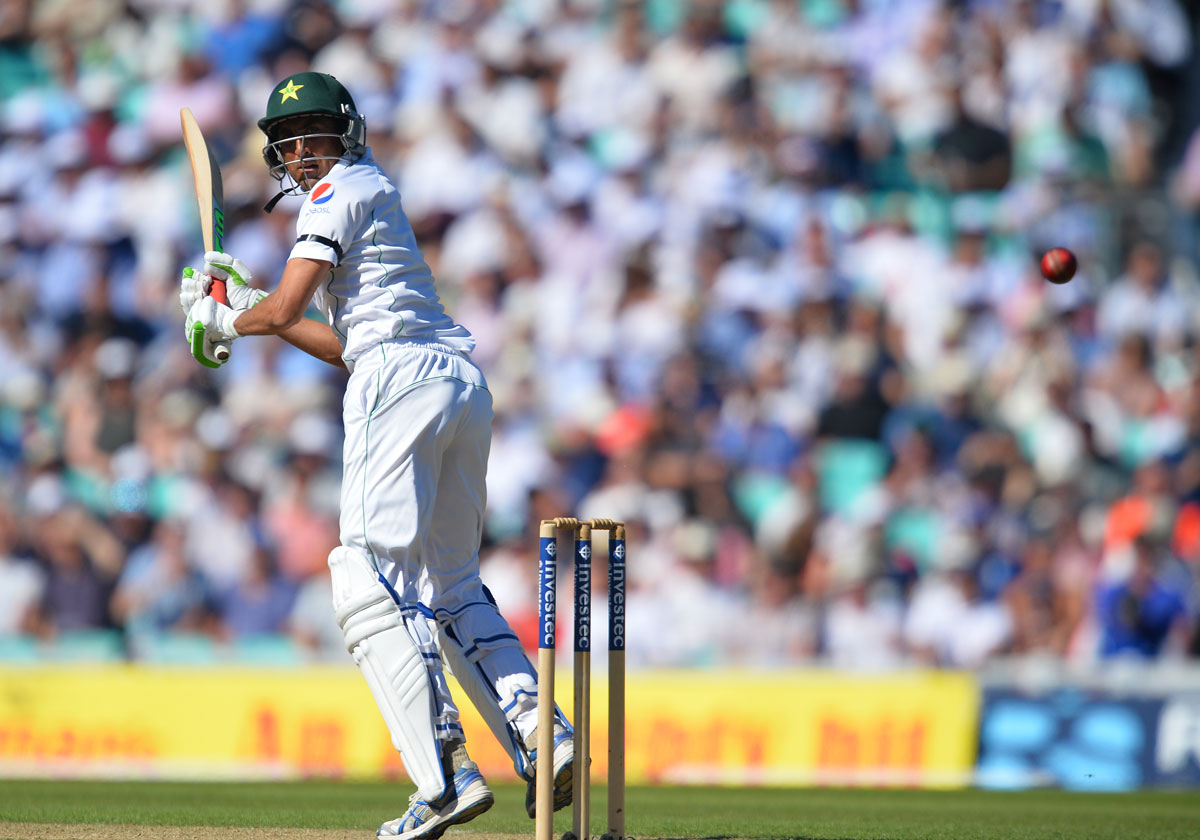 The mood for all Pakistani cricket fans was gloomy this Friday as they were mourning the death of the greatest Pakistani batsman Hanif Mohammad. The flags atop the pavilion were brought to half-mast and the Pakistan players and also the umpires wore black arm bands.

I am not sure about the protocol but it would have been appropriate if the England players also displayed black bands in sympathy with their guests as they so graciously did yesterday for the 63 martyrs of the Quetta bomb blast. It would have been a great goodwill gesture. If the ICC officials did it so should the England team have done the same.

In contrast the day weather wise was glorious and gorgeous with the sky blue and cloudless and the sun shining or should I say blazing down and the breeze ever so gentle as if whispering. In other words it was perfect summer’s day for cricket. It was sell out jam packed Oval.

The capacity is reported to be around 25000. However there were people outside willing to sell tickets at a discounted lower price than the face value. Tickets for adults are priced at GBP 60 and for Under 16 at GBP 30.

Pakistan resumed at 3 for 1 overnight with Azhar Ali and the night watchman Yasir Shah who was brimming with confidence, zest and determination. Azhar was more sedate and steady. Yasir played much quicker than his senior and more talented (in batting) partner.

After adding 49 for the second wicket and having been dropped by Hales at point off a “sitter” Yasir was finally caught by Root in the slips on second attempt for 26. He had defied the pace quartet of England for over an hour.

Both teams have been equally guilty and some players renowned for their brilliance at catching have been the guilty parties. Be they Cook, Root, Vince, Hales, Anderson, Younus, Hafeez, Azhar or Iftikhar all have missed catches which on most occasions they would have couched with comfort. Till Tea today England had dropped a total of 14 and Pakistan 11. And the guilt is equal because England took more wickets than the Pakistanis. Mohammad Amir and Steven Finn have been the main bowlers to suffer.

Just to take a couple of examples yesterday Moeen was dropped by Azhar at third slip which even a club cricketer would have accepted with glee. Moeen was 9 and the lapse cost Pakistan 99 runs; and today Yasir, Azhar and Asad all had “lives” given to them by the butter fingers of the England fielders. What these blemishes will cost them is yet to be calculated.

Today Pakistan batted confidently on a drier pitch under clear and sunny conditions through the efforts first of Yasir and Azhar; then Asad and Azhar.  Once the latter had departed 45 minutes after lunch Younus and Asad were busy steering the Pakistan vessel to safety.

Pakistan went to lunch at 97/2 adding 94 in 27 overs for the loss of Yasir Shah. During lunch it was announced that Hales has been fined 15% of his Match Fee by the ICC referee Sir Richie Richardson for showing dissent at the umpire’s decision when he was ruled out caught by Yasir Shah.

The replays were not clear. This is very surprising that in this day and age the broadcaster could not provide a clearer vision on replay of the incident. In all fairness if there was doubt the benefit should have gone to the batsman.. However because of his dissent and because of what he must have mumbled and said Hales was held to be in breach of the ICC code of conduct. By the way Umpire Oxenford gave 4 byes when Asad clearly edged one to the fine leg fence. What if Asad gets out at 96, 97, 98 or 99.

It has happened before. It was I think Chris Old vs New Zealand who was denied 3 runs and was out when his score was 99!! In such matters now with all the technology the third umpire should have the authority to intervene. We have in this series also seen many a no ball not given when the bowler had clearly overstepped.

Azhar was given out on review. Moeen and the England players had initially appealed for LBW which Oxenford gave not out. England reviewed and the replays clearly showed the ball brushing the glove to be caught by Bairstow. Azhar was thus given out caught behind of Moeen. It was about 45 minutes after lunch and Pakistan at that stage were 127/3.

Younus replaced Azhar and after a careful and somewhat tentative start began to find his classy rhythm. He and Asad looked set for a big partnership and by the time tea was taken Pakistan had progressed to 196/3 still trailing by 132 runs.

After the break for a cuppa Asad and Younus flowed smoothly. Asad cut delicately and crisply. He glanced deftly, defended dourly, drove gracefully. His technique and timing was perfect. He fully deserved to get the coveted century. He was stuck on 99 for 16 deliveries and one wondered whether Oxenford’s mistake will deprive him of that honour.

But all heaved a sigh of relief as Asad got a single and went to complete his 9th hundred in Tests. He offered the Sajda but no push-ups.  Broad brought off a brilliant catch at midwicket as Asad pulled on ferociously from Finn. It was 75 minutes after tea and Pakistan were 277/4. Asad and Younus had put on 150 runs for the 4th wicket and brought Pakistan within touching distance of the England first innings tally of 328.

Woakes was given the second new ball and fully justified Cook’s decision by taking two quick wickets. First Misbah edged one to Hales in the gully and then the debutant Iftikhar after opening his account with a delightful drive tried to pull a short ball from outside the off stump and skied it over the bowlers head. It took more elevation than distance and was well caught by a sprinting and diving Moeen Ali (320 for 6). Woakes with 25 wickets has become the highest wicket taking bowler against Pakistan surpassing 23 by Anderson, and 22 each by Swann and Truman.

Sarfraz came, rotated the strike and helped Younus reach his well earned, well deserved, well merited 32nd hundred in Tests. Younus also performed the sajda after reaching the landmark. It had been a treat to watch this batsman bounce back into form with such gusto. Right from the beginning he jettisoned his jumping jack footwork which he had employed at the crease in the three other tests. He gained in confidence and grace as his innings progressed. He glanced and glided to fine leg with precision, drove regally, pulled powerfully, cut delicately and at times ferociously, and defended solidly.

At close of play Pakistan were 340 for 6 – a lead of 12 with Younus and Sarfraz at the crease. Pakistan need to build a substantial lead to put pressure on the hosts. If this pair stays on they are quite capable of doing that. Another gripping day lies ahead in this test match.