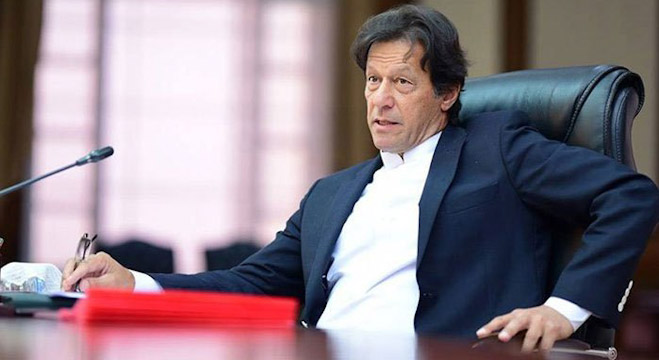 Prime Minister Imran Khan while rejecting the first-class domestic format drafted by PCB Special Task Force has directed to redraft it for introducing a six-team first-class format aimed at raising the standard of the game.

Imran, who is also the Patron-in-Chief of PCB, has also admonished Haroon Rasheed, useless director of domestic cricket, who dared to brief a double PhD in cricket on the new format.

According to details the prime minister opposed the idea of having a large number of teams including departments in first-class cricket and emphasized that ideally there should be six first-class teams, one each from Sindh, Balochistan, Khyber Pakhtunkhwa and Federal Areas and two from Punjab.

The prime minister directed the Task Force to finalize a policy on domestic cricket and share it with him again in the next meeting, after which a final decision will be made about the domestic cricket structure.

In the meeting Imran also expressed his strong reservation about the system producing future cricketers. He is absolutely right when he says that our system has miserably failed to nurture good cricketers and argued that the great cricketers came in the team because of their sheer talent.

It is pertinent that the NCA was formed in 2002 with an aim to groom local talent for international exposure. Ramiz Raja had boasted then that past greats were products of by default and now NCA would prepare real greats.

Can PCB tell us that how many cricketers NCA has produced and how many of them sustained the pressure of international cricket? Sadly over the years the NCA has turned into a den of Notorious Cricketers who have mastered themselves in the art of sycophancy.

After Imran’s admonish, inept Haroon should quit forthwith if he has some decency left in him. Ehsan Mani should also take Imran’s admonition seriously and remove Haroon. In presence of such sycophants and inept officials PCB can’t function and deliver.

It was Mani who had brought Haroon back from Karachi amid pressure of PCB Mafia. Haroon was used to befool non-cricketing chairmen, Zaka Ashraf, Shaharyar and Najam Sethi with his rhetoric on the power-point. Even Mani was impressed by Haroon for his presentation and bring him back.

Mudassar Nazar who was also present in the meeting in which Imran showed his severe resentment over the drafted first-class format must reorganize himself as it is he who is the savior of a couple of sycophants in the NCA. He once dubbed two very ordinary cricketers as the best cricket coaches in the world. They were sent by Ramiz to coach the newly born Bangladesh cricket team. They were kicked out by the Bangladesh Cricket Board from their system. Mudassar must distance himself from these inept former talkative first-class cricketers.

Imran’s rebuke is simply a no-confidence on the working of the Task Force and the BoG. The irony is that the BoG of the PCB, headed by Mani, had also okayed the recommendations of the Task Force in its meeting in December last. Both have lost moral ground. Has any moral reason left for Mani to cling to his job in the PCB after this?

Further, two teams from Punjab would stir another controversy in national cricket. Should we take it as the beginning of the division of Punjab-South Punjab? We have observed that both Karachi and Lahore used to field two teams in QAT. Fielding two teams from Punjab in the new first-class format will be undesirable.

Since the Patron-in-Chief has shown his resentment regarding the working of Task Force, Mani should immediately dissolve it and form a new committee comprising of famed and respected former Test cricketers.