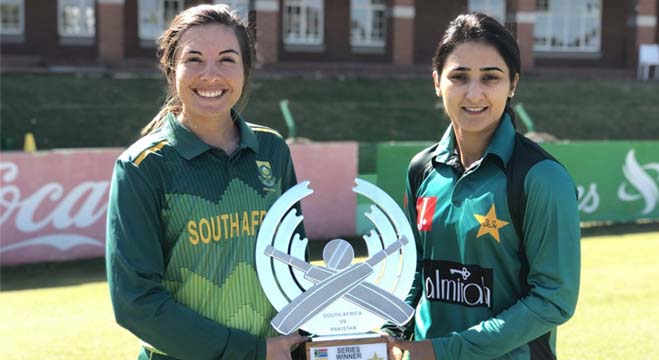 South Africa Women bounced back in the 2nd ODI against Pakistan Women to level the series 1-1 and set up the decider on Sunday, May 12, at Benoni. In terms of context, the 3rd ODI of the Series at Benoni is going to be more than just a decider of a bilateral series. The backdrop of ICC Women’s Championship 2017 has sprinkled some added spice to the mix.

Pakistan Women are facing a never-before opportunity to seal direct qualification into ICC Women’s World Cup 2021 in New Zealand. A couple of months ago, Pakistan Women registered their first-ever bilateral ODI series win against West Indies Women, in UAE. Then, they handed South Africa Women a historic defeat in the 1st ODI of the ongoing series to make serious progress on Championship Points Table.

If South Africa wins, South Africa will rise 1 point higher than India who is currently placed at number 3 in the Points Table. The win will take South Africa to 17 points after 15 matches and almost to direct qualification for ICC Women’s World Cup 2021 in New Zealand.

On the other hand, if Pakistan wins, Pakistan will jump to 4th spot, leapfrogging both South Africa and New Zealand in the Points Table. The win will put them level on points with but behind on run rate with India. The win will take them to 16 points from 15 matches.

ICC Women’s Championship 2017 is the structure of ODIs between the top 8 Women teams in the world to decide the direct qualifications for ICC Women’s Cricket World Cup 2021 to be held in New Zealand. Starting from October 2017, all the 8 sides – Australia, England, India, South Africa, New Zealand, Pakistan, Sri Lanka, and West Indies – are made to play a series of 3 ODIs against every other team.

Once all 8 teams have played 21 matches each, New Zealand – the hosts – and top 4 teams on the Points Table will earn direct qualification for ICC Women’s Cricket World Cup 2012 in New Zealand.

West Indies Women currently occupies 7th spot with 11 points from 12 matches but they are yet to play the top 3 sides in the table – Australia, England and India – and that makes their task of qualification pretty difficult. Sri Lanka Women have 2 points after 15 matches and hence out of the qualification race.

The teams Pakistan Women have to play, after the conclusion of ongoing series, are England and India. Given the reluctance of India to play with Pakistan, the most likely scenario is of India forfeiting their 3 matches against Pakistan and effectively gifting Pakistan Women the crucial 6 points. India’s other remaining series is against West Indies. Series win there will put India Women at 22 points – and pretty secure of qualification – even after forfeiting the series against Pakistan. In the scenario of Pakistan Women losing all 3 matches to England and earning 6 points as a result of forfeiture by India, Pakistan Women will still rise to 20 points (excluding the Final ODI against South Africa).

So, in all likelihood, it might come down to a face-off between Pakistan and South Africa for the 4th direct qualification slot (excluding New Zealand). And for that matter, the Final ODI at Benoni between Pakistan and South Africa practically becomes a knock-out encounter for both the teams. The winner will see themselves almost through while the loser of the match will find themselves in a very unlikely position to earn direct qualification for ICC Women’s Cricket World Cup 2021 in New Zealand.

Which of the Girls In Green would turn the advantage in their favor by winning at Benoni? Would Pakistan Women be able to grasp this golden opportunity? Let’s wait and see.

‘Stop playing with our youngsters’ careers’