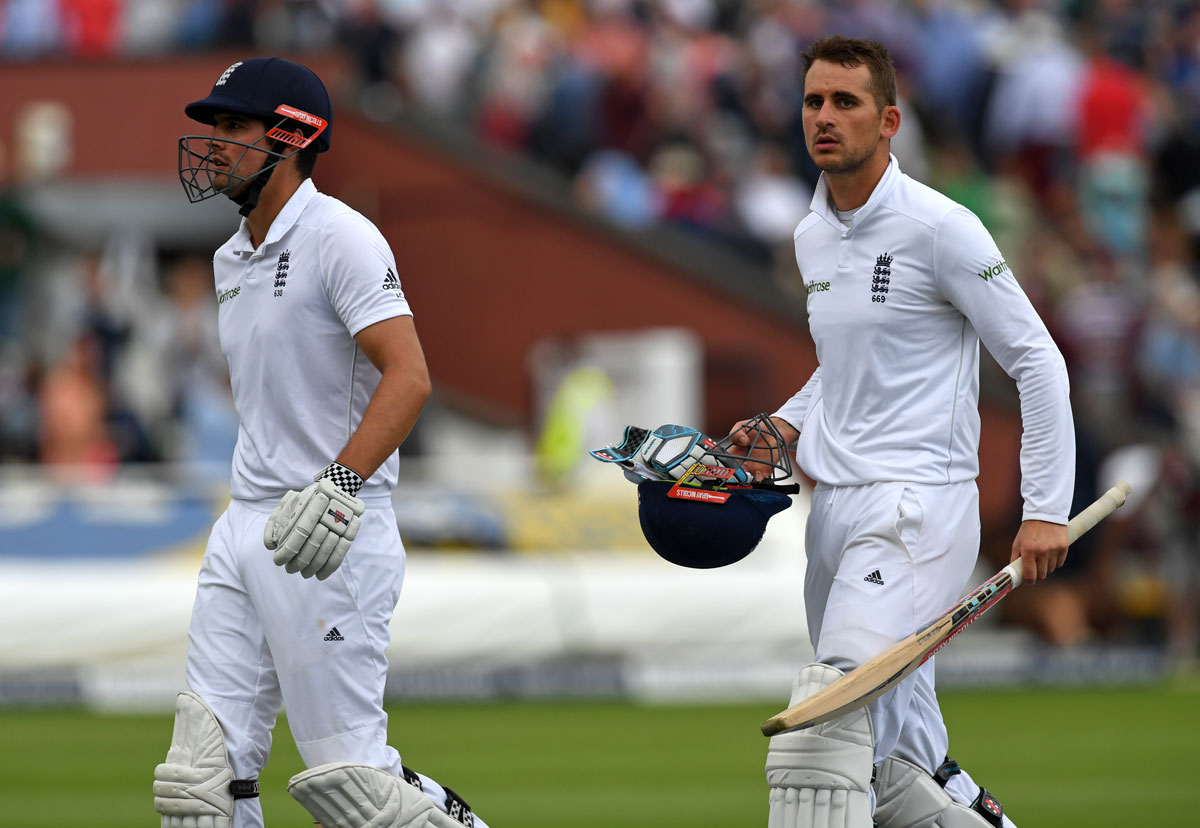 In 46 overs today and a ball yesterday plus Pakistan slumped from 257 for 2 to 400 all out which meant the last eight wickets added a mere 143 runs. When Misbah and Sarfraz were at the crease with the scoreboard showing 358 for 5 Pakistan looked like getting to the targeted 450 plus.

But it was the same story yet again. Once Younus still struggling to get back into his usual fluent groove and Asad after scratching about for some time without getting of his mark received a beauty from Broad which beat him all ends up and comprehensively castled him had gone it looked that the 6th wicket pair will put on a substantial partnership. They were in the process of doing it when Misbah once again playing an innings which was a blend of defence and aggression was unfortunate to be out after a delivery from Anderson went off his glove on to the boot and then rolled on to dislodge the bails.

He got another half century. Sarfraz was left with the tail and should have “farmed” the bowling which these days seems to be going out of fashion. The tail is left to look after itself and the Pakistani tail as has been the case on every occasion could not do that again. And four wickets fell for the addition for the addition of 42. Sarfraz was left high and dry on 46 with Yasir, Amir, Sohail and Rahat unable to get into double figures. Rahat was given a respite when England continued to drop catches. This time Rahat was let off by Cook of the luckless Finn. Pakistan were all out 400 a lead of 103. Woakes and Broad claimed three each while Anderson got two and Sami and Yasir were run out.

The England openers learnt from their first innings mistakes and not only blunted the Pakistani pace but also negotiated the wiles and guiles of Yasir Shah to post 120 without loss in the 35 overs bowled. Both Cook and Hales scored at a brisk pace of around 3.5 runs per over and reached their half centuries.

Cook became the highest run scorer for England. England finished the day at 120 for no loss or in effect 17 for no loss. Sohail Khan was clobbered for 40 off 8 overs as he indulged in giving width to Cook and Hales.

Today Anderson was removed from the bowling crease when Umpire Lewis warned him for treading on to the danger zone of the pitch. This was the third and as such final warning because Anderson had been warned twice yesterday by Umpire Bruce Oxenford. No tantrums this time because Anderson was let off by the Umpires and Referee yesterday for arguing with the officials. The officials have been lenient in their application of the follow through from the bowlers on to the danger zone. Finn completed the over.

Anderson’s suspension did not cost England dearly as Pakistan had already lost eight wickets and their tail end of the tail has seldom bothered the opposition. This is the second time this year that Anderson has been penalized for running on to the danger zone.

The match is intriguingly poised and Pakistan will have to get rid of the England second innings wicket in quick time and for as modest a total as possible so that they have a gettable target.

Batting on this pitch will not be exactly a walk in the garden. Tomorrow’s weather forecast is partly cloudy with a max temp of 23 deg C. We had a near full stadium today and it will the same tomorrow and on Sunday. 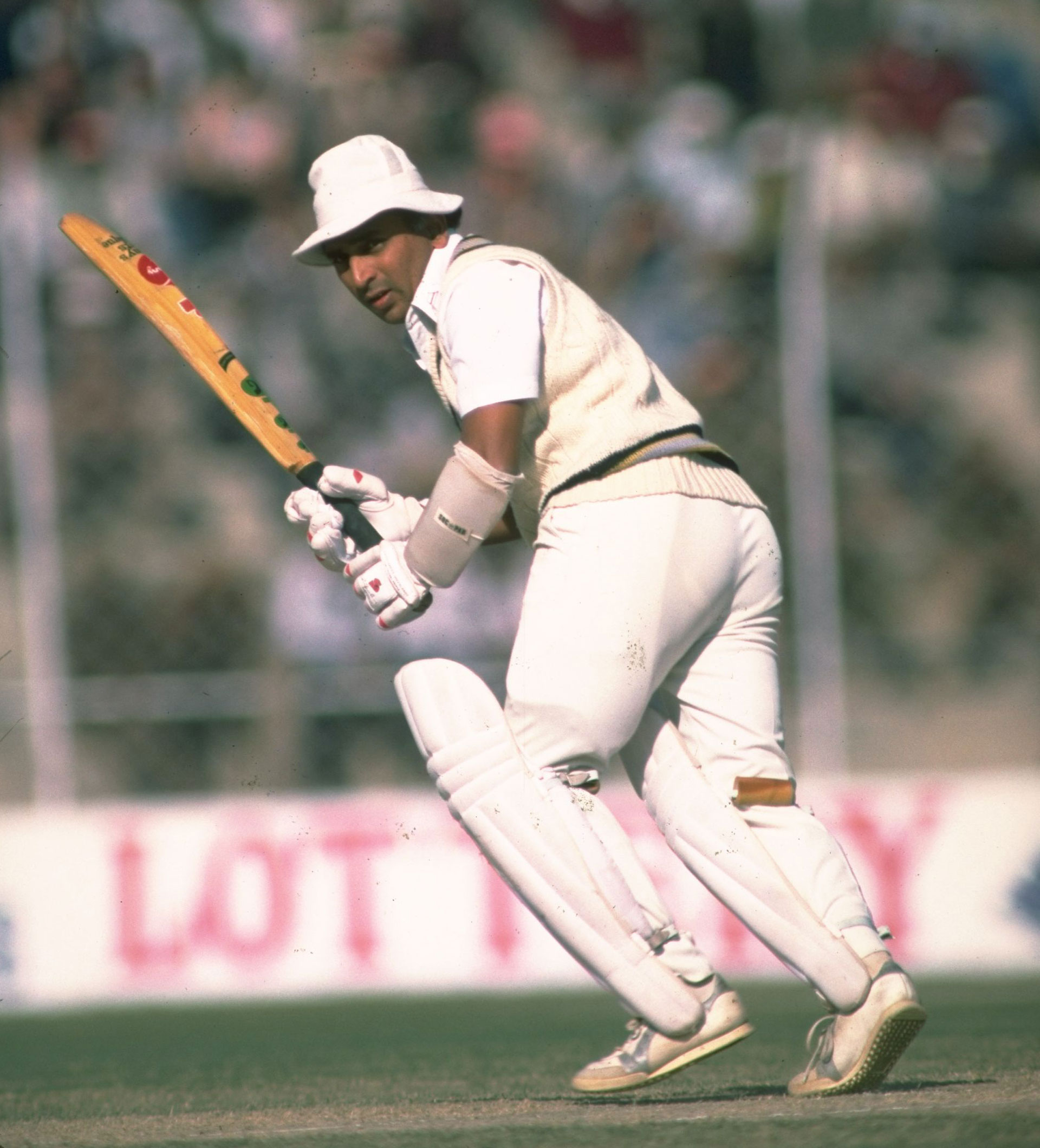 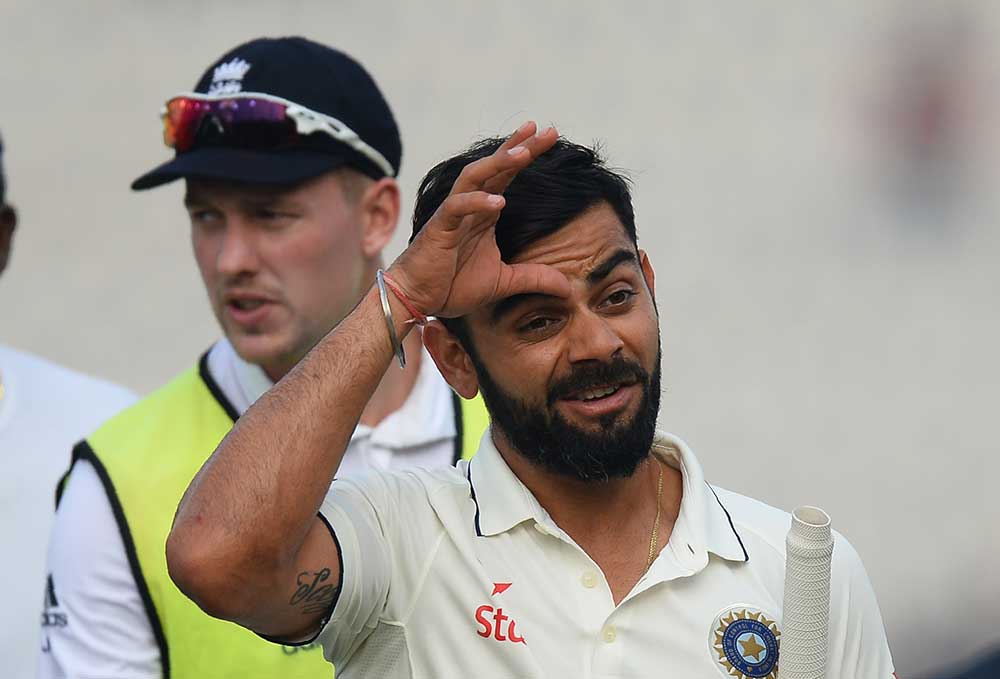 India can win on any track, says Kohli