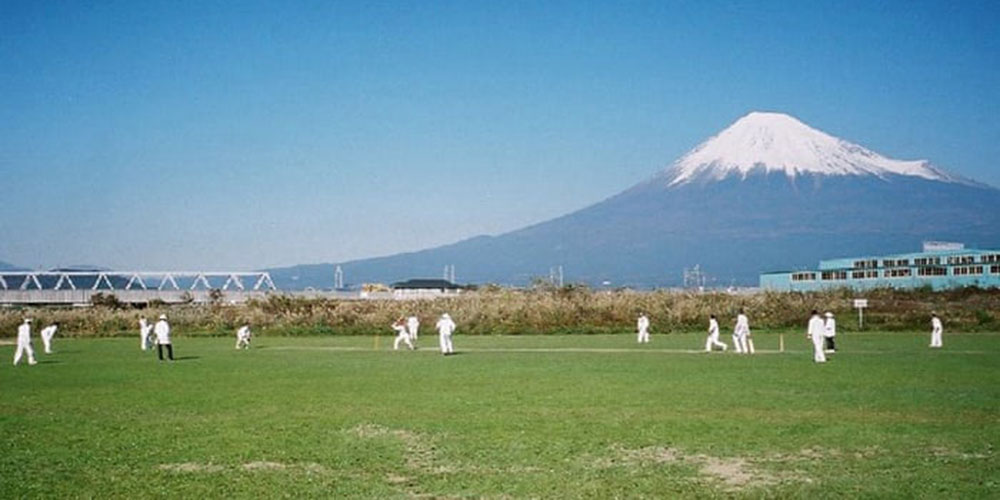 Cricket in the Land of the Red Sun

Japan, a country known for its Shoguns, Samurais, Kabuki, Mama-Sans and Ryokan with Futons, saw the arrival of cricket on its shores over 157 years ago. Yet cricket was still not as popular there as the American Baseball or its national sport of Sumo wrestling which has a history spanning many centuries. During our two consecutive around the world tours in 1983 and 1984, my family, Becky, Ambereen and I never saw any traces of cricket in Japan with Mount Fuji in the backdrop.

However, Pakistanis had their first exposure to Japanese sport in 1976 when wrestler Inoki matched his skills in a free style match with the world champion American boxer Muhammed Ali and then had a freestyle wrestling match with Akram Pehlwan the same year where he dislocated the arm of the Pakistani competitor. The incident was avenged by his nephew, wrestler Zubair Jhara in 1979 when he defeated Inoki in a freestyle challenge match.

Japan has retained its way of life and values which go back to thousands of years. Its culture remains undaunted with the unique combination of the old-world charm and modernization. Known as a giant of the modern world in electronics, ship building, automobile industry and its Bullet Train, Japan still maintains its Geisha Houses and Tea Ceremonies in line with their centuries old traditions. No one accepts tips as it is considered disrespectful. Japanese culture prizes respect and dignity far more than tipping.

Nevertheless, It is difficult to forget that during World War II, the Japanese did not allow the prisoners of war the facility of any sport. Japan did not sign the Geneva Convention Accord in 1929 that established the standards for the treatment of POWs in their camps. The Japanese military establishment chose not to pass on most of the food and clothing parcels sent to the Allied POWs in Japanese hands. As a result, the POWs in camps faced starvation level conditions. The treatment of American and the Allied prisoners by the Japanese is one of the abiding horrors of WWII. Prisoners were routinely beaten, starved and abused. They were forced to work in mines and war related factories in clear violation of the Geneva Convention.

However, on the other hand when the Pakistani soldiers became the POWs of India at the fall of East Pakistan in December 1971, former Pakistan test cricketer Lt. Col. Shujauddin who too had become a prisoner of war wrote to the MCC to send cricket playing equipment so that the prisoners of war could play cricket in his camp. MCC Secretary D. B. Carr responding to his request sent cricket equipment which the POWs utilized and held ‘Test Matches’ among themselves.

With such a background, the cricketing roots of Japan date back to June 25, 1863 when a Royal Navy team made from the officers on ships sent to protect British expats in Japan played their first match on a grassless patch of reclaimed land by the Foreign Settlement. It was five years before the time of the Meiji Restoration. 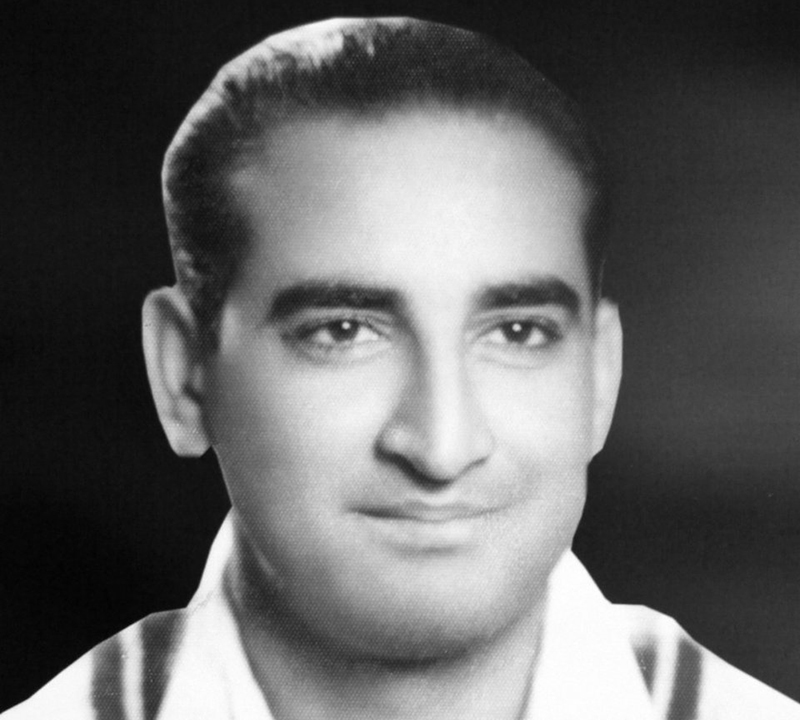 A hush fell as the lanky James Campbell Fraser walked out to bat for the Shore team. He was a swashbuckling Scotsman who had played some cricket at Harrow but not for the first team. However, while working at Liverpool he did play a game against an England XI before arriving in Japan in 1862. Knowing Fraser’s big hitting prowess, the Royal Navy players spread out on the ground. The fielding side had placed a pistol set down behind the stumps. “It was the most novel sensation for the wicket-keeper, as he carried his revolver backwards and forwards from wicket to wicket and placed it behind the stumps,” Fraser wrote in the April 16, 1908 issue of London based cricket magazine. He explained that the teams played with their revolvers ready for any emergency. The ground was guarded by a small force armed with rifles.

The future polar explorer Admiral Sir Albert Hastings Markham, who played in the match as a young lieutenant noted, “It is, I suppose, the only match on record in which the players had to be armed.” Such was the actual day when the first ever game of cricket was played in Japan. The players of both the teams were armed and edgy because June 25, 1863, had been declared in the name of Shogun Tokugawa Iemochi as the day to start killing foreigners who ignored his order to leave.

In those days, a decade after the U.S. Navy Commander Matthew Perry’s Black Ships appeared off Edo, the present-day Tokyo to begin probing Japan, opened after more than two hundred years of self-imposed international isolation.

Foreign residents were still shaken by the murder in Namamugi, outside Yokohama, of an English merchant named Charles Richardson in the previous September. The 28 years old merchant was riding with his friends who had stopped over EnRoute home from Shanghai when he was killed by the bodyguards of a Satsuma noble whose retinue he disrespectfully approached too closely. With Britain and Japan at loggerheads over the compensation demands, Yokohama was no place for the fainthearted. According to Fraser, “The European residents, who were few at the time, had been frequently warned by the Japanese that they were going to be assassinated by a band of disaffected Samurai.

However, they had been warned so often without anything really happening, that they stopped taking anything seriously. Meanwhile extra Royal Navy warships also arrived, ready to back up Britain’s huge reparation demands for the killing of the Englishman. Col. St. John Neale, the British Charge d’ Affairs at Yokohama warned the Englishmen that they were going to be attacked on June 25, 1863, and that they should leave Japan and move to China as he felt he did not have the ability to protect them. The Englishmen were willing to take his advice provided the British government guaranteed to compensate them for the losses they would bear through leaving the country. Since Col. Neale was unable to offer a guarantee, the Englishmen resolved to stay and defend themselves, if attacked, relying heavily on the Royal Navy present in the harbor.

As the anticipated day of attack approached, the native population of Yokohama, including the servants, cleared out. The business had come to a standstill and the Englishmen wondered how they should pass the time? Therefore, a cricket match was suggested and a challenge sent to the British Fleet. The real motive for having the match on June 25 was not entirely a spirit of sporting friendship. It was the fear of attack of the isolated residents and their desire to have armed guards close by rather than on the ships in the port.

Fraser was boastful of playing against an All-England XI and hitting John “Foghorn” Jackson, the fastest England bowler of the day, over the boundary for a six. But in Yokohama that good fortune was not with him. Fraser wrote in Harrow’s 1910 School Register that he captained the Yokohama side in 1863 in a cricket match against the Fleet and played in curious circumstances. He did not disclose the scores but sent the pictures of the two participating teams to the MCC. These two pictures are the oldest photos of a western game in Japan. The reasons why any records of the game were lost are twofold. Firstly, no local newspapers from June 1863 have survived. Secondly, when Fraser left Japan in 1868, he left behind another Scottish cricketer, J. P. Mollison, to run his trading business. 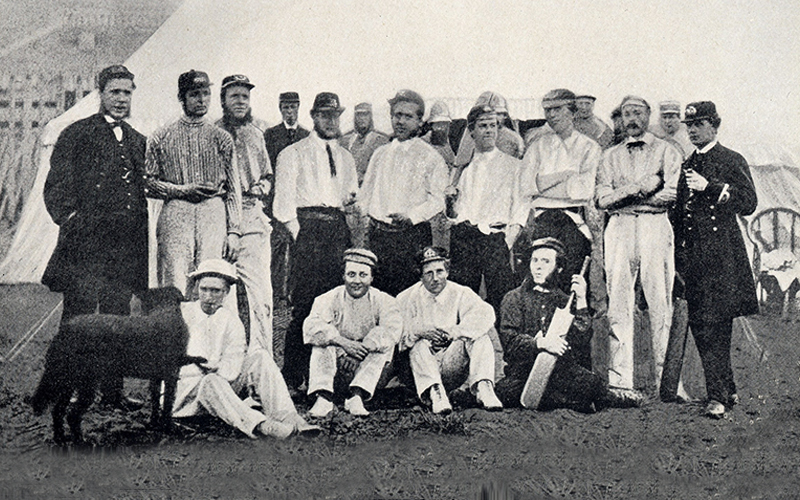 Soon after, the 23 years old James Pender Mollison, a tea merchant, who was mad about cricket and had previously lived in Shanghai and played cricket there as well, founded the Yokohama Cricket Club, the forerunner of the present Yokohama Country & Athletic Club, in the dining room of his Yokohama home with the help of his friend Ernest Price and some others in 1868. Mollison became the President and Price the Secretary of the club. Mollison ignored the 1863 cricket match in all his speeches and writings as he wished to go down in history as the founder of cricket in Japan.

It was only because of the obituary of Rawson in Wisden, the 1863 game was rediscovered, as he had played in the first cricket match ever to be played in Japan. Rawson was the member of the Fleet team that defeated Yokohama in 1863.

Although Fraser may have hoped “A Samurai stopped play”, a call from the umpire to avoid the humiliation of a pending defeat but no attack took place on that day or afterwards. Very soon the native population began to return. James Campbell, Fraser, Albert Markham, Harry Rawson and others would turn in their graves if they knew that a hundred years on their game had been lost to history, and instead a relatively mundane encounter between the Royal Navy and the British Garrison in November 1864 was long believed to be Japan’s first cricket match.

Seven weeks later, the visiting players saw action when the Royal Navy bombarded Kagoshima, Kyushu, the home base of the Satsuma clan in a bid to extract blood money for Richardson’s killing in the Namamugi incident.

Robert-Gilles Martineau, a Frenchman living in Shizuoka is considered to be the founder of cricket in Japan. Martineau, who had lived in England, fell in love with cricket. He and Professor Makoto Yamada of Kobe Gaidai University got together to officially establish the Japan Cricket Association in July 1984. Professor Yamada became the Chairman and Martineau its first Secretary. The two obtained, The Japan Cricket Association, the Affiliate Membership of the MCC in July 1988 with the help of its chairman Lt. Col. John Stephenson. Martineau and the Shizuoka Cricket Association also secured a Japanese translation of The Laws of Cricket. After many years of developing cricket at national and international levels, Martineau and the expatriates who had served cricket in Japan, handed over the management to the Japanese members.

The Kanto Cricket League (KCL) is the first formal cricket league in Japan that started in the early 1990s. At that time, it was called Kanto Cup and all the players, with some exceptions, were non-Japanese, mostly from India, Pakistan, Australia, New Zealand and England.

Originally only a handful of teams participated in the Kanto Cup but expanded over the years. In 2002 YC&AC, the KC agreed to become an official competition under JCA. The competition was then renamed as Kanto Cricket League. As a result, many Japanese teams joined the KCL competition. In 2006 differences arose between the JCA and the original KCL.

The original KCL was disbanded and a new KCL was formed. The competition is now on with teams competing in two groups. Starting with only 9 teams in 2006, the new KCL now has 12 teams. It is considered to be the strongest of the cricket competitions in Japan 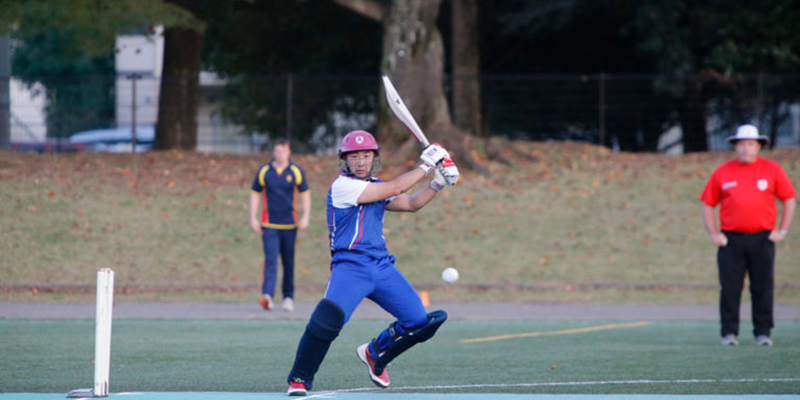 However, locating suitable grounds is still one of the main problems in playing cricket in Japan. Teams from KCL also compete in overseas 6-A-Side tournaments and play in Hong Kong, Philippines and Thailand. Members of KCL also coach Japanese school children. KCL comes under the Tokyo Cricket Association. Japan has also been an Associate ICC member since 1989. It also became a member of the International Women’s Cricket Council in 1995.

The first international tournament for men that Japan participated in was the ACC Trophy held in Malaysia in 1996. The Japanese Women’s team made its international debut in 2006 in the IWCC Trophy held in the Netherlands. The qualification for the U-19 World Cup 2020 was a major milestone. There are about 3000 players and 200 teams, including those for U15s, Women and University students. Club cricket was originally played over two days with limited overs. Sano in Tochigi is considered to be a spiritual home of cricket with five pitches. The Japanese cricket season runs from April to November.

The Kiwis Gutted But Gracious