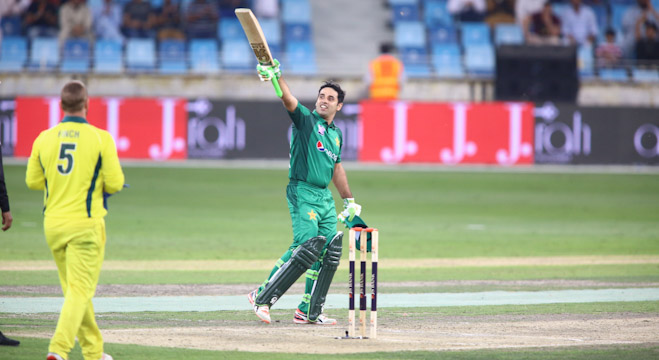 Making his debut at 31 and that too because key players were rested, opener Abid Ali grabbed the opportunity in style and demonstrated his immense resilience and grit to expose our failed system where talent is wasted at personal whims. His brilliant innings of 112 against Australia in Dubai was not only a blend of excellent temperament, technique and defense but an eye opener for the selectors.

Abid batted in pressure with his unflappable defense. From the Non-Striker’s End he watched his partner getting out on the fifth ball of the first over. He knew that his team had already lost first three matches and only an academic interest was left in the five match series. But he composed his nerves, showed great resilience against Australian pace and spin attack and became the third Pakistani to make a century on debut. Abid looked solid, technically sound, mentally and physically strong throughout his innings. He played shots, front foot drive, back foot punch, a little bit of hook and pull. Particularly, he stepped forward perfectly on a ball from Coulter-Nile before playing a classical cover drive through the covers. A wristy player like Azharuddin, the great Indian captain!

Abid Ali’s remarkable innings, a blend of perfect balance and sharp eye on the ball, has brought him in the limelight as a strong contender to get a berth in the WC-2019 squad. He faced experienced Australian spin duo of Lyon and Zampa with confidence and never let loose his nerves. He proved to us that he is the batsman that we desperately need in English conditions. PCB has decided to send its team almost a month ahead of the WC and it would be a wonderful opportunity and time for the newcomers like Abid Ali to learn from English conditions and adjust themselves accordingly. For sure, unlike Ahmed Shehzad and Umar Akmal, Abid would not spoil the atmosphere of the dressing room and also abstain from swinging his bat wildly during crucial stage of a match. The selectors need to ponder upon seriously!

Let’s see how Inzamam considers Abid along with his nephew and Mickey’s favorite Ahmed Shehzad. Can Abid be the next Misbah for Pakistan whom Inzmam always ignored when he was the captain of the team? Will history be repeated again? This, a million dollars question!

Allowing Smith to play is like giving him license to cheat further! The ICC must step in.