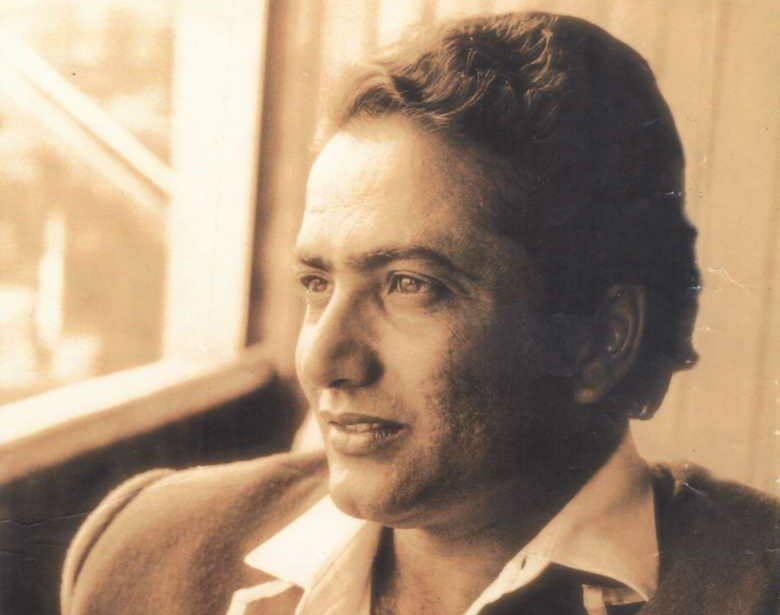 The shining light of Pakistan cricket Hanif Mohammad, a legendary batsman of his era is no more with us. Having had an operation for liver cancer in London three years ago he had to be hospitalized a couple of time as symptoms of the fatal disease kept coming up to finally take him back for treatment for a severe breathing problem which ended in breathing his last on August 11, 2016 in Agha Khan hospital. He was 81.

Born on December 21, 1934 in the state of Junagadh, he along with his parents and four brothers Wazir Mohammad, Raees Mohammad, Mushtaq Mohammad and Sadiq Mohammad had migrated to what became Pakistan in 1947 to settle down in Karachi where he honed his skills in batting to become not only the first of the greats amongst the Pakistan batsmen but also one of the greats of his time to be dubbed as the first ‘Little Master’ of the game.

At 13 when he was admitted to Sind Madressah-tul-Islam school where the father of the nation Quaid-e-Azam Mohammad Ali Jinnah also had studied, Hanif was lucky to get under the tutelage of a former Indian wicket-keeper Abdul Aziz Durrani who before partition had played in an unofficial Test in 1936 and had also migrated to Pakistan.

Master Aziz as he was popularly known was the father of Salim Durrani who in later years played as an all-rounder for India.

A child prodigy Hanif’s dedication started to show colours when while at school he scored a triple century (309*) in an inter-school match to announce himself. A new born nation Pakistan couldn’t have asked for more to strengthen their already ready- made cricket culture than to get him inducted to play for his country.

Earlier when he was sent to London to be coached by Alf Gover, a former England fast bowler who ran a coaching school at Wandsworth. Having looked at him Gover told the cricket authorities in Pakistan that ‘This boy is good technically that I can not teach him anything, just keep him playing. Gover was not wrong.

Pakistan was not a Test playing country then and also was struggling to find their feet to establish themselves at every level including sports.

As word got around about the youngster’s talent with the bat he was invited to play for Bahawalpur and Karachi team against the 1951 MCC team led by Nigel Howard to make his first-class debut.

Playing for the first time on a turf wicket at Dring Stadium Bahawalpur he opened the batting with Nazar Mohammad  to make 26 while facing the pace of Brian Statham and Derek Shakelton. A performance which gave him the opportunity to play for his country in an unofficial Test against MCC at Karachi Gymkhana where Pakistan defeated the MCC by four wickets.

Which in fact earned Pakistan the full membership of the ICC and the Test status with it.

Hanif’s innings of 64 in the second innings while chasing 288 runs to win had laid the foundation of a Pakistan win, match in which his captain Abdul Hafeez Kardar also made a fifty.

On Pakistan’s first tour of India in 1952 as a full-fledged Test playing nation Hanif and Pakistan were then launched on the cricket world’s stage. His contribution along with the lion-hearted pace bowler Fazal Mahmood and Nazar Mohammad the first century maker in Test cricket for Pakistan elevated his country’s status despite a series lost.

He had started the tour with century in each innings at Amritsar against the North Zone (121 & 109*) to become the youngest at 17 to achieve that feat.

He gained the distinction of being the first Pakistan batsman to score a half century in a Test when playing at Delhi in the first Test at the Feroze Shah Kotla. Also missing his first Test century in the third Test at Bombay when he was out for 96.

It did not take him long though to score a hundred in Test when India visited Pakistan in 1955. Hanif became the first century maker in Tests on home soil.

But what really launched him on the world stage was Pakistan’s first tour to the West Indies in 1957-58 under Hafeez Kardar.

At Barbados in the first ever Test against West Indies, Pakistan trailing behind by 473 runs after West Indies had scored 579 when asked to follow on in a six day match, a defeat was imminent.

And only a miracle could save Pakistan and that miracle came in the shape of this 6’ feet 6 inch little batsman Hanif  who ended up making 337 runs, staying at the crease for 970 minutes (16 hours 10 minutes) to record the longest innings played in Test cricket history and the first triple hundred scored in a second innings of a match.

Only couple of years ago in 2014 Brendon McCullum of New Zealand made that triple century against India in the second innings.

Facing the pace an fury of Roy Gilchrist and Dewdney he defied West Indians for more than three days to earn an impossible draw. And that was without a helmet or a thigh guard.

In his autobiography ‘Playing for Pakistan’ which I assisted him writing he told me how a young spectator in that match perched on a branch of tree outside the ground watching him bat for three days dozed off and fell from the tree to break his arm. When the story got into the paper before Hanif got out the boy was invited inside the ground by Kardar to sit in the pavilion and watch Hanif bat.

Pakistan lost that series of five matches in which Garfield Sobers also scored 365 at Jamaica to hold the record of the highest individual score in a Test passing Sir Len Hutton’s 364 against Australia in 1938.

Hanif’s status from then on took a turn for the destined greatness even further.

Only year later he broke Sir Don Bradman’s record of highest individual score of 452 by making 499 for Karachi against Bahawalpur in a Quaid-e-Azam Trophy first-class match.

He was run out in the last over of the match attempting get to 500 mark. It was the scoreboard mistake Hanif always maintained. ’I was 498 and two balls left for the day but score card showed 496 so I decided to get those four runs and ran but before the second run I was run out from a throw form Mohammad Ramazan.

I am privileged to say that previous to that marathon innings I had got him caught off my bowling playing for Sind at Hyderabad after he had made 129 against us. The only time I took his wicket in eight seasons of first-class cricket.

On his only tour to Australia as a captain when Pakistan played only one Test in 1964-65 Hanif scored a century in the first innings and 93 in the second when Barry Jarman the keeper claimed to have stumped him.

The former Australian captain Ian Chappell who was making his debut in that Test openly told me that Hanif was wrongly given out in the second innings.’ I was standing in the slips and the keeper didn’t have the ball in his gloves when he broke the bails.’ Chappell told me.

In 1967 I witnessed his 187* at Lord’s when he toured England as captain. That was remarkable piece of batting that I ever watched.

He was no less than genius as a batsman. Solid defence, ummatched skills and technique, and cool temperament to go with combined with his incredible power of concentration he no doubt was a unique batsman.

After taking guard he would touch his cap, stroke his right thigh with his gloves and then twirl his bat right round before facing a bowler. A trait he carried with him all his life when batting.

He was the first to play a reverse sweep in a Test match, shot which was later perfected by his younger brother Mushtaq Mohammad and now a common sight, especially in the limited over games.

His eldest brother Wazir and younger than him Mushtaq and Sadiq also played in Tests with distinction as did his son Shoaib Mohammad later. Only Raees one of the best amongst the brothers missed out. But he did act as 12th man in a Test against India in 1955 home series.

His father had died of throat cancer much before Hanif took the centre stage in the game but his mother Ameer Bee who raised him and his brothers herself was a badminton player and excelled in it.

Hanif’s last Test was against New Zealand in 1969 series at home in which all the three brothers, Mushtaq and Sadiq played. This being Sadiq’s first and Hanif’s last.

Remarkable that in Pakistan’s 101 Tests the country never took the field without a Mohammad brother.

A recipient of Pride of Performance and Wisden Cricketer of the year in 1968 Hanif along with Imran Khan and Javed Miandad was first of 55 inductees in the ICC Hall of Fame in 2009.

Sunil Gavaskar once told me how he first met Hanif. ’I was at Heathrow airport to take a flight when I saw Hanif in a duty free shop and I immediately rushed to meet my childhood role model.

‘It told him I am Gavaskar and I watched him as a schoolboy when he was batting at Brabourne Stadium. Hanif turned around and said, ’Oh you are a great batsman Sunil of what I have heard of you and I said, Sir not better than you.

May he live in eternal bliss.

Secret approval of PCB constitution is identical of revocation of Article-370 by Modi!