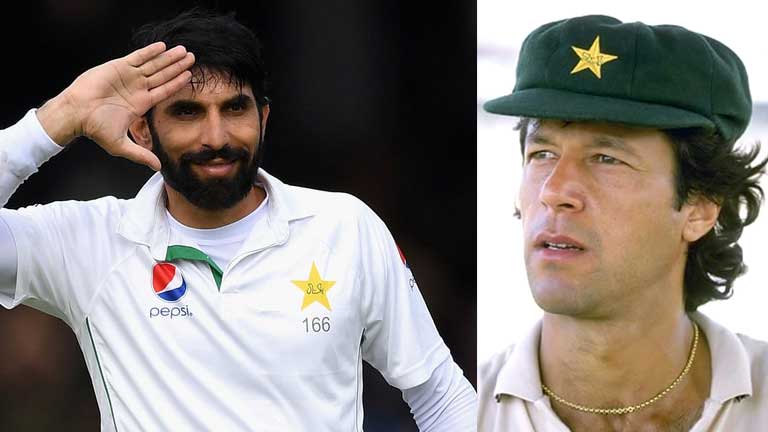 With the conclusion of 2nd Test between Pakistan and West Indies at Abu Dhabi, Misbah has now equaled the record of Imran Khan forrepresenting Pakistan as a captain in the most number of Test matches. Inevitably, it has triggered the urge to compare the two stalwarts of Pakistan Test Cricket history– the two Niazis from Mianwali. 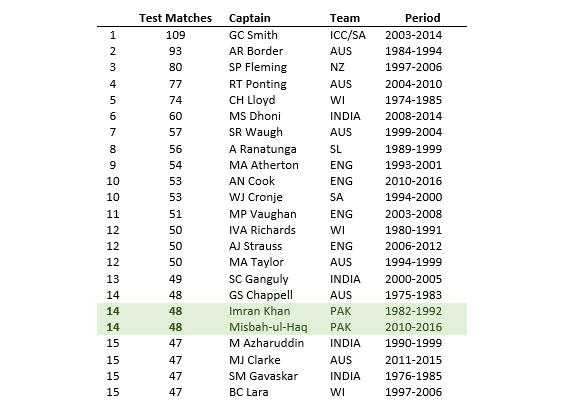 Although the tally of Misbah and Imran looks ordinary in the overall list, in a Cricketing set up as volatile and unstable as Pakistan’s, this is no ordinary achievement by any means. Out of 30 players who captained Pakistan in 401 Tests, only 1 in 6 (5 of them) managed to lead the side in 25 or more Tests, almost 1 in 2 (16 of them) led the side in less than 10 Test matcheswhile almost 1 in 3 (9 captains) captained in 5 or less Test Matches played by Pakistan. 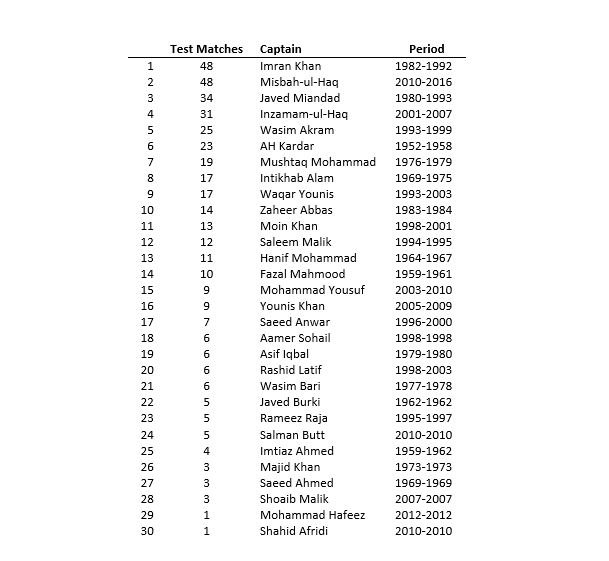 In the context of winning the Test matches as captain, Misbah has outperformed every other captain of Pakistan by a long distance. With 24 wins, Misbah stands well clear of Imran Khan who comes next in the list, tied with another Pakistani legend, Javed Miandad, with 14 wins.

On the other hand, Misbah also stands as the captain who has lost the highest number of Test matches for Pakistan with 13 losses. Imran Khan lost only 8 Tests as Pakistan Captain that reflects the general tendency of most matches ending in a draw and lower probability of Test matches producing a result during Imran’s tenure as a captain.

In between, Misbah and Imran, there appears Inzamam who occupies the 2nd spot with 11 Test losses as a captain, interestingly, as many as the number of Tests he won as captain for Pakistan. The higher number of Test wins and losses for both Misbah and Inzamam hints at the rise in proportion of decisive encounters in Test Cricket during last decade or so – since the arrival of T20 Cricket. 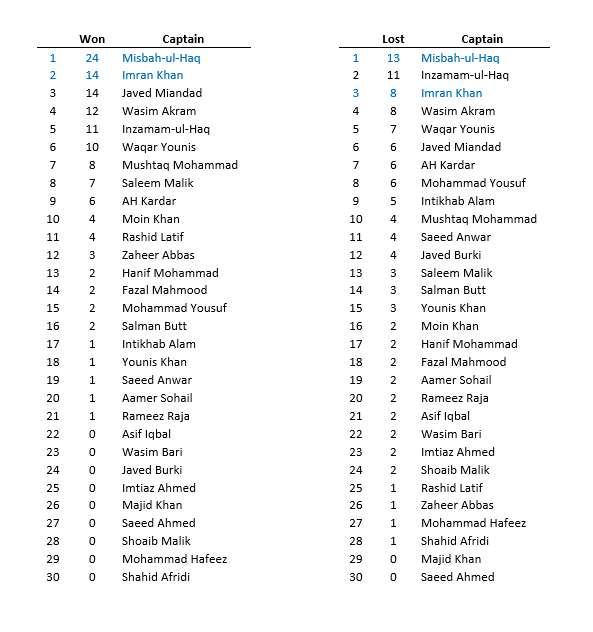 Translating the number of wins and losses into the percentage of number of Tests won or lost by a Test captain provides a good measure of how all Test captains of Pakistan would have fared had all of them captained equal number of tests, and where Misbah and Imran would stand in that list. 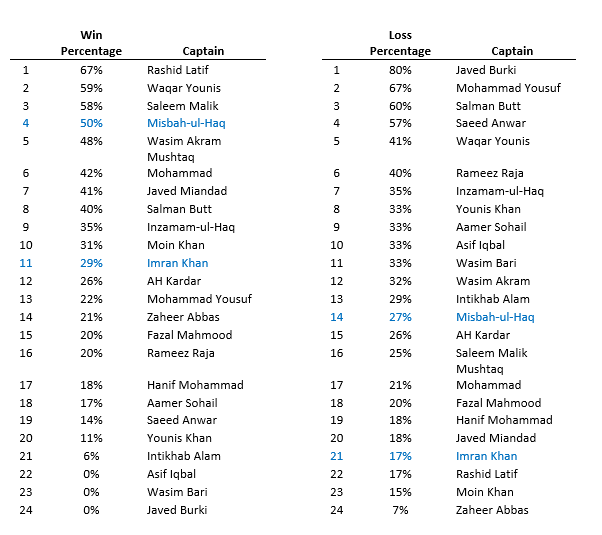 To exclude makeshift/stand-in captains, numbers of captain in less than 5 Tests excluded 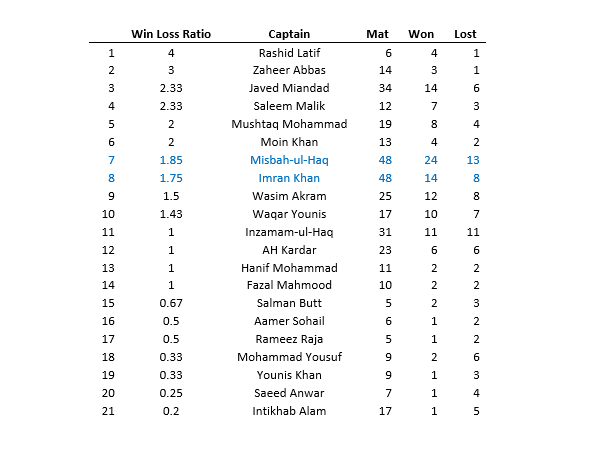 Coming back to comparison of records of specifically Misbah and Imran, the following tables provides a summary of their Test Captaincy record including all Test Matches and Test Series results. 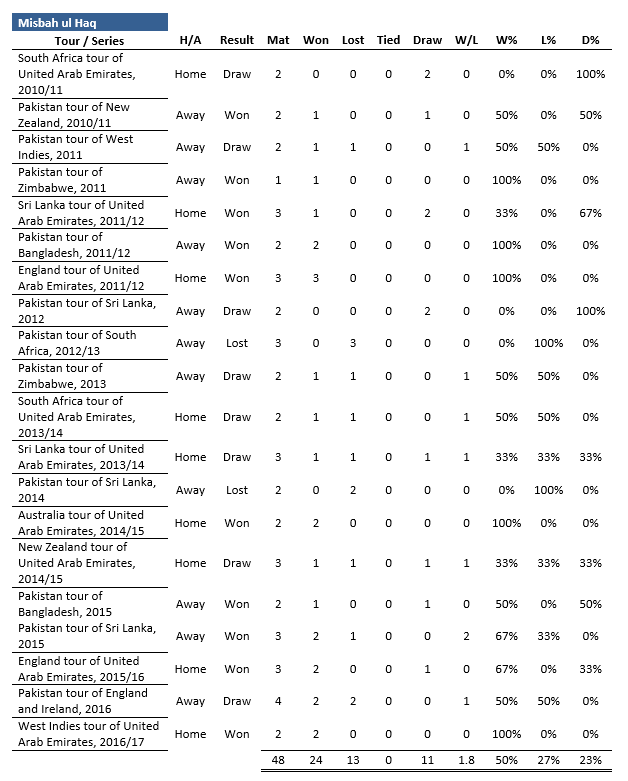 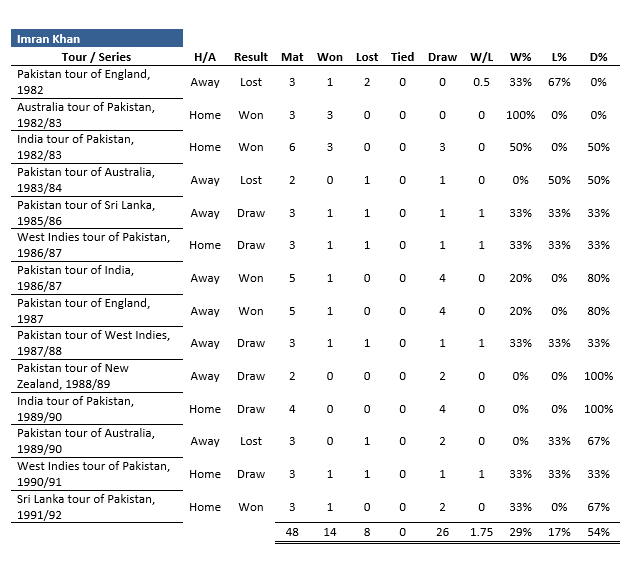 Moving on to Test Series results, Misbah looks to have outperformed the great Khan by quite a margin 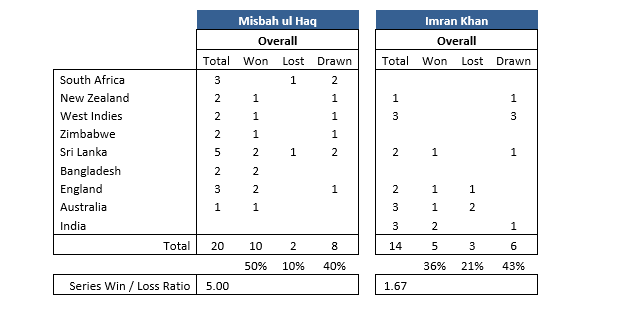 Breaking down the Test Results Summary on home and away basis leads to some interesting readings. There is not much difference in the home record. Neither Misbah nor Imran ever lost a home series and win and loss percentages at home are pretty identical as well. The only difference in it is the fact that in case of Misbah, all his home games have taken place in UAE instead of Pakistan.

That’s how far numbers and stats can assist us. On the whole, Misbah’s numbers look overwhelming, however, what it does not factor in is the quality of opposition and playing conditions, and that’s where the description of greatness lies.

Away from home, Imran Khan managed to win only 2 Test Series as compared to Misbah’s 5. But those 2 of Imran’s Test series wins came against England and India which were first of its kind and considered herculean assignment in that day and age. Among the 3 Test series Imran drew away from home, 2 of them – 1986 tour to Sri Lanka and 1987 tour to West Indies – are remembered more for highly debated umpiring (unsatisfactory, to say the least) by the home umpires.

Whereas, out of Misbah’s 5 away Test Series wins, 2 came against Bangladesh, 1 against Zimbabwe and 1 against Sri Lanka without Mahela and where Sangakkara retired before the final Test. On the other hand, Misbah failed to win the away series against Zimbabwe in 2013 and against a West Indies side of 2011. He also failed to win the series in England after winning the first Test and still managing to lose the third Test from an apparently undefeatable position. As for away losses, 2013 tour to South Africa was practically a tame-surrender and 2014 tour to Sri Lanka proved to be Pakistan’s contribution to Mahela’s farewell where Pakistan managed to lose the matches from less challenging positions.

As for Home Series, Imran’s 2 drawn Test Series against the West Indians of 80’s were as good as a win and India’s tour of 1989 left nothing much to write about except for debuts of future greats on either side.
Misbah’s drawn series at home turf carries lesser weight. Against New Zealand in 2014 and South Africa in 2013, Misbah’s men failed to protect the advantage of winning the first Test in a 2-Match series and lost the final Tests of the series on both occasions to let the visitors level the series. In 2013/14, against Sri Lanka in UAE, the series was all but lost till that final hour of the series at Sharjah that recorded a record run chase under fading light.

To his credit, Misbah did manage to beat England and Australia, the reigning number one ranked Test sides at that point, while Imran didn’t manage to achieve any such feat at home. On the flip side, nothing can match the stature, pressures and level of competition of an India Pakistan series. Historically, India and Pakistan series made or broke many a careers on either side of the border and Misbah never went through that test of strength and toughness as a Test Captain. He never faced the arch rivals, India, in either home or away Test series – a test that Imran took and came out with flying colors.

If the current rankings of the teams are added to this comparison, South Africa of Misbah’s tenure can be equated to West Indies of Imran’s time. While the competition between South Africa and Misbah’s men remained mostly one-sided against Pakistan, Imran did manage to raise his men as not only competent opponent but also a genuine threat to that fearsome West Indies side.

If Imran had the luxury to inflate his records by playing much lower ranked sides like Zimbabwe, Bangladesh and West Indies of this decade, and if he wouldn’t have to deal with the dodgy umpiring on away tours, Imran’s number would have definitely looked much better.
On the other hand, had Misbah succeeded in preventing Zimbabwe and West Indies from a series loss in their own backyards and if he had managed to win the series against South Africa and New Zealand by not losing the final Tests of the series, his numbers would have carried more weight and context.

Imran Khan earned his stature by becoming the first Pakistan captain to defeat India in India and England in England. Misbah also has a chance to join that league, only if he manages to become the first Test captain of Pakistan to defeat Australia in Australia and West Indies in West Indies in the forthcoming tours. But as it stands, Misbah looks to have clear edge on quantitative basis but on qualitative basis, Misbah ul Haq still has a lot to do to come even close to the greatness of Imran Khan as a Test captain.