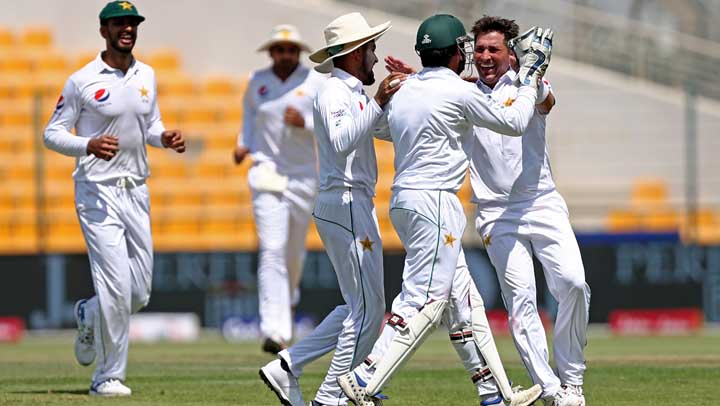 The 31-year-old dismissed Lahiru Thirimanne leg before for nought in the first session to reach the milestone in his 27th Test match, equalling the mark of illustrious countryman Waqar Younis.

Australia’s Sydney Barnes holds the record as the quickest to 150 Test wickets, achieving the figure in his 24th Test at Durban in 1913.

But Shah is the quickest spinner to the landmark as both Barnes and Waqar were fast bowlers.

Since making his Test debut against Australia at Dubai in 2014, Shah has been the main wicket-taker for his team. He claimed 19 scalps in Pakistan’s 2-2 series draw in England last year.

That result briefly lifted Pakistan to world number one in the Test rankings, resulting in the leg-spinner receiving a national cricketer of the year award.

Shah also took 24 wickets in Pakistan’s 2-1 win in Sri Lanka in 2015 and followed that up with another 25 in three Tests in the West Indies earlier this year.

He was also the joint second fastest to 100 wickets, reaching the mark last year after just 17 Tests.

England’s George Lohmann racked up 100 Test wickets in 16 matches in the 19th century, while Australian duo Charlie Turner and Clarrie Grimmett needed a mere 17 Tests, like Shah, to bring up a century.

English county scores on Tuesday, May 2

Bayliss backs Farbrace to succeed him as England coach

Holder looks to McGrath and Anderson for inspiration

The not so nervous nineties