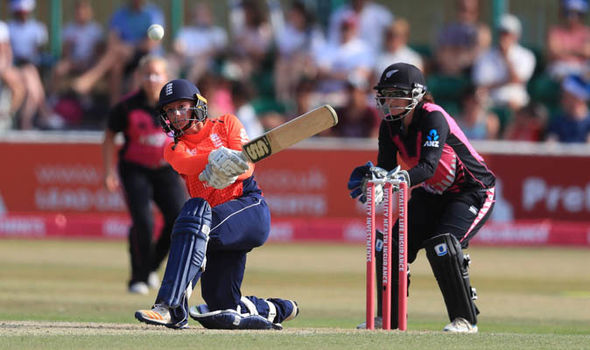 London: A fine half century by Danni Wyatt propelled England’s women’s team to a routine seven wicket win over New Zealand in the T20 Tri-Series final at Chelmsford on Sunday.

Victory maintained the women’s team’s outstanding record at the ground they call ‘Fortress Chelmsford’ as they have won all 13 games they have played there since 2000.

Kiwi captain Suzie Bates, who won the toss and opted to bat, said England were on another level to her team.

“We thought we got off to a really good start, we knew we had to bat well but they just kept coming at us and putting pressure on with the ball and in the field,” she said.

“They’ve just been too good for us in all three games.

“We’ve just got to get better for the World T20 because the middle over is going to be crucial on those slower wickets.”

Wyatt struck exactly 50 — her joy at reaching a half century dulled immediately as she was then out caught by former Scotland off-spinner Leigh Kasperek off Suzie Bates bowling — as England had no trouble reaching the modest target of 137-9.

New Zealand bowler Amelia Kerr briefly halted their progress with two wickets off successive balls but there were raised eyebrows New Zealand’s main strike bowler Lea Tahuhu didn’t come on until the 14th over and then only lasted one before being taken off.

Earlier Katherine Brunt snapped up two wickets to stem a blistering start by the New Zealanders — firstly Sophie Devine went for an entertaining 31, leg before, and then Katey Martin was also trapped leg before for two.

“I’d like us to start better, we saw how well the Kiwis got out of the blocks but that over from Brunty was outstanding, and we were just clinical through the middle,” said Knight.

“There have been loads of individual performances, everyone’s stood up at different times and the more we can do that, the more consistent we’ll be.”

They failed to use a solid launching pad of 84-2 at the halfway point and instead their innings disintegrated.

Sophie Ecclestone bagged the crucial wicket of Kiwi skipper Bates, bowling her for 31 and no one who came after her was able to get any more momentum going.