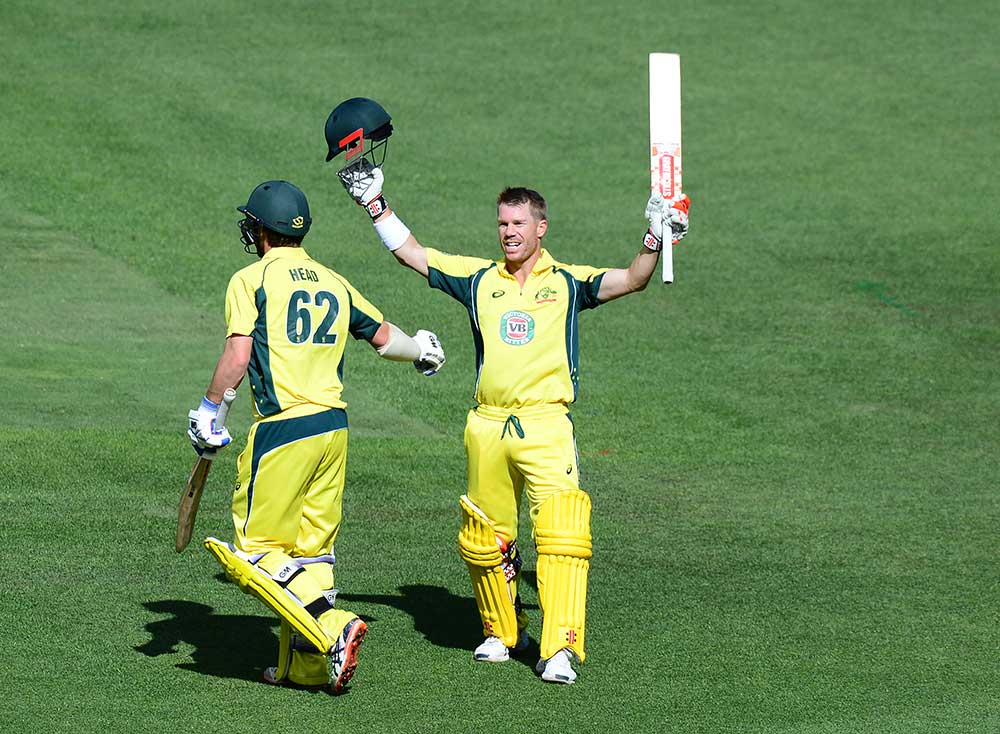 Warner man of the series as Australia thrash New Zealand

The Australian vice-captain was run out on the last ball of the innings for 156 off 128 balls — more than half of his team’s 264 for eight total — with 13 fours and four sixes.

It follows Warner’s 119 off 115 balls against the Black Caps in Canberra on Tuesday.

Starc then led Australia to a series clean sweep helping to skittle New Zealand for 147 off 36.1 overs to reclaim the Chappell-Hadlee Trophy.

Starc bowled Henry Nicholls and Colin Munro with unplayable yorkers and then trapped Mitchell Santner leg before wicket with reverse swing to finish with three for 34.

Warner, with 299 runs at 99.66 from the three matches, was named man of the match and man of the series after raising his 11th ODI century and seventh for the year.

Only Indian great Sachin Tendulkar, with nine in 1998, has hit more ODI centuries in a calendar year.

“It’s a team performance,” Warner said. “Credit to the bowlers for coming out and executing the plans.

“Our batsmen had to relay the message and they did extremely well.”

Warner was the difference after New Zealand had made early inroads into the Australian batting.

He was involved in partnerships with George Bailey (62) and Travis Head (105) which helped Australia fight back from 11 for two and 73 for four.

Warner gave a tough chance on 18 when he pulled Lockie Ferguson to deep mid-wicket, where a diving Nicholls couldn’t take a difficult low catch.

Then Australia’s bowlers finished off the job with Starc in deadly form and supported by paceman Pat Cummins, medium-pacer James Faulkner and part-time spinner Travis Head, all with two wickets.

Cummins claimed the wicket of opener Tom Latham for 28, snapped up by Faulkner at backward square leg.

Faulkner got the prized wicket of Kane Williamson, leg before wicket for 13 with the New Zealand skipper losing a review in the process.

Martin Guptill chased a wide delivery from Head, and Bailey snapped up a leaping catch at short cover for 34 off 40 balls.

Eleven balls later Starc bowled newcomer Nicholls with a wicked late-swinging yorker for three to reduce the Black Caps to 83 for four in the 17th over.

Starc then ripped through the defences of Colin Munro and trapped Santner leg before wicket to wreck the Black Caps hopes.

Captain Steve Smith sealed the victory with another stunning one-handed flying catch at slip to dismiss Trent Boult off Cummins.

“The catch wasn’t a bad one. It was a nice way to finish,” Smith said.

“We have put up a pretty complete performance in all three games. We needed to improve after (losing 5-0 to) South Africa.

The Black Caps began strongly and dismissed Aaron Finch and Smith cheaply before Bailey revived the innings with Warner.

Bailey spooned a catch to Santner at mid-wicket off Colin de Grandhomme for 23 and two balls later Mitchell Marsh was out in bizarre fashion when he inside-edged off his back pad and onto his stumps for a duck, after his power-hitting 76 off 40 balls in Canberra.

Head maintained his consistent series with a fighting 37 off 70 balls before he was bowled by spinner Santner, after scores of 52 in Sydney and 57 in Canberra.

Matt Wade chipped in with 14 and Faulkner 13 before Warner was the last man out attempting a single off the final ball only to be run out by Boult, who finished with three for 49.

“There has been a player in the Aussie side who has contributed in every game,” Williamson said.

“We did want to show signs of improvement, which is why today’s performance was especially disappointing.”