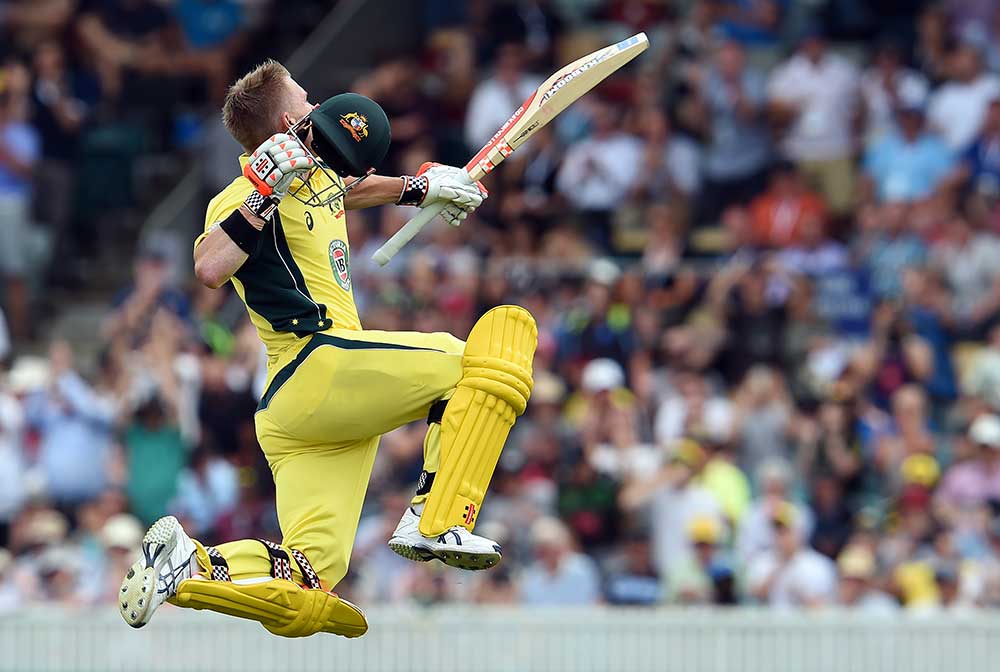 Canberra: David Warner slammed his sixth one-day century of the year to lead Australia to a crushing 116-run victory and reclaim the Chappell-Hadlee Trophy series off New Zealand on Tuesday.

Warner smashed 119 off 115 balls to propel the Australians to an imposing 378 for five after being sent into bat. They then bowled out the Black Caps for 262 off 47.2 overs at the bat-friendly Manuka Oval.

New Zealand had to win in Canberra to keep alive their hopes of retaining the trophy after losing by 68 runs in the opening game in Sydney on Sunday.

Warner led the way in Australia’s third-highest ODI total and was supported by skipper Steve Smith’s 72 off 76 balls and Travis Head’s 57 from 32 balls, while Mitchell Marsh bludgeoned seven sixes in a unbeaten 76 off just 40 balls.

The Black Caps made a spirited attempt to chase Australia’s hefty total and were 177 for three when Jimmy Neesham fell in the 31st over for 74, ending a 125-run stand with skipper Kane Williamson.

Williamson was dismissed nine overs later for 81 off 80 balls with five fours and two sixes, and with him went New Zealand’s faint hopes of reeling in the Australian target.

Williamson’s gamble on sending the Australians into bat backfired spectacularly when the home side feasted on a perfect batting wicket.

The pugnacious Warner set the tone with his 10th ODI century — the third century in his last five ODI innings and his first against New Zealand.

“It was a fantastic wicket and once you keep wickets in hand you can make 100 runs in the last 10 overs,” Warner said.

“It was great batting with the skipper (Smith) and running between the wickets. This year is going great.”

Warner was out to a low catch from Williamson at cover off medium-pacer Colin de Grandhomme in the 37th over, ending a 145-run partnership with Smith.

Smith followed up his career-best ODI score of 164 in Sydney with 72.

The Australian skipper, who was struck a painful blow in the groin by a de Grandhomme delivery on 56, sliced to Mitchell Santner at deep point.

Head hit his second half-century of the series before he was caught off Tim Southee.

Marsh provided late fireworks with some prodigious hitting, including three consecutive sixes off Matt Henry in a lusty cameo.

The Black Caps lost both openers by the ninth over, with Tom Latham caught and bowled by Josh Hazlewood for four and Martin Guptill caught behind off Pat Cummins for 45.

Neesham looked in good touch with 74 off 83 balls before he was caught in the deep by Mitchell Starc off Josh Hazlewood in the 31st over.

James Faulkner got Colin Munro to hole out on 11 to long-on, where Marsh took a safe catch, and Starc had de Grandhomme caught behind for 12.

Williamson was deceived by a Pat Cummins slower ball and found Warner in the covers to leave the Black Caps on 232 for six.

Wickets tumbled among the lower order, with Cummins finishing with four for 41 as Australia cruised to victory ahead of Friday’s third and final ODI in Melbourne.

“The ‘death’ overs really hurt us, and Australia have been showing us how to build partnerships.”

No risk of complacency with World Cup looming: Rachael Haynes

Chris Gayle seeks to cash in on Australia court win