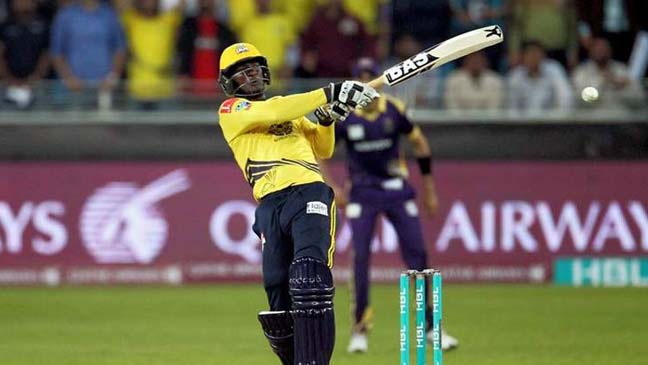 By a Special Correspondent

Darren Sammy batted on one leg but struck a six and a boundary in the last over to clinch a sensational five-wicket victory for Peshawar Zalmi against Quetta Gladiators in the only match of the Pakistan Super League in Sharjah on Thursday.

The Zalmi skipper, who twice hurt his hamstring during bowling, came to the crease with 16 needed off the last seven deliveries. He hit the last ball of fast bowler Rahat Ali’s penultimate over for a six to the long-on boundary.

Ten runs were needed off Anwar Ali’s last over as Usman Khalid took a single off the first ball to give strike to Sammy who smashed a six towards square-leg for six, played a dot ball and then drove the third straight to long-off boundary to seal the victory as a nearly packed Sharjah ground rise to the double World Twenty20 winning West Indian captain.

Quetta also fought hard in a repeat of last year’s final as both teams were in the hunt till the last over.

Peshawar Zalmi were put on track by Tamim iqbal (38-ball 37 with a six and a four and added an invaluable 54 run s for the third wicket with Mohammad Hafeez (34-ball 29).

But when Tamim fell, run out in his last match before leaving for Sri Lanka, Quetta sniffed victory which in the end was snatched by Sammy.

Quetta were helped to 141-8 by Shane Watson and Rilee Rossouw.

Quetta Gladiators found the going hard on a slow pitch after Peshawar won the toss and put them into bat, managing just 31 runs in the last five overs.

Watson hit five sixes during his knock after he was reprieved by Sammy at extra cover off Mohammad Asghar. That lapse cost Zalmi dearly as Watson added 50 for the second wicket with Umar Amin who made only ten.

Rilee Rossouw (25-ball 37 with two sixes and as many boundaries) and skipper Sarfraz Ahmed added 42 for the fifth wicket but Umaid Asif broke the partnership as well; as had Mohammad Nawaz for three to check the flow of runs.

Sammy (2-21) had to leave the field after twice falling in his follow through, apparently hurting his hamstring. Wahab Riaz, Sammy and Umaid took two wickets apiece.

Unbeaten Karachi Kings will take on Multan Sultans — two wins in three games — in the first match on Friday. A win-less Lahore Qalandars will meet Islamabad United in the second match.

Root delight as his 226 sets up England final day push