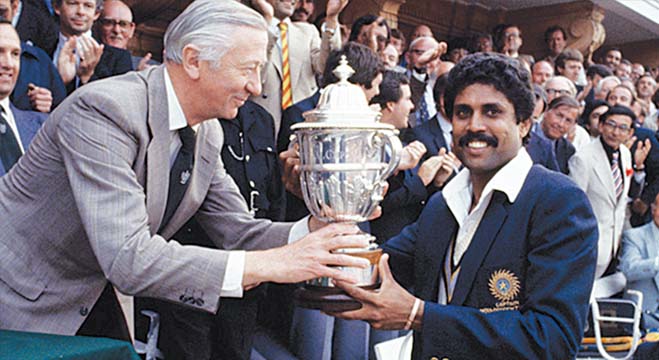 The third World Cup, again sponsored by Prudential, saw the company put £500,000 into the kitty. The total attendance rose to 232,081, but the number of matches was substantially increased, each team in the group playing six games instead of three. Again the competition was staged in England, with one team change from the previous tournament: Zimbabwe replaced Canada. The weather was much kinder than in 1979, though England suffered a very wet May.

The sensation of the first batch of matches came at Trent Bridge where Zimbabwe beat Australia by 13 runs. The Zimbabwean captain Duncan Fletcher rescued his side from a poor start with an innings of 69 and the total was 239-6. Fletcher then took four for 42 as Australia struggled against some accurate howling and good fielding. India also caused an upset by beating the West Indies at Old Trafford. For once, the Caribbean batting was not up to the mark, Andy Roberts and last man Joel Garner being their highest scorers as India won by 34 runs.

In the first semi-final, India met England at Old Trafford. To everyone’s surprise, the England batting failed to score with any authority against a modest Indian attack and India had no trouble in reaching their target of 214, Yashpal Sharma hitting 61.

In the other semi-final, Pakistan had the more difficult task of scoring from the formidable West Indian attack. Mohsin Khan made 70, but no one stayed with him and the West Indies were left needing 185. Viv Richards was in top form, making 80 not out as his team won with 11.2 overs and eight wickets in hand.

In the final, India lost the toss and were asked to bat first against a West Indies team that arguably boasted the world’s best bowling attack. Only Krishnamachari Srikkanth (38 from 57 balls) and Mohinder Amarnath (26 from 80 balls) put up any significant resistance as Roberts, Marshall, Joel Garner and Michael Holding ripped through the Indian batsmen, ably supported by Gomes. Surprising resistance by the tail allowed India to compile 183 (all out, 54.4 overs). However, the Indian bowling exploited the weather and pitch conditions perfectly to bowl out the best batting lineup of the era for 140 from 52 overs in return, winning by 43 runs and completing one of the most stunning upsets in cricket history.

Amarnath and Madan Lal each took three wickets, and one memorable moment was the sight of Kapil Dev running about 20 yards (18 m) to take a catch to dismiss Richards, the West Indies’ top scorer with 33 from 28 balls. Amarnath was the most economical bowler, conceding just 12 runs from his seven overs, while taking 3 wickets, and was once again awarded the Man of the Match award for his all-round performance.