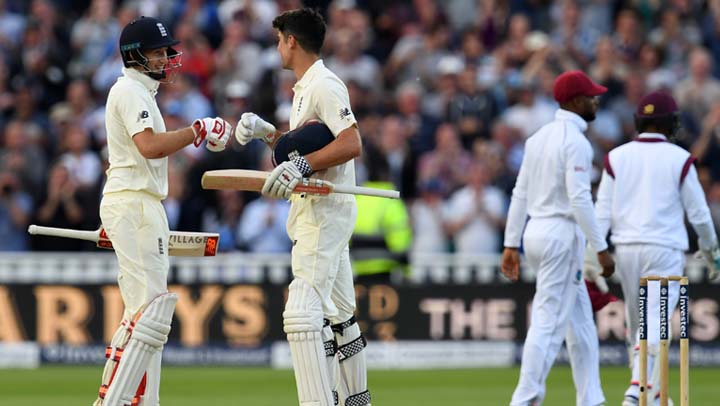 Birmingham: Alastair Cook and captain Joe Root both scored hundreds as England dominated the West Indies in the inaugural day/night Test on English soil at Edgbaston on Thursday.

England were 348 for three at stumps on the first day of what is just the fifth day/night Test worldwide.

The past and present England skippers had come together with their side faltering at 39 for two after both debutant Mark Stoneman and Tom Westley had been dismissed for eight.

Dawid Malan, given a reprieve on two, was 28 not out at the close.

“Today was about making sure if we got into a position of strength and drive it forward,” Root told Sky Sports.

“After the start, it felt like a one-dayer, because we got off to a flier. The atmosphere was electric and for Cooky to be 150 not out is great.”

Boundaries flowed throughout the day and West Indies bowling coach Roddy Estwick admitted: “We didn’t have one of our better days. We were poor.

“If you are conceding 53 boundaries in a day it shows a lack of discipline.”

For Cook, already England’s leading Test run-scorer and century-maker, this was his 31st hundred at this level.

The West Indies, Test cricket’s dominant force in the 1970s and 1980s, have long struggled away from home.

During the past 20 years, excluding matches against Bangladesh and Zimbabwe, they’ve won just three out of 86 Tests outside the Caribbean.

They arrived in England without several star players, the legacy of a bitter dispute with West Indies administrators and the lure of the Caribbean Premier League Twenty20 tournament that is taking place at the same time as this series.

Yet they still had two early wickets under sunny blue skies that promised ideal batting conditions.

But that was as good as it got for Stoneman, brought in after England dropped Keaton Jennings following a run of low scores during the preceding 3-1 home Test series victory against South Africa.

Roach clean bowled Stoneman with a superb ball that pitched on middle stump and clipped the top of off.

Westley was then lbw on review to Miguel Cummins.

Cook and Root, however, repaired the damage.

After lunch, Root went to an 83 ball-fifty when a flashing cut off opposing skipper Jason Holder flew through the slips for four.

Root, who made 190 against South Africa in his first match as England captain at Lord’s last month, pulled off-spinner Roston Chase to fine leg for a ninth boundary that saw him complete his 13th Test century in 139 balls.

Cook then went to an understated but no less valuable 182-ball hundred with a single off Chase.

For all the talk of what the pink ball might do and the difficulties of batting in twilight, it looked as if England’s top-order mainstays would both get through to the close.

Root, however, was bowled between bat and pad by the persevering Roach.

The West Indies’ woes intensified when paceman Holder left the field with a neck injury midway through bowling an over before Cook’s legside clip off fast bowler Alzarri Joseph, his 23rd four, took him to 150.