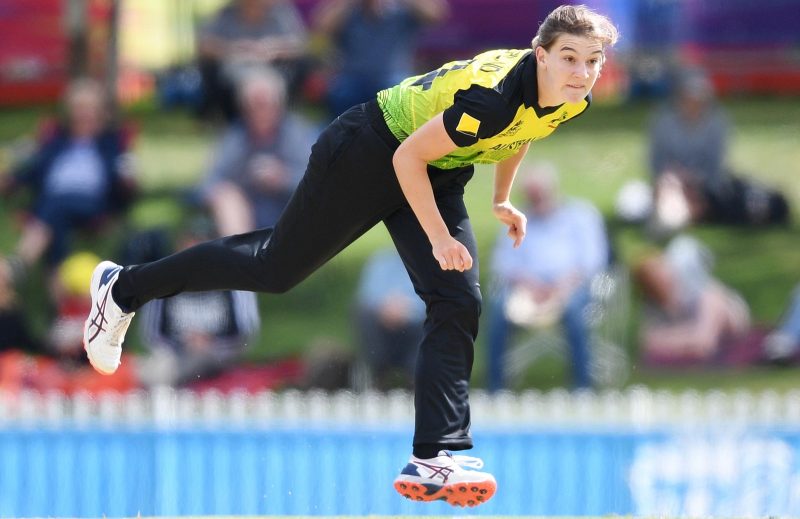 Sutherland feels the need for speed after golden summer

She’s won a World Cup, danced on stage with Katy Perry and bowled to Sachin Tendulkar all before her 19th birthday, but teenager Annabel Sutherland has already set her sights on her next target – being among the fastest bowlers in the country.

Sutherland will use her first full pre-season as a professional to push along her quest to break through the 120km/h barrier, which would put her in the top echelon of quicks in the women’s game.

Sutherland is regarded as one of the most prodigious young talents in Australian cricket, with her new international teammate Ellyse Perry tellingcricket.com.au earlier this year that the 18-year-old “could be one of the best we’ve ever produced”.

Still fresh out of high school, Sutherland knows that pace will only come when she adds more muscle to her lean frame, which will be one of her main points of focus when she returns to training with Victoria next week.

The advent of professionalism in women’s cricket in recent years and advancements in sports science could see the pace race in the female game heat up over the next decade.

Among current players, Sutherland’s state and national teammate Tayla Vlaeminck can consistently pass the 120km/h mark, while South Africa’s Shabnim Ismail and New Zealand’s Lea Tahuhu have both been recorded in excess of 125km/h.

However, professionalism doesn’t necessarily equal pace; former Australia allrounder Sharon Tredrea is said to have bowled well in excess of 130km/h during the 1970s and 1980s, while Cathryn Fitzpatrick believes she could top 125km/h at her peak.

Sutherland says she can already bowl up to 115km/h, but knows pushing that even further will help take her game to a new level.

“If I could get up to around 120, that’s a pretty competitive pace to have,” she said.

“You see with players like Tayla Vlaeminck – she’s probably one of the quickest at the moment going around – how much those extra kilometres make a difference.

“There’s not a lot of players out there who can bowl with that sort of pace and it certainly challenges the batters a bit more. A couple of extra Ks would be nice.

“It’s something that will come in the next few years, hopefully.

“It comes with building my strength as a base in the gym, so it’s been nice over the last couple of months (of isolation) to have a solid period to work on my fitness.

“Certainly, that’s something that I’m looking to build into my game and work on.”

Having enjoyed ‘the best two months of her life’ last summer, Sutherland was recently handed her first full Cricket Australia playing contract, underlining the esteem in which she’s held around the country.

Despite having minimal impact in the six T20 internationals she played earlier this year, aside from the impressive unbeaten 22 off 11 she scored on debut to force a Super Over against England in Canberra, some of her peers have already seen enough to be convinced she has the makings of a long-term international star.

“She’s already fulfilled a lot of that potential and it’s scary to think how much further she can go,” said Perry, who has already acted as a mentor to her younger teammate.

“She’s a wonderful athlete, she’s got a great build, she bowls fast and into the wicket and is able to swing it.

“To think that she’s only had such a small amount of experience at this level, but she already looks capable and comfortable.

“Time is only going to make her better … I’m really pumped that she’s getting the opportunity when she is, because I think she could be one of the best we’ve ever produced.”

Sutherland’s addition to the 15-player CA contract list adds to the depth of pace-bowling allrounders at Australia’s disposal, along with Perry, Nicola Carey and Tahlia McGrath.

And in Perry, who is hoping to be fit for the start of the home summer after recently having hamstring surgery, Sutherland has the ideal teammate on which to mould her own game.

“She’s accomplished a lot in her career and is a freak athlete,” Sutherland said.

“She’s very good to have around the group, not just for her cricket but also a person. She’s helped me with my game and has always been willing to throw me balls and have a chat when I need to ask questions.

“Given she stuck around for those last few games (of the World Cup) and couldn’t be on the field (due to injury) just shows how much she cares for the group.”