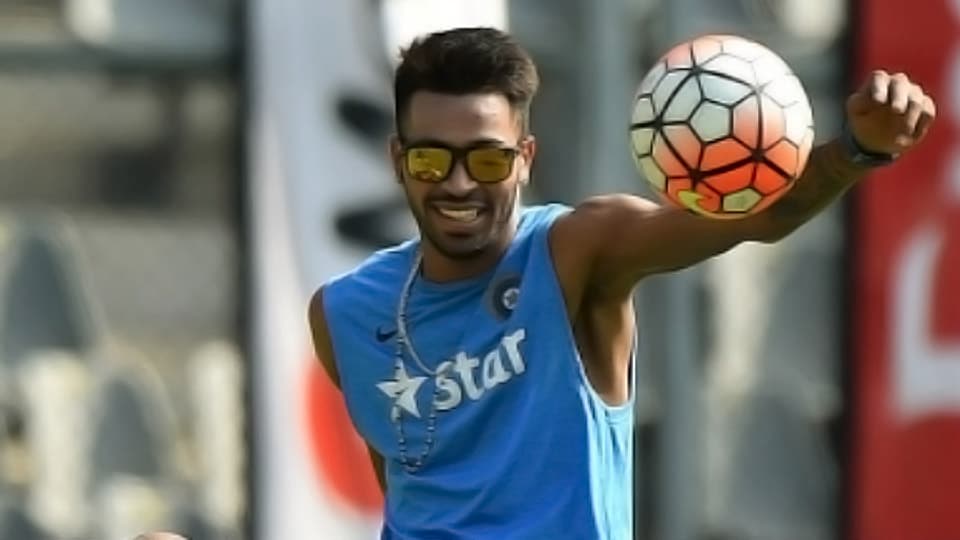 London: Virat Kohli has backed Hardik Pandya to showcase his credentials as the future of Indian cricket with another swashbuckling display against Sri Lanka on Thursday.

Pandya has emerged as one of India’s most promising talents since making his debut last year and Kohli sees signs his young prodigy is ready to take his development to the next level.

Having played a key role in Mumbai Indians’ IPL triumph earlier this year, the 23-year-old all-rounder underscored his rapid emergence by making a bright start to his country’s Champions Trophy campaign

In an indication of the level of respect he is already held in by Indian captain Kohli, Pandya was prompted up the batting order ahead of the great MS Dhoni and responded by smashing 20 not out of just six balls in Sunday’s 124-run victory over Pakistan in Birmingham.

Pandya wasn’t finished there and he chipped in with two key wickets as holders India launched their title defence in swaggering style.

With India due to play their second Group B match against Sri Lanka at The Oval on Thursday, Kohli suggested Pandya is well on his way to become one of his country’s finest players.

“He’s a real asset to Indian cricket. It’s very hard to find someone who can almost touch 140 Ks and who strikes the way he does,” Kohli told a press conference at The Oval on Wednesday.

“He can bat through the innings as well. It’s really hard to find people with that kind of ability.

“Once you have a player like that, you need to make sure he’s always committed to give 100 percent for the team.

“That comes naturally to Hardik. So you don’t need to motivate him any further in any other way.”

Pandya’s boisterous personality and fun-living lifestyle has irked some of the more conservative figures in Indian cricket.

“People should appreciate his skill and what he brings to the table,” he said.

“A lot of people focus on a lot of other things with Hardik, which I don’t think should be anyone else’s problem. He has his own journey, and he’s finding his own way.

“If he gets the kind of support that a player like him should get, I think he could go down as one of the most accomplished Indian cricketers in times to come.

“He’s superb in the field, superb with the ball, brilliant with the bat.

“The kind of balance he brings to the team is priceless.”

With Pandya to the fore, Kohli’s team are expected to beat Sri Lanka en route to retaining the Champions Trophy.

Even Sri Lanka skipper Angelo Mathews admitted his side are underdogs, but Kohli wants his team to guard against complacency.

“At the moment we are playing some good cricket, but that doesn’t mean that we play with arrogance,” Kohli said.

“We respect every opposition the same way, and we intend to play the same kind of cricket against everyone.

“This tournament being the top eight teams in the world, you certainly cannot even think of taking anyone lightly.”

Having crushed arch rivals Pakistan, India must avoid a let-down on Thursday and Kohli is confident they will be able to play with the same intensity at The Oval.

“I don’t see the environment getting flat after the first game,” he said.

“Sri Lanka are going through a transition phase, but they have the sort of players that can deliver match-winning performances.

“We know complacency can come in. We addressed those things and asked the guys to be ruthless and finish games off.”